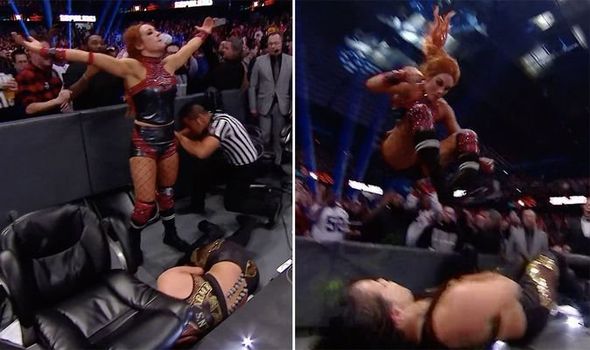 The Queen of Spades picked up the win after making Bayley tap out to a Sleeper Holder following an impressive performance.

The former UFC star then celebrated her victory at ringside where Lynch was laying on the floor and stood on one of the announce desk with her title belt held above her head.

But The Man didn’t take the defeat well as she pulled the winner’s legs and dropped her on the table.

The four-time women’s champion then threw the NXT star to another desk and climbed on one of the guard rails.

That was when the former SmackDown Women’s Champion jumped on her rival and slammed her through the table with a Legdrop.

Lynch then picked up her RAW Women’s Championship and exerted her dominance as she yelled that this was still her show. 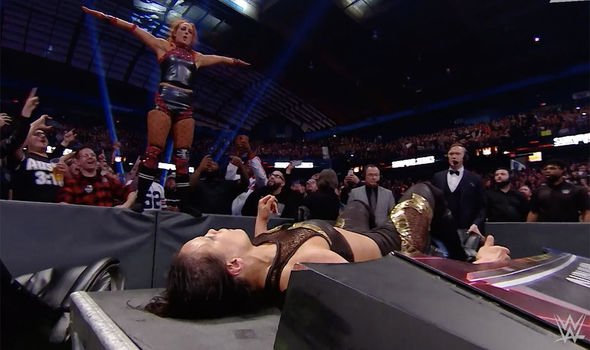 WWE commentator Michael Cole teased an imminent Singles Match between the two competitors as he pointed out that Baszler never defeated The Irish Lass Kicker.

The Limerick-born star’s rivalry with the MMA hero stems from WrestleMania 35 during the first ever all-women’s main-event match in the show’s history.

Rousey is a close friend of Baszler and her name keeps getting mentioned every time the two stars come face-to-face.

Rumours suggest that this feud could also lead to the UFC Hall of Famer’s return to the WWE.

Rousey hasn’t been seen since WrestleMania as she has taken an extended sabbatical.