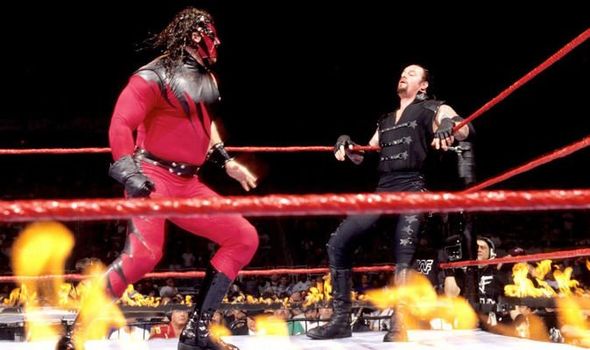 WWE legend Kane has shared the untold story about the first ever Inferno Match against The Undertaker where he caught on fire. The Big Red Machine and Undertaker were undergoing a gruelling feud in 1998 which culminated at Unforgiven were they faced off in a ring surrounded by flames.

The purpose of the fight was to set each other on fire and The Deadman emerged victorious when he set his scripted brother’s arm ablaze.

Kane, real name Glenn Jacobs, opened up about the backstage story behind that dangerous encounter and revealed that WWE had hired some stunt men from Hollywood to help them prepare.

But even those experts were shocked with the premise of the match especially because there was only one rehearsal for such a dangerous spot.

The three-time world champion underwent a trial where he lit up his arm and was instructed how to run to the back.

JUST IN: Arsenal stance on Massimiliano Allegri could change due to former Juventus boss’ comments 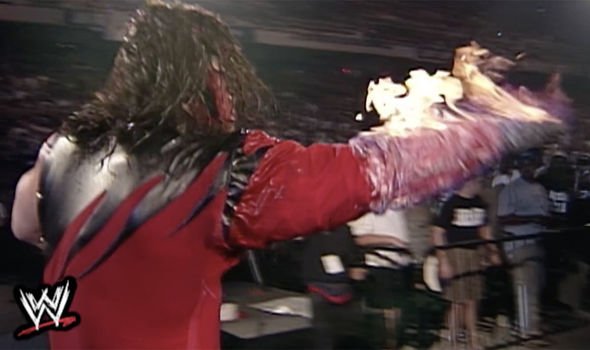 The ex-WWE Champion was ordered not to keep his arm forward because then he would breathe the flames and faint.

Kane told Pardon My Take: “Even the first Inferno Match — I talk about it in the book — basically I’m gonna have my arm lit on fire.

“That’s not really a natural thing to do, right? Glenn isn’t [born from fire] Kane might be.

“So we have some Hollywood stunt people come in and we’re rehearsing that day.

“So we did a rehearsed burn outside where they put everything on.

“I’m looking at my arm and there’s like real fire on it and they’re telling me like I go to move and they’re like ‘NO, NO DON’T DO THAT!’

“You gotta move this way and keep your arm behind you because if you put it in front of you you could inhale the flames, right?

“So here’s the thing. I have to go out there and do a 20-minute match.

“Do all this stuff then do this stunt that I’ve never done before except in a rehearsal in front of a live audience of 15,000 people and millions watching on pay-per-view and I have to keep all this stuff straight in my mind, right?”

The Inferno Match hasn’t been featured on WWE shows since 2013 due to its violent nature and because a large chunk of the WWE audience consists of children.

Undertaker hasn’t retired yet but only wrestles on a part-time basis due to his advanced age of 54 and the long list of injuries he has suffered throughout his three-decade-long career.