Undertaker and the WCW legend faced each other in Saudi Arabia but their dream match didn’t live up to the hype as it was plagued by errors that could have seen both wrestling heroes getting seriously hurt.

Taker won the match with a lacklustre finish to the bout that saw Goldberg suffering a concussion, getting his head busted open and collapsing at ringside after the bell.

The failed fight attracted plenty of criticism from the WWE Universe as many fans demanded from both legends to retire.

However, Jericho defended his fellow wrestling greats as he described them as “top level performers and money draws”.

Both @undertaker & @Goldberg are once in a lifetime, TOP LEVEL performers and money draws

The AEW star also insists that even though The Deadman and Goldberg are no longer at their peak they are still better than most of the rest of the talent.

Y2J even compared them to Jagger and Osbourne who still perform in concerts with Rolling Stones and Black Sabbath respectively despite their advanced age.

Jericho tweeted: “Both @undertaker & @Goldberg are once in a lifetime, TOP LEVEL performers and money draws.

“And even though they might not be at their peak & had an outing that wasnt perfect, they are still better than most. 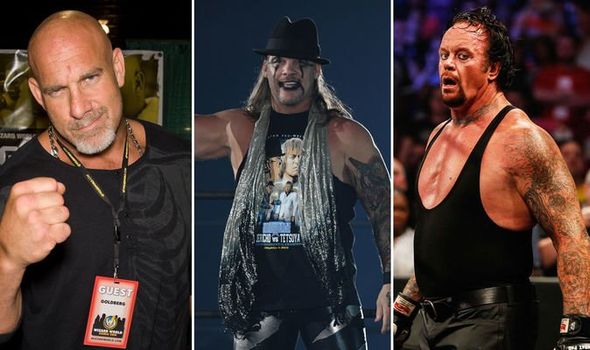 Goldberg seemed to have retired from in-ring competition last year after being inducted into the WWE Hall of Fame.

However, Undertaker still wrestles on a part-time basis despite his advanced age of 54 and the long list of injuries he has suffered throughout his near three-decade-long career. 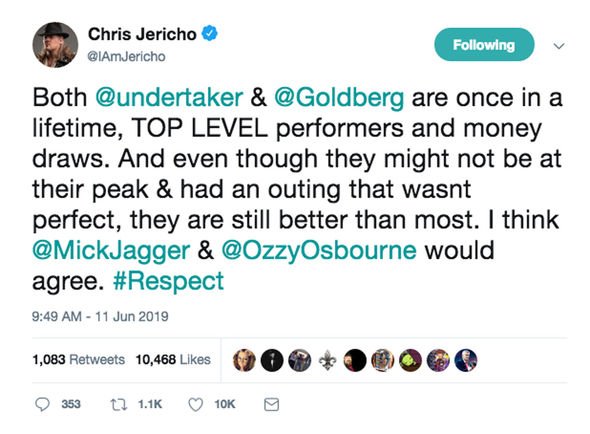 It appeared like The Phenom had retired at WrestleMania 33 when he lost only his second ever match at Mania to Roman Reigns.

The six-time world champion broke character after the fight as he laid down his dark jacket, gloves and hat in the middle of the ring before saluting the crowd.

However, the ex-WWE Champion returned at WrestleMania 34 where he destroyed John Cena.