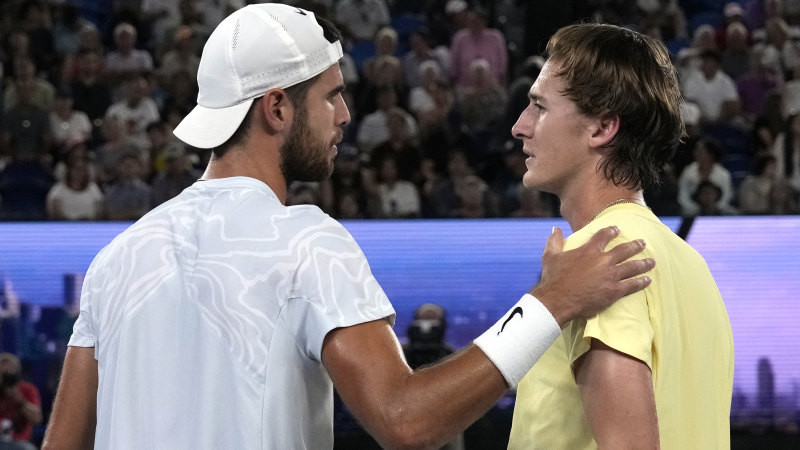 Rising American Sebastian Korda would empathise with the concept of intra-family championships. His father, Petr, won the 1998 Australian tennis Open in what was his Indian summer, his mother Regina was a top-30 player and his elder sisters Jess, 30, and Nelly, 24, have both won Australian Opens in golf. 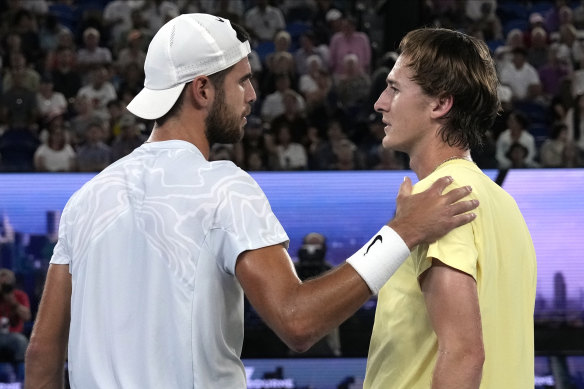 Karen Khachanov consoles Sebastian Korda as his Australian Open comes to an end.Credit:AP

Sebastian, 22, was being fitted up for a fairytale fourth chapter at the Australian Open after beating former world No.1 Daniil Medvedev in the fourth round, but the spell was broken on Tuesday when a wrist injury forced him to retire from his quarter-final against the fast-gathering Russian Karen Khachanov.

“It got worse during the match,” he said. “I hit one forehand return and after that it was almost tough to hold the racquet at times.” So Khachanov goes through to his second successive major semi-final and Korda is left to dwell on the fact that although he will leave with a ranking inside his previous high of No. 30, he has zero boasting rights.

“I don’t know where I’m going to be ranked,” Korda said after beating Medvedev, “but my mom’s career high was 24, my dad was No. 2, my sister Nelly was No. 1 and my other sister Jessica was No. 6 – so I’m definitely the worst athlete in the family so far.”

Famous footsteps are hard enough to follow for one generation, let alone two, let alone across pursuits. For the Kordas, who are from the Czech Republic via the US (Petr is still a Czech national), the trail leads to and from Australia, oddly enough. 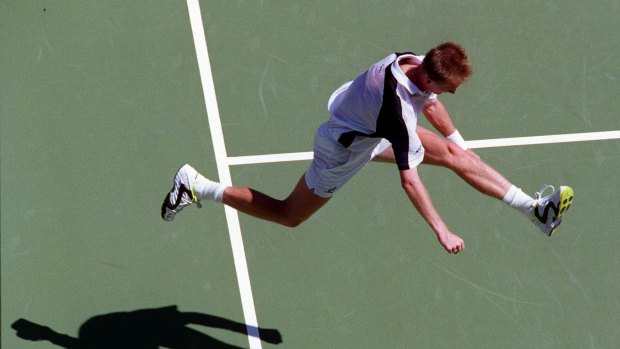 Jess broke through at Royal Melbourne in 2012. Before Nelly won the Australian title at The Grange in Adelaide in 2019, she said she felt “so left out” in family table talk. When she won, she said to her sister on FaceTime: “I’m finally part of the club.” She’s now the world No. 2 in her sport.

The transfer and interchangeability of ball-striking skills between generations, genders, sports and continents is something of a 21st-century phenomenon. The rise of women’s sport has added a layer of intricacy.

In Australia, strands of DNA criss-cross between various football codes, cricket, netball and basketball, to name but some. Daniel Kerr won a premiership and almost a Brownlow Medal, but sister Sam this year might win a World Cup.

You could even throw in links between admirers: just this week, prodigious batsman Steve Smith expanded on how his newly modified grip is akin to Roger Federer’s. 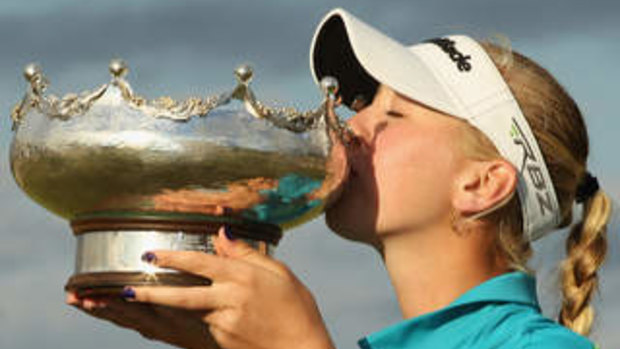 But the Kordas are exceptional. At very least, they are uniquely placed to answer an age-old question about which ball is harder to hit, the speedily onrushing or the provocatively stationary. It’s not as straightforward as you might think.

Veterans of physically punishing sports – tennis is one – often say that they would steer their children into golf, where there is at least equal gain for less pain. The senior Kordas did not nudge their daughters in any particular direction, and there they both are now, ensconced in golf’s top 20.

Nor was Sebastian pushed. His first love in his Floridian childhood was ice hockey. But he was bewitched by tennis when he went with his father to the US Open when he was nine to see Czech compatriot Radek Stepanek play Novak Djokovic in a night match on a packed Arthur Ashe.

“I went back the next day and I said, ‘this is what I want to do’,” he said. “I fell in love with the energy of the crowd, the way the sport is played, how mental it is. Yeah, just the rest is history.” 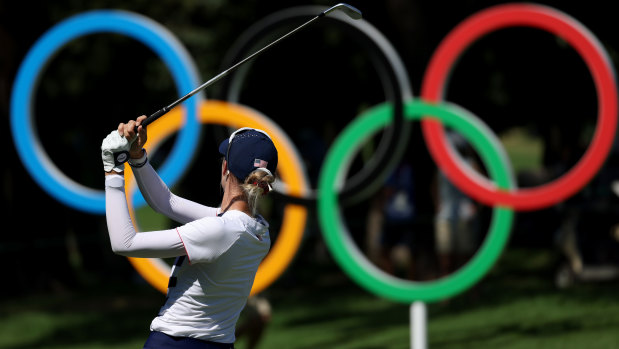 Petr coached Stepanek, who was once in the top 10 and who now coaches Sebastian. Sebastian has on occasions caddied for his sisters. He plays golf left-handed, like his father, but at tennis is a right-hander like his sisters at golf.

And Petr’s old manager, Patricio Apey, now manages all three siblings. The strands of their narrative are not merely tightly woven, they’re knotted.

At 196 centimetres, Sebastian looks like a stretched out version of Petr. When walking down the Hall of Champions to Rod Laver arena, he makes a point of touching the pillars featuring his father and Andre Agassi, another mentor. “Kind of makes me feel like they’re with me in a way,” he said. “I always know that they’re watching. They’re both very special for me.”

He won’t make that walk for another year now. Khachanov shaded him in the first set, but Korda toughed it out and a tie-breaker was needed to decide it. But from a mishit return early in the second set, Korda knew he was toast. A twinge he’d felt in Adelaide two weeks ago had receded, but flared again. 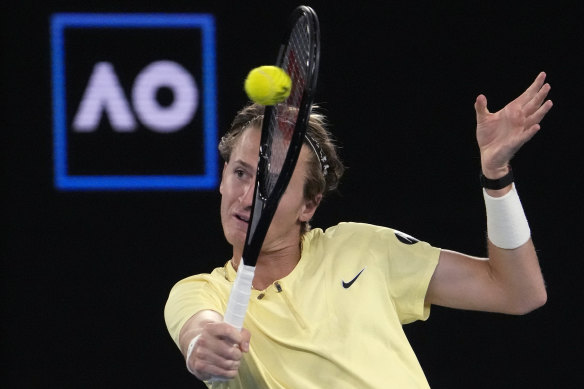 Nonetheless, he was encouraged. “I was playing some really good tennis,” he said. “Probably no one wanted to play me right now. I think I can do some really big things in the near future.”

The Kordas stay in year-round, 24-hour worldwide touch, monitoring each other’s results as they move between hemispheres and time zones, calling when they can but always mindful of pros’ routines. Petr acts as a kind of switchboard.

Nelly rose before her alarm one morning this week to watch Sebastian’s eclipse of Medvedev from the players’ dining room at Orlando. But Sebastian’s match on Tuesday was late in the Florida night, which might have been just as well.

Nelly, incidentally, literally calls bullshit on Sebastian’s lament that he is the worst athlete in the family. 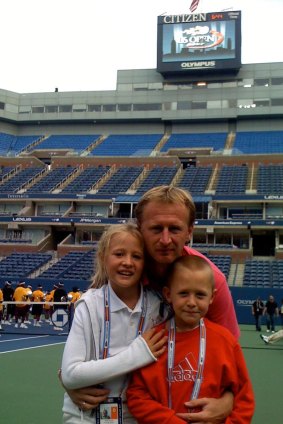 Petr Korda with youngsters Nelly and Sebastian at the US Open.Credit:Instagram

“It’s complete BS. Honestly, he’s the best,” she said. “His hand-eye co-ordination is unbelievable. His swing – I’m jealous of his swing actually. It’s crazy. He’s a lefty. He’s a natural righty, but he plays golf lefty. He played hockey lefty.

“He grew up playing hockey. He was pretty good at it, too. He skates really nicely, plays golf nicely, plays tennis beautifully.”

But as to who is the best Korda, let’s just say it remains an Open question.

For daily updates of all the tennis action during the Australian Open, sign up for our Sport newsletter here.