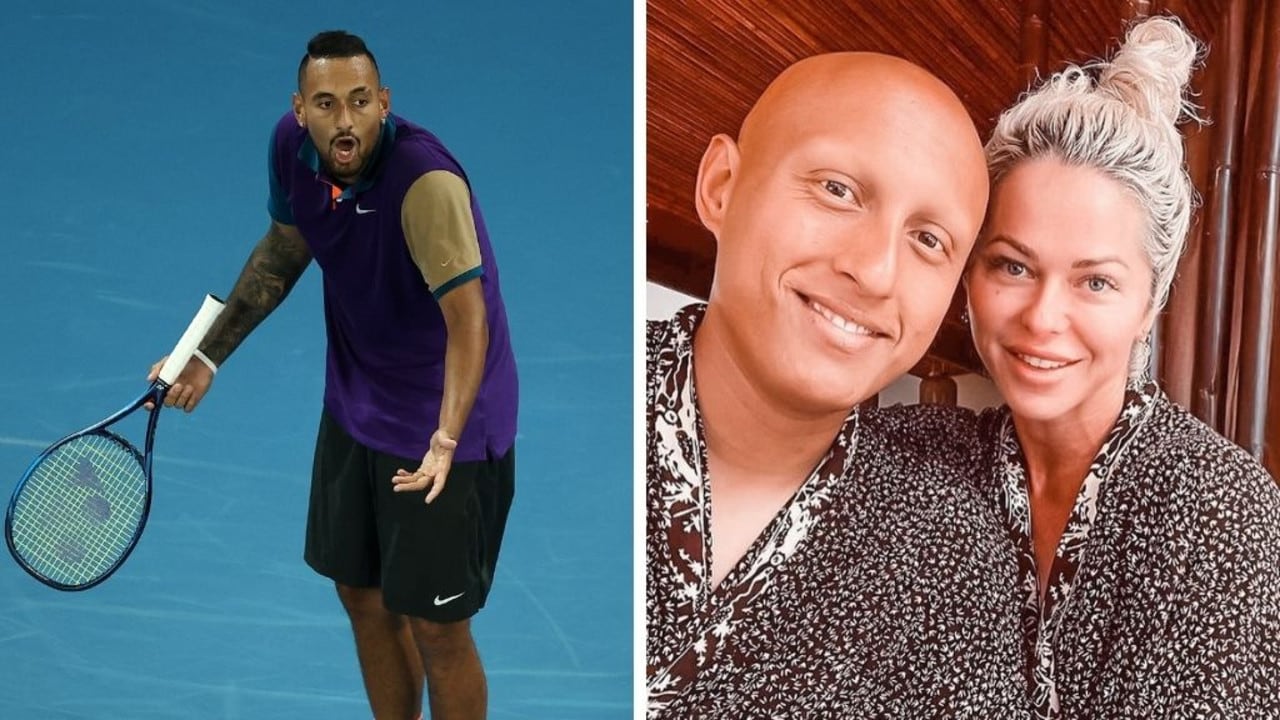 Christos Kyrgios is just as good at making headlines as his younger brother.

For years the visible punching bag of Kyrgios’ angry tirades at his own players’ box, Christos has been his brother’s greatest supporter on and off the court.

Live TV shots of Christos sitting prominently at the front of Kyrgios’ courtside team, predominantly on his favourite John Caine Arena, have made the elder brother one of the quirkiest characters at the Aussie Open in recent years.

He was front and centre again on Monday night when the former Australian Open quarter-finalist appeared to become angry at Christos’ partner Alicia Gowans.

“Tell your girlfriend to get out of my box,” he was heard saying.

Asked about the outburst in a press conference after his 6-4 6-4 6-4 win, Kyrgios said he got carried away in the moment, but denied he was speaking about Gowans.

Christos’ relationship with the boom-serving 25-year-old makes him a regular target for media outlets in January and February hoping for an insight into the most talked about figure in Australian tennis.

However, that visibility appears to scrambled the 32-year-old’s brains in recent years.

Christos on Tuesday became a different bunching bag for Aussie funnyman Dave Hughes after apparently making a demand of $20,000 to speak on the comedian’s breakfast radio show.

According to claims made by 2Day FM Morning Crew breakfast producer Violet on Tuesday’s show, Christos flatly rejected offers of up to $1000 to speak with the popular show, also featuring Ed Kavalee and Erin Molan.

RELATED: Kyrgios laughs off being roasted by Sacha Baron Cohen

Nick Kyrgios took aim at his own team.Source:Supplied

The hilarious exchange left Hughesy spitting out his morning coffee.

“So I messaged him guys, and he says he wants money,” producer Violet said on the live broadcast.

Hughes interjected at this point to poke fun at the flimsy first offer from his own show.

Co-host Molan revealed she and Hughes both offered to chip in out of their own pockets to secure the interview.

“But I said, it’s worth it because that’s the big story of the day,” she said.

Hughes was not impressed.

“We can buy adds for that. He’d want to be entertaining,” he said with a laugh.

“He’d have to do the whole hour. No deal. And let’s hope we still get our headline.”

The extraordinary $20,000 demand has certainly given them that headline.

Christos has in recent years secured other big-money deals during the Australian summer.

His sponsorship arrangement with Sportsbet in 2018 almost saw his choice of clothing banned from the Australian Open.

Tournament boss Craig Tiley said three years ago he would investigate the prospect of banning the Sportsbet-promoting T-shirts worn inside the Aussie Open venues by the older brother.

Despite the tournament already having an official gambling partner, Sportsbet snuck under the radar with Christos wearing different bright blue T-shirts with the phrases “NICK, NICK BOOM”and “QUIET PLEASE”.

Notoriously, Christos’ most controversial moment came during Kyrgios’ blockbuster 2015 Open campaign when he refused to apologise for making a “Kokk” slur towards WTA star Donna Vekic.

Christos Kyrgios was invited on to the Hughesy and Kate show on KIIS FM in 2015 to explain the situation having previously been dumped during an interview with Triple M where he told the show she “loved the “Kokk”.

“So just did a media interview for Nick. Said Donna obviously loved the ‘kokk’ they cut my interview and said it’s the worst thing they have ever heard on air. Ah cheers,” he posted on Facebook at the time.

Nick Kyrgios (right) and his brother Christos in 2014.Source:AAP

Hughes wasn’t accepting Christos’ behaviour back then either after the brother appeared to defend his brother’s crude remark to Wawrinka.

“But Christos, he is not apologising enough mate, and I love Nick and I have always defended him when other people have said he is a goose but even me this time,” he said.

“You’re seven years older than him, you’re his mentor mate, you have to grab your brother and say ‘Mate, you’re trashing your whole career here’.”

When asked by hosts Hughesy and Kate about his Triple M incident, Christos tried to paint it as an innocent slip-up, telling them that he was good friends with Thanasi Kokkinakis and always referred to him as “Kokk”.

“I said that she obviously loved or liked Kokk in the past,” he said. “I am very good friends with Thanasi, so is Nick and we would call him Kokk so they didn’t give me the opportunity to clarify that. They just cut me off then a million media releases were made that I said that she loved Kokk.”