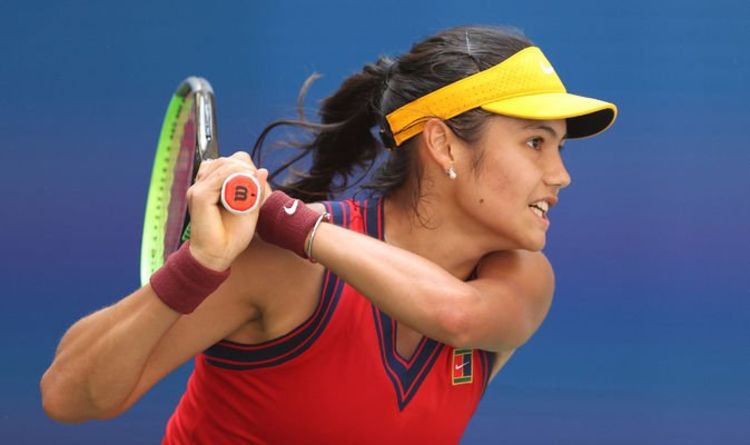 The future looks bright for Emma Raducanu, whose 2021 just keeps getting better and better. After a shock run to the second week at Wimbledon on her Grand Slam debut as a wildcard, she is now in the semi-finals of the US Open and is the first qualifier ever to reach the last four of the women’s competition at Flushing Meadows.

The 18-year-old is yet to even lose a single set in the competition, a remarkable feat considering every one of her opponents so far has been ranked above her.

After knocking out Stefanie Vogele, Shuai Zhang, Sara Sorribes Tormo and Shelby Rogers, the assumption was things would get much tougher as Raducanu drew her first seeded opponent in the last eight.

But even world number 11 and Olympic champion Belinda Bencic could not match the Briton’s energy and determination as Raducanu recovered from an early setback to win 6-3, 6-4.

JUST IN: Raducanu reacts to becoming British No 1 after stunning US Open win

Standing between her and a place in the final is Greek Maria Sakkari, who knocked out Karolina Pliskova in the quarter-finals.

Who is Maria Sakkari?

Raducanu’s next opponent is known as one of the warriors of the women’s game, and will be ready to go deep into the match if needed to grind out a win.

The 26-year-old is ranked 18th in the world and was seeded 17th for this event.

She is yet to reach the final of a Grand Slam in her career, meaning no matter who wins there will be a maiden finalist in the US Open this year.

Her mother Angeliki Kanellopoulou was also a tennis star who was once ranked in the top 50, but Sakkari has surpassed her mother’s achievements in the game already.

She reached the semi-finals at the French Open earlier this year, but nerves got the better of her there. It does mean, though, that she has recent experience of going this far in a tournament – something Raducanu does not.

She has a British coach in Tom Hill and, away from the court, she is dating Konstantinos Mitsotakis – the son of the Greek Prime Minister Kyriakos Mitsotakis.

Will Raducanu beat Sakkari at the US Open?

Sakkari is ranked lower than Raducanu’s quarter-finals opponent Belinda Bencic, so in theory the Briton has already knocked out a tougher opponent in this competition.

But rankings matter little on the court, thankfully for Raducanu who was 150th in the world coming into this tournament.

Sakkari has, as Canadian Bianca Andreescu took her all the way in their fourth round clash with two of the three sets going to tie breaks.

The Greek is comfortable scrapping for every point and has the resilience to draw the game out if needed, something we haven’t seen Raducanu have to do yet in this competition.

Raducanu is the outsider for the clash, but she has been for most of the US Open so far and that hasn’t stopped her dominating each of her opponents.

If the Briton can find a way past Sakkari, she will face either second seed Aryna Sabalenka or fellow teenager and another surprise package, unseeded Canadian Leylah Fernandez, in the final.