Ajla Tomljanovic has set up a first-ever meeting with fellow Australian Priscilla Hon after a straight-sets victory over Stefanie Voegele at the Korea Open in Seoul.

Tomljanovic, fresh from reaching the semi-finals of the WTA event in Zhengzhou last week, coasted past Swiss player Voegele 6-0, 6-2 and now faces Hon, who opened her campaign with a 6-3, 6-4 win over Mihaela Buzarnescu. 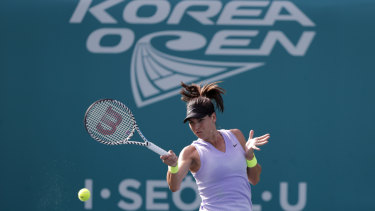 Ajla Tomljanovic had a comfortable win over Stefanie Voegele.Credit:AP

Australian No.2 Tomljanovic lost to Kiki Bertens in the final of last year's tournament and Hon – whose win was her third straight in Seoul after two qualifying victories – expects a tough second-round battle against her compatriot.

"I've trained with her and I know her game and style of play, so it's obviously going to be a tough one."

Top seed Maria Sakkari was forced to withdraw because of a right wrist injury, and lucky loser Danka Kovini was defeated 6-4, 3-6, 7-6 (7-3) by Romanian qualifier Patricia Maria Tig, who continued her impressive return from maternity leave.

The world No.12 was beaten 7-5, 6-2 by her compatriot, who had reached the semi-finals in Nanchang last week.

Top seed Elina Svitolina, though, had little trouble as the Ukrainian world No.3 coasted past Dalila Jakupovic 6-3, 6-3.

In Japan at the Pan Pacific Open, fifth seed Madison Keys booked safe passage into round two with a straight-sets win over Daria Kasatkina, the American defeating her Russian opponent 6-3, 6-4.