New York: Austrian second seed Dominic Thiem has become the first man in 71 years to win the US Open after dropping the first two sets of the final. 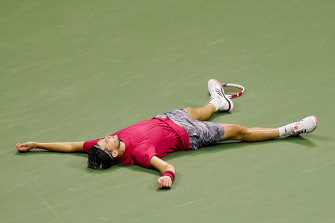 Germany's Alexander Zverev flew out of the blocks and was just six points away from a straight sets victory but was unable to close his first grand slam final out, ultimately falling in a final-set tie-breaker 2-6, 4-6, 6-4, 6-3, 7-6 (8-6).

The US Open had never before been decided by a fifth-set tie-breaker.

Pancho Gonzalez delivered a similar turnaround against Ted Schroeder in 1949 to win the event then known as the US Championships.

Stan Wawrinka's triumph at Flushing Meadows in four years ago was the last time a man outside of Roger Federer, Rafael Nadal and Novak Djokovic tasted success in a major.

Since then, Federer has won three majors while Nadal and Djokovic have won five each.

Azarenka: Nervous to have fans at French Open

What channel is Alabama vs. Missouri on today? Time, TV schedule to watch Tide’s 2020 season opener