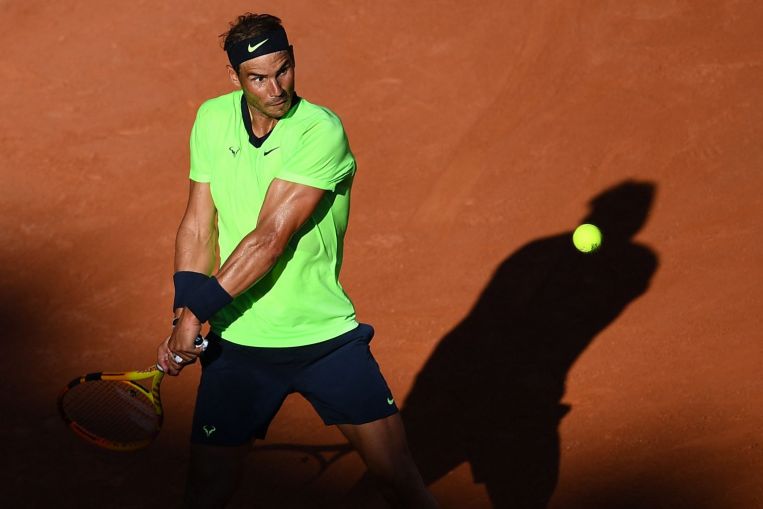 PARIS (AFP) – Rafael Nadal said he is content with being seeded third at Roland Garros, after starting his bid for a 14th French Open title with a comfortable victory over Alexei Popyrin on Tuesday (June 1).

The Spaniard could usurp Roger Federer at the top of the all-time men’s list with a 21st Grand Slam singles title in Paris.

But he has been placed in the same half of the draw as world number one Novak Djokovic, on 18 Slams, and Federer for the first time in their careers.

Nadal insisted though that he has no problem with a seeding system that placed him behind world number two Daniil Medvedev, who had exited at the first hurdle in each of his previous four French Open appearances.

“That’s part of the game, that’s how the ranking works. There is no sport that is more fair than tennis for that,” said Nadal, who is seeded to meet old rival Djokovic in the semi-finals.

“Fair enough, I am the third, Medvedev is the second, Novak is the first. No problem with that.

“I am here to try my best, and when I am the third, you know that you’re gonna have the chance to be in the same part of the draw as the number one or the number two.

“So this time (I) was with the part of the draw of the number one. But (there) still remains a lot for me to face that match, semi-finals.

“I just won my first match, something that I’m happy with.” He started in ominous fashion for his rivals and has still not lost a set at Roland Garros since beating Dominic Thiem in four sets in the 2019 final.

Nadal will take on Frenchman Richard Gasquet, against whom he has won 16 times in as many matches, in the second round.

Questions had been asked about Nadal’s form earlier in the clay-court season when he lost to Andrey Rublev in the Monte Carlo Masters and Alexander Zverev in Madrid.

But he hit back with the Italian Open title, beating Djokovic in the final.

He carried that form into the first two sets against Popyrin, striking 18 winners past the 21-year-old.

But the youngster looked in prime position to force a fourth set, only to miss two set points on his own serve as Nadal showed off his famous powers of recovery.

The reigning champion powered 6-1 clear in the tie-break before securing a second-round spot at the third time of asking.

“The beginning of the match had been very tough too. In these warm and fast conditions it’s always very difficult. He’s young and the speed of his ball is very strong.” It was Nadal’s 101st career win at the French Open, against just two losses – to Robin Soderling in 2009 and Djokovic in the 2015 quarter-finals.