Tennis Australia's decision to celebrate the 50th anniversary of Margaret Court's 1970 Grand Slam at next year's Australian Open looks to have been a reasonably successful attempt to navigate the treacherous waters created by the controversial views of one of tennis' greatest athletes.

TA was never going to keep everyone happy, but good leadership is not about creating winners and losers, but rather finding a way to achieve outcomes in difficult situations. 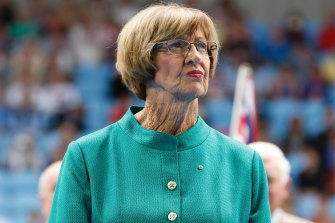 Margaret Court has been a controversial figure due to her comments and opinions.Credit:AP

They have neatly managed to come up with a solution that celebrates Court's incredible sporting achievements while at the same time acknowledging the hurt and distress caused by some of her well-publicised views.

Importantly, the decision doesn't allow Court to become a martyr for her cause. She cannot claim victimhood or persecution. Yes, she may be unpopular in some quarters, but it is difficult to parlay unpopularity into power. Rather, she gets the acknowledgement she wants, and those who wish to celebrate her tennis career now have the opportunity to do so.

Having said all of this, it is one matter to make a decision. It is an entirely different matter to implement it. That it comes after Court took to the newspapers to request that her achievements were acknowledged suggests that there are some awkward moments to come.

While Tennis Australia have made it clear that Court cannot use the celebration of her achievements as a platform to for her views, it will be fascinating to see how that plays out in practice, and whether you can in fact separate her achievements from her opinions, or indeed control what she says.

There is also the matter of how the fans will react. Many will applaud and celebrate, as is their right, but there will also be many who won't, as is their right. Doing anything in a public forum runs the risk of public dissent, especially in a situation involving a figure who has proved so divisive in her personal opinions. Both Court and Tennis Australia will need to understand that they cannot control the reaction of the crowd one way or another, and will need to consider how they manage this and respond.

So while it is appropriate that Tennis Australia honour Court's on-court achievements, it is also necessary that they go above and beyond during the Australian Open to welcome the LGBTIQ community. To celebrate them and their place within the sport. It is not enough to release a strongly worded statement. Action is the key here, and recognising Court's tennis career creates a very real opportunity for tennis to meaningfully engage with those who suffer distress because of her views.

The Australian Open does not, of course, mark the end of the matter. In fact it is just the start.

It is of course just the first of the four slam events that Court won during 1970, so this is a decision that the French Open, Wimbledon and US Open and organisers have coming at them like a freight train.

The precedent has been set this year with each major inviting Rod Laver as a guest and feting him with special events and in each case presenting him with a full replica of the trophy in recognition of the 50th anniversary of his Grand Slam. It was a fitting year-long celebration of a rare and impressive feat.

To not offer the same to Court would be a massive snub. Yet it is one that may well happen, given the fact that Court's nationality is not a major consideration for the other slams. There will be less public pressure to honour her, while there will be plenty of public focus on not only her thoughts on homosexuality and same-sex marriage, but also her historical views that lesbians were ruining tennis and her support of South Africa's apartheid system. The US Open looms as a major battleground, especially with the tournament played at a complex named after Billie Jean King, who has been a fierce critic of Court's opinions.

It will be a fascinating battle to watch as the tennis year rolls along, and tennis fans worldwide who are interested in fairness and equality in sport, including me, will be watching with interest to see how things unfold.

WTA adds events in Prague and Lexington to its provisional calendar