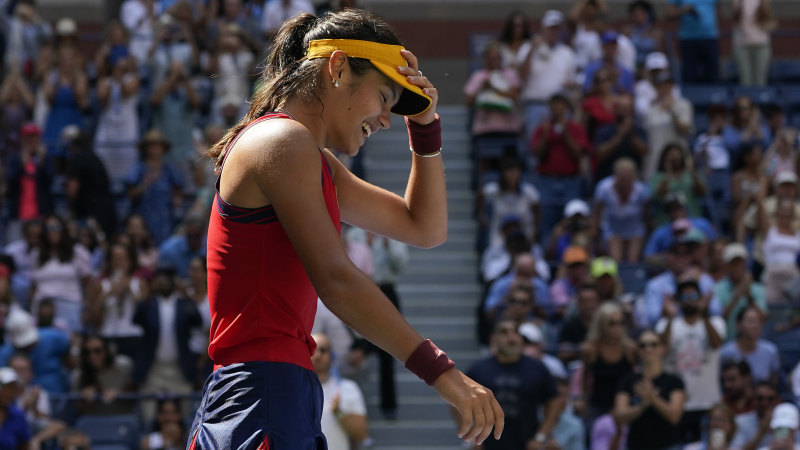 New York: No one is more surprised than Emma Raducanu herself.

The British teenager became the first qualifier to reach the US Open semi-finals by beating Olympic champion Belinda Bencic in straight sets on Wednesday (Thursday AEST).

“I didn’t expect to be here at all,” Raducanu said. “I think my flights were booked at the end of qualifying, so it’s a nice problem to have.”

The upbeat and smiling 18-year-old has made short work of her US Open campaign, winning all 16 sets she has played from qualifying through to the semi-finals, proving lethal at the net and from the baseline.

Raducanu is continuing her remarkable journey through the tournament without her parents in the stands, telling reporters they would need a waiver – which takes a couple of weeks – in order to travel.

Their influence is still felt even from afar, however, as she maintains an on-court composure far beyond her years on the biggest stage. 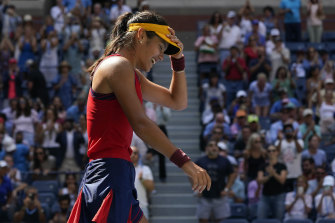 US Open breakout star Emma Raducanu says she had her return flight to the UK booked for the end of qualifying.Credit:AP

“The calmness and the mental strength definitely comes from my upbringing,” Raducanu said.

“My parents have both instilled in me from a very young age to definitely have a positive attitude on court, because, yeah, when I was younger, it was definitely an absolute no-go if I had any sort of bad attitude.”

Drawing comparisons with Swiss Martina Hingis, the youngest player to win a grand slam title, Raducanu made the fourth round of her Wimbledon debut this year to announce herself as another potential star of British tennis.

“We have some great role models to look up to,” said Raducanu, who won her quarter-final against American Shelby Rogers with Virginia Wade, the last British woman to win Wimbledon, in 1977, watching on from the stands. 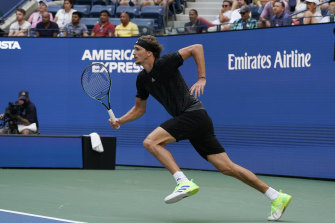 Alexander Zverev is one match away from a second consecutive US Open final.Credit:AP

“Andy (Murray) has quite often spoken to me, and I actually hit with him two times, which was really good for me to see his ball speed and how good he is … all are such great role models and figures for me to follow,” Raducanu said of her compatriot Murray, a three-time grand slam singles champion.

In the first of the day’s men’s quarter-finals fourth seed Alexander Zverev extended his winning streak to 16 matches by easing past South African Lloyd Harris 7-6 (8-6), 6-3, 6-4 and into the last four where the German looms large as a potential roadblock to Novak Djokovic’s bid for a calendar-year grand slam.

The victory leaves Zverev one win away from returning to a second consecutive US Open final and another shot at a first career major title after losing to Dominic Thiem last year.

Zverev will await the winner between top seed Djokovic and Italian Matteo Berrettini, who meet later on Thursday AEST in a rematch of the Wimbledon final. The path to what would be a record 21st major title has become very steep for the history-hunting Serb, who must first get through sixth seed Berrettini with Zverev now waiting in the wings.