Rafael Nadal is on a mission to win as many Grand Slam titles as possible. That is the view of former world No 3 David Ferrer. Nadal finished the 2019 season on top of the world after a memorable year by even his own high standards. After the disappointment of losing convincingly in the Australian Open final to Novak Djokovic, Nadal hit back in impressive fashion.

He reached the semi-final or final in 10 consecutive tournaments, winning in Rome, Roland Garros, Toronto and the US Open.

By winning two Grand Slams, Nadal moved to 19 majors and has never been as close as he currently is to Roger Federer in the all-time list.

The 33-year-old now trails his Swiss rival by just one and injury permitting will be the big favourite to win at least the French Open for the 13th time.

And Ferrer believes not even the rising performances of Stefanos Tsitsipas, Dominic Thiem and Daniil Medvedev can stop Nadal in 2020.

He told Express Sport: “I think his goal is to win as many Grand Slams as possible.

JUST IN: Roger Federer pays tribute to Rafael Nadal after finishing as year-end No 1 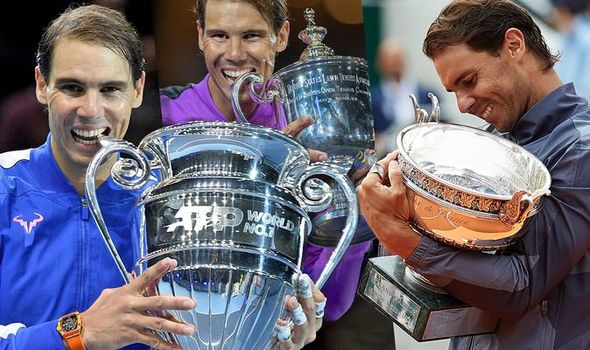 “It is a target for him. He wants to do something like Roger. It is a very good target for him to still keep going. It is more difficult but in this moment he is the No 1 in the world. So he is in a good place.

“Tsitsipas, Thiem, Medvedev are very good players but Rafa for me is the favourite to finish next year as world No 1. He can do it.”

Despite the finish to the year, 2019 did have its low moments for Nadal as he struggled with a knee problem at Indian Wells which led to him seriously considering ending the season early.

But Nadal has never been one to quit and Ferrer hailed his ability to perform on every surface.

“He’s a superhero. He’s unbelievable. Every year Rafa surprises me,” he said. 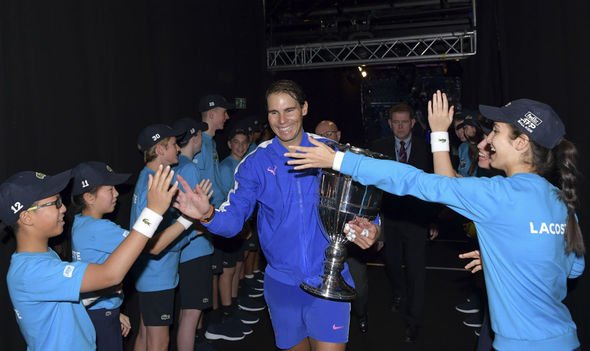 “Everything he is improving his game. His mentality is different to other players I’ve seen in my life.

“He’s won on every surface. Of course clay courts are his favourite but when you finish as No 1 in the world it is because you’d played all year really good, on all surfaces, not only clay courts. Rafa, Roger and Novak are special tennis players.”

Back in May, Nadal was among several ATP players past and present who said goodbye to Ferrer as he retired from the sport after 19 years on the tour at the Madrid Open.

The Spaniard is arguably the best player never to win a Grand Slam but he has no regrets and is now finding comfort in developing the next tennis superstar at his academy in Valencia, being the tournament director at the Barcelona Open and spending more time with his family.

Rafael Nadal ‘will not stop’ after ‘unbelievable’ 2019 season – Carlos Moya

He added: “Being retired is very different. There are a lot of things to do with the family. I have a one-year-old son.

“My priorities are my wife and my son and I have time to enjoy with them because when I was a tennis pro I travelled a lot and had no time for them [so] it is different, another stage of life.

“[Now] I am more patient, I have more love for them, I have other motivations and goals in my life. It is nice for me because it is different work and it is still with tennis.

“I am improving myself and doing something I’ve never done before. And I hope to be able to do a really good [job]. It is a good motivation to still be involved in tennis.”

David Ferrer was speaking at the Champions Tennis tournament at the Royal Albert Hall.

'I was fearing my body shutting down': Dimitrov opens up on Covid-19