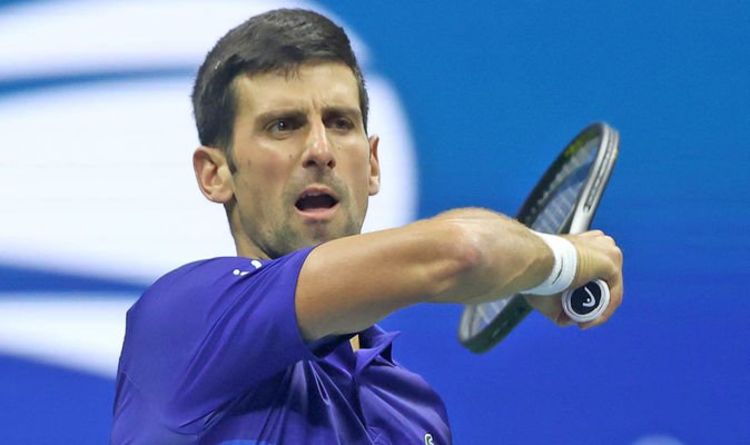 Tennis grand slams: Who is the greatest of all time?

Novak Djokovic has insisted tennis must learn to cope without Roger Federer and Rafael Nadal. Both men are absent from the US Open this year. And that works in the Serb’s favour as he hunts a record 21st Grand Slam triumph.

Djokovic has been in fine form at the US Open so far, winning matches against Holger Rune and Tallon Griekspoor.

He’ll go up against Kei Nishikori next up, with the Serb expected to prevail to the fourth round at Flushing Meadows.

And, speaking before that game, Djokovic addressed the absences of Federer and Nadal.

He said: “Of course, the absence of Serena, Rafa, Roger, Dominic, of course, Venus, is affecting, no doubt about it.

“But we are here. I feel also the players who are here, along with me on the men’s side, deserve the credit. They’re the next generation.

“We need to do more promotion of their own stories, their own brands.

“I know that people like to see the three of us on the men’s side, of course Serena, Williams sisters, Naomi, probably some big stars on the women’s side.”

On the rivalry itself, Djokovic said: “We do complement each other.

“I think the rivalry between the Big Three, so to say, it’s phenomenal for our sport.

“So the more traction, the more conversation there is around the three of us, the GOAT discussion, et cetera, the better in general for our sport.”

With Nishikori up next tonight, Djokovic has also hailed his opponent.

“He’s one of the quickest and most talented players that I’ve seen in my lifetime,” Djokovic said of his opponent.

“It’s important for me to serve well and try to take off the pace a little bit because he likes the pace. He likes to hit the ball early, protect the line.

“We had some battles, particularly on hardcourts.

“He’s going to try and make me run and make my life difficult but I’ll make my shots as well.”

And Nishikori has returned the favour, acknowledging Djokovic’s achievements but vowing to do his best to stop his rival from emerging victorious.

“I think it was one of my best matches. Because of that, I think it’s a little better feeling that I have playing here,” he said.

“Even though he’s the best player, I have good memories here playing the US Open and beating him before here.

And Nishikori also revealed he was excited about the challenge that now awaits him.

“Obviously I love the challenge,” he said.

“Now he’s one of the best on the tennis tour. It’s not someone I love to play all the time because obviously he’s the toughest opponent, one or two.

“I’d rather have someone ranked lower. I always love the challenge.

“Even though I have a bad record, I always try to be positive.