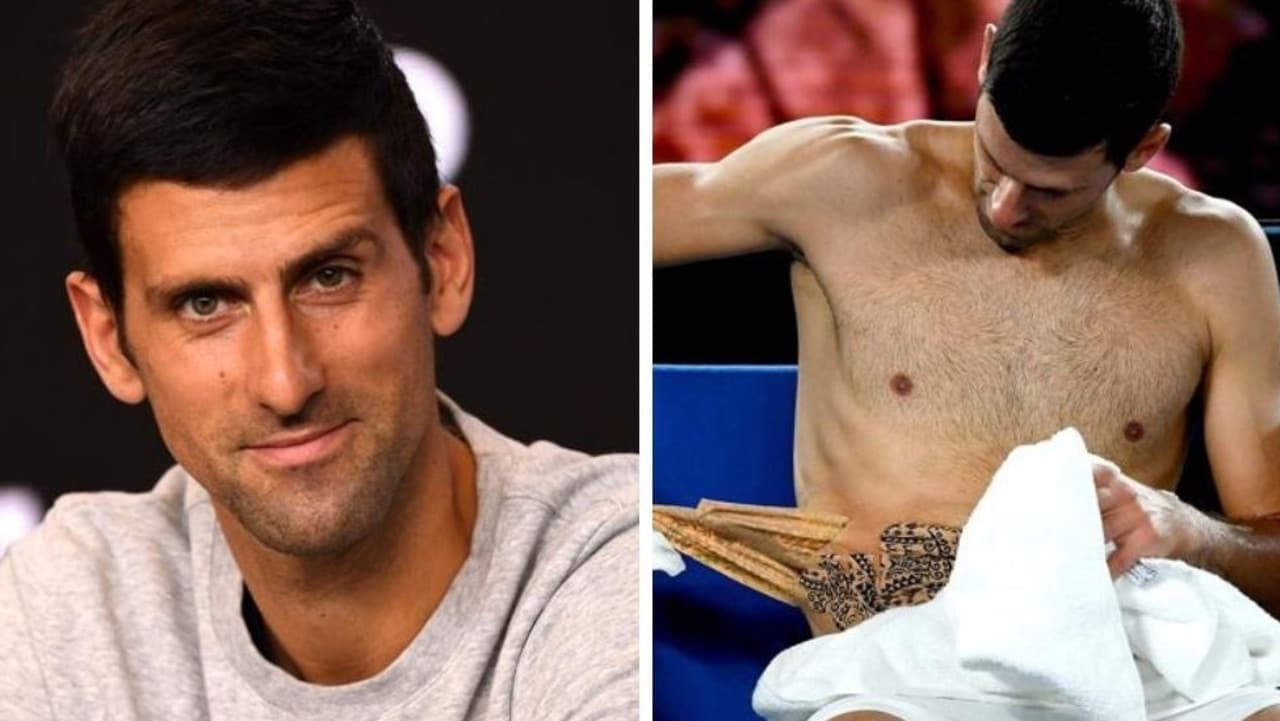 Novak Djokovic was in a talkative mood after winning his ninth Australian Open title, opening up on a range of issues which have dominated discussion around his charge towards the finish line in Melbourne.

He achieved that remarkable feat when it seemed like so many — not including his hardcore “Nolefam” fan base — were against him, for several reasons.

There were barbs thrown at his apparent entitlement in quarantine and question marks over the legitimacy of an injury. But Djokovic was happy to reveal all about his triumph at what he called “emotionally one of the hardest tournaments” he’s ever played.

Speaking after his third round win over Taylor Fritz, Djokovic revealed he was suffering from an abdominal “muscle tear” — yet showed no signs of discomfort as he overcame the American in five sets.

He remained coy after beating Milos Raonic in round four, declining to offer details but saying his injury was so bad he would have pulled out of the tournament if it wasn’t a grand slam.

The world No. 1 has a reputation for faking injuries when losing and even Nadal suggested there was no way his ailment was as bad as the 33-year-old was making out, because it would be impossible to win with such a problem.

But Djokovic and miracles go hand-in-hand at Melbourne Park and he brushed aside his injury woes — which his camp said improved, but didn’t completely heal as the tournament wore on — to win another title.

Speaking after his victory, a candid Djokovic was happy to spill all about his abs, shutting down sceptics who accused him of telling porkies.

“It was a bit unfair at times but it’s not the first nor the last time,” he said in his post-match press conference of the way he was treated by sections of the media, suggesting a documentary to be released next year will show the lengths he went to behind the scenes to cope with the injury.

Earlier, Djokovic added: “I got injured in the third round. It was rollercoaster ride if I can define it in one word. I think it makes even sweeter for me.

“I wanted to keep things quiet and clear for me in terms of talking about the injury or any other stuff. Just keeping it to tennis.

“It’s a muscle tear. It was a muscle tear at that point. I don’t think I’ve experienced that kind of a snap that I had in the third round.

“I went to an MRI. The MRI has shown a tear. People questioned that. I understand they question my injury, question whether there is a tear. There is. I can get the doctors and physios to confirm that.

“For me it was a huge obstacle and challenge. I haven’t practised in the days between the matches.

“Out of 14 waking hours, I spent 10 hours on the (physio) table and doing everything I possibly can. It worked.

“I owe great gratitude to my physio putting in a lot of hours and knowledge and know how. I guess we’re all different. I have maybe a great ability to heal. I don’t know.

“I just managed somehow with pills and painkillers and stuff.

“It’s not healed up. I’m going to go and do another MRI tomorrow before I travel back. But I am definitely going to take some time off. I don’t know how long it will take.”

Djokovic was always taped up from midway through the tournament.Source:AFP

Djokovic already painted a target on his back by completely ignoring social distancing measures during his ill-fated Adria exhibition tour last year, which resulted in multiple players — including himself and his wife — contracting COVID-19.

Nick Kyrgios led the chorus of criticism as the shameless Serbian had no issues partying and dancing with his shirt off in nightclubs during the event held around the Balkans, before it was ultimately cut short.

It’s why there was furious backlash when a letter he sent to Australian tennis bosses suggesting steps that could be taken to make life easier for players in quarantine was leaked.

Djokovic was quarantining in Adelaide, where he was allowed out for five hours a day to train, but 72 of his colleagues were forced to endure a hard 14-day lockdown in Melbourne because they were deemed close contacts of passengers who tested positive to coronavirus on three charter flights Down Under.

Addressing the criticism that came his way after soaking up his ninth Australian Open success, Djokovic said: “Emotionally this was one of hardest tournaments I had, to be honest, with quarantine and a lot of things happening in the media.

“The letter that I wrote, ideas and recommendations that I got from players was misinterpreted as my request and list of demands. Then the next thing you know within a couple of days I’m persona non grata in this country.”

But the attacks on his character didn’t shake Djokovic from his ultimate goal.

NO REGRET OVER NEXT GEN DISMISSAL

Before the final, Djokovic dismissed the threat of rising stars forming part of the so-called Generation Next, insisting he and his senior colleagues — like Nadal and Federer — weren’t willing to surrender their status as tennis’ top dogs just yet.

“There’s been a lot of talk about the new generation coming and taking over the three of us, but realistically that isn’t happening still,” Djokovic told Eurosport.

“We can talk about it all day, but with all my respect to the other guys, they still have a lot of work to do.”

The king of Melbourne Park wasn’t backing down from his firm stance after dismantling 25-year-old Medvedev, who lost his second grand slam final after going down to Nadal in the 2019 US Open decider.

“It was a risky statement before the match,” he said. “Of course, I meant no disrespect.

“But I think I deserved, over the years in my position, to say something confident about myself and my game and my record in the finals.”

Djokovic’s coach Goran Ivanisevic backed up his pupil’s assertion the younger brigade still has a long way to co before catching up to the Big Three.

“They think they know too much, young guys,” he said, adding the top players are never afraid of trying new things to improve.