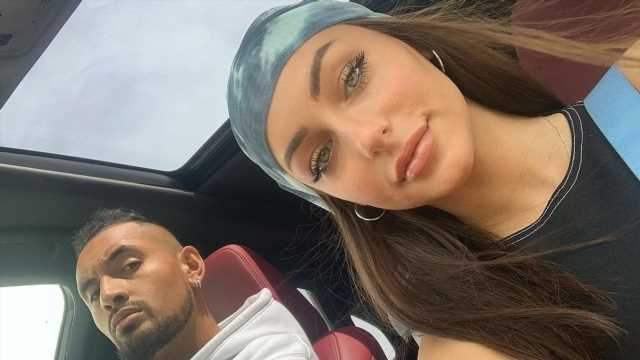 Kyrgios appeared to delete all but one image of Passari on his Instagram after she posted a cryptic message about “cheaters” this week.

Passari didn’t mention any names or reference the Aussie tennis star in her post, which was uploaded to her Instagram story.

“Cheaters always want you to be loyal while they’re being unfaithful,” it read.

Passari added the caption “It keeps getting better y’all”, with several upside down smiling emojis.

Passari, who Kyrgios started dating in the middle of last year as he returned to his home city of Canberra during the pandemic, wasn’t in Melbourne as the world number 47 began his Australian Open campaign on Monday night with a 6-4 6-4 6-4 win.

But she was well and truly in the Aussie’s thoughts as he scribbled a personal message to her on the camera lens as he left the court.

“Miss u Chizzel,” he wrote, with a smiley face.

Nick Kyrgios writes a message to his girlfriend Chiara Passari.Source:Instagram

The couple are all smiles.Source:Instagram

Kyrgios dispelled any doubt about their relationship status when he referred to his “amazing girlfriend” when asked a question about his perspective on tennis during his post-match press conference.

“I feel old. This sport has stressed me out. I feel like an old soul. At the end of the day it’s just a tennis match. Obviously I’m going to get angry as I’m playing because I’m a competitor, I always want to win. But I don’t beat myself up over losses,” he said.

“I’m extremely lucky to even be in my position. I’m healthy. I’ve got great friends, great family, an amazing girlfriend back home — I’m blessed. Look at me, I’m a wise man now.”

And to complete his night, he FaceTimed with Passari back in his hotel room — and shared a screenshot of them talking.

“Chiara Passari my recovery for the night,” Kyrgios wrote.

Before Passari, Kyrgios was dating Russian tennis player Anna Kalinskaya. But in May last year, the couple — who had been spotted together at an NBA game and watching each other’s tennis matches — confirmed they were no longer in a relationship.

“We just went our separate ways,” Kyrgios told fans during a video game live stream. “Unfortunately things didn’t work out. We had some fun memories.”