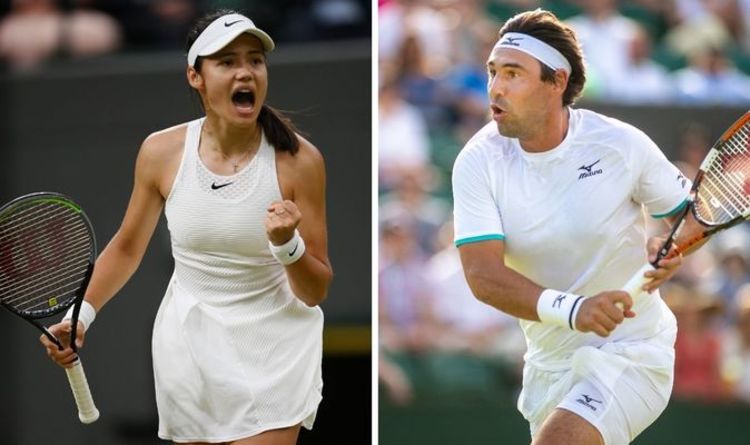 Emma Raducanu has been heralded as tennis’ next big thing off the back of her historic run to the US Open final, after coming through qualifying. While it’s the 18-year-old’s exploits in Flushing Meadows that have earned her international recognition, former world No 8 Marcos Baghdatis says he knew she was the real deal after her breakthrough Wimbledon run. The Brit made the round of 16 at her debut Grand Slam as a wildcard, with Baghdatis saying “a star was born” at the All England Club.

Raducanu has been the story of this year’s US Open, a tournament which could also see Novak Djokovic become the first man in 52 years to win the Calendar Grand Slam.

The Bromley teenager came through qualifying to make it to the main draw of a Grand Slam for just the second time in her young career, and is now through to the final having remarkably not dropped a set through nine matches.

Her historic run makes her the first player ever to make a Major final as a qualifier, and Raducanu is also the first British woman to reach a final of a Slam since Virginia Wade 44 years ago.

While her exploits in Flushing Meadows have made her an overnight household name in the tennis world, the 18-year-old had her first breakthrough fairytale run at Wimbledon less than three months ago.

JUST IN: How to watch Emma Raducanu’s US Open final for FREE in the UK

Raducanu received a last-minute wildcard into the grass-court Slam, and stormed to the second week before retiring her fourth-round match with breathing difficulties.

Though her US Open run has been even more astonishing, one former top-ten player says he knew the teenager was a star when he saw her play at Wimbledon.

“I heard about her, but when I saw her play at Wimbledon, it was like a star was born,” Baghdatis told Sky Sports.

The former world No 8 will be taking to the court in the Royal Albert Hall later this year for the Champions Tennis event, with Raducanu set to make a guest appearance too.

The now-retired player continued: “It’s just an incredible story and tennis-wise, there is just nothing to say. She’s doing everything very well and at this age, she still has so much space for improvement in her game but the most amazing thing was her personality, her smile, and the way she enjoyed the whole tournament.”

The Canadian-born teenager was ranked world No 338 before Wimbledon, and recently made a career-high of No 150 after reaching the WTA 125 final in Chicago just three weeks ago.

Her run to the US Open final means she will now be ranked world No 32, and a title would take her to No 24.

Though just 18-years-old, Raducanu has already served as an inspiration to the likes of 36-year-old Baghdatis.

“She was even an inspiration to me watching her. It’s so nice to see somebody love the sport, smile, and play. Be free on the court.

“It’s been a long time since we didn’t see a person like that on the court.”

Raducanu will take on fellow teenager Leylah Annie Fernandez in the final on Saturday night.

Canadian Fernandez turned 19 on Monday and has had her own impressive run to the final, beating the likes of Naomi Osaka, Angie Kerber, Elina Svitolina and Aryna Sabalenka en route.