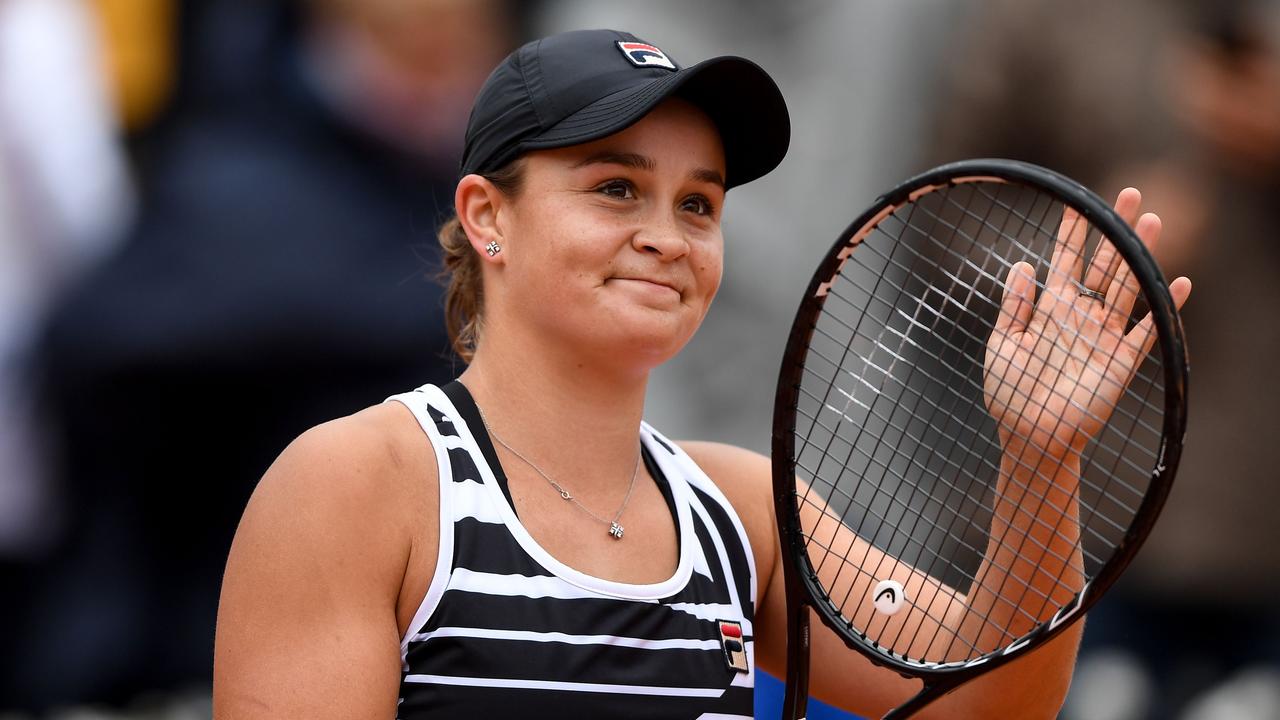 Ash Barty will keep Naomi Osaka at bay in their battle for the No. 1 ranking on the WTA Tour with a semi-final appearance at the French Open.

The Aussie star has Osaka breathing down her neck as they head into their first round matches at Roland Garros., beginning Sunday night.

The 25-year-old returns to the French clay for the first time since her greatest triumph in 2019 and will face American Bernarda Pera in the first round.

She is defending 2000 ranking points at the event and an early loss would open the door right open for Osaka to return to the top of the list.

The rankings breakdown shows Barty is guaranteed to keep her No. 1 crown if she can make the semi-finals — a rankings score of 720, meaning she would only lose 1280 points from her 10,175 total.

Osaka, who has struggled at Roland Garros in recent years, is only defending 130 ranking points as a result of her third round exit last year.

It means she has potential for a 1870-point boost if she wins the tournament, potentially pushing her to a total rankings score of 9331.

Osaka has to at least make the final to challenge Barty.

Barty has enjoyed a streak of 72 consecutive weeks as the world No. 1, despite skipping the 2020 tour as a result of the COVID-19 pandemic.

She has won three titles this year and reached the Madrid final, but an arm injury at the Italian Open forced her out of the quarter-finals and cast doubt over her fitness in Paris.

“I think coming back to the site here at Roland Garros is obviously pretty special, pretty cool,” said Barty.

Ash Barty is back for the first time in 48 months.Source:Reuters

“A lot of it I also don’t remember and feels like it was such a long time ago. It’s certainly a clean slate for us this week.”

Osaka, meanwhile, was knocked out early in both Madrid and Rome. Her best performance at Roland Garros in four attempts is the third round.

Her preparations have been overshadowed by her decision to boycott all press conferences at the tournament, fearing their effects on her mental health.

The 23-year-old’s gesture was lambasted as a “phenomenal mistake” by French tennis chief Gilles Moretton.

Nadal and Barty give Osaka a reality check

Some of the biggest names in tennis have casually given the World No. 2 a reality check over her stunning decision to snub reporters for the entire tournament.

Both stars delivered their messages as delicately as possible, but the blunt statements show Osaka is now completely offside with the rest of the locker room.

Rafael Nadal said on Saturday (AEST) that without the media “we will not be the athletes that we are today” as Osaka became increasingly isolated over her decision to boycott all French Open press commitments.

The highest-earning female athlete on the planet caused a stir at Roland Garros by announcing that she will refuse to carry out any media activity at the tournament, claiming she fears the effect of them on her and fellow players’ mental health.

The four-time major winner believes the traditional post-match inquests are akin to “kicking people when they are down”.

Osaka on Friday suffered a fierce backlash to her public stand — and now the biggest names in tennis have joined the crowd.

Osaka risks fines of up to $20,000 for skipping news conferences at the French Open which starts on Sunday.

Ashleigh Barty is back at the scene of her greatest triumph.Source:Getty Images

The 23-year-old’s closest rival and 2019 French Open winner Barty said carrying out media duties is part and parcel of the job.

“We know what we sign up for as professional tennis players,” the 25-year-old Australian said.

“I can’t really comment on what Naomi is feeling or her decisions she makes. At times press conferences are hard of course but it’s also not something that bothers me.

“I’ve never had problems answering questions. It’s not something that’s ever fazed me too much.

“And it certainly doesn’t keep me up at night what I say and hear or what you guys ask me.”

Nadal, the 13-time French Open champion, said that even though he respected Osaka’s decision, media coverage has driven the success of the sport.

“I understand her, but for me without the press, without the people who are writing the news and achievements that we are having around the world probably we will not be the athletes that we are today,” said Nadal, a 20-time major winner.

“We won’t have the recognition that we have around the world, and we will not be that popular.”