Nick Kyrgios wants to be part of Australia's Olympic team in Tokyo four years after pulling out of the Rio team amid controversy.

"One hundred per cent (I want to go to the Olympics)," Kyrgios said on Tuesday night, after winning his first round match at the Australian Open in straight sets.  "I wanted to play just as much the last time the Olympics were around. 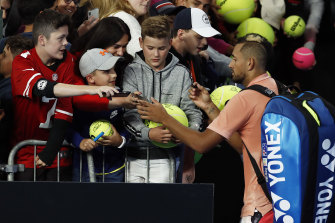 Nick Kyrgios signs autographs for fans after winning his first round match against Lorenzo Sonego/Credit:Getty Images

"Just with everything going on, walking out there I was a lot more nervous than I have been in previous matches. Australian Open, I usually feel pretty comfortable," he said after his straight sets win over Lorenzo Sonego 6-2, 7-6, 7-6.

"I was definitely really nervous walking out there, but the crowd was unbelievable. I got comfortable quite early in the match. I played an unbelievable first set, which helped. I thought the pressure kind of eased off after I won that first set. He didn't go away.

"I'm just playing (for) a lot more than myself. I've said it before, so … there's not necessarily added pressure. I feel like I'm playing for a lot of people."

He was also playing for his good friend Alex de Minaur who was forced to withdraw from the Open with an injury.

"I'm still heartbroken about Demon … this is for you little fella."