It was 2.45am when Great Britain brought up the first of their two match points on the opening ‘day’ of the ATP Cup, which had spilled into the Australian weekend.

Jamie Murray delivered a pinpoint serve at 9-7 in the sudden death ‘champions’ tiebreak, only to see it fly back past him into the corner off the majestic backhand of Grigor Dimitrov. Two minutes later it was all over, Tim Henman’s captaincy debut ending in an overall 2-1 defeat.

The 33-year-old Scot could hardly contain his frustration, the ridiculously late hour helping level out the match with barely 150 insomniacs left to celebrate or commiserate among themselves. 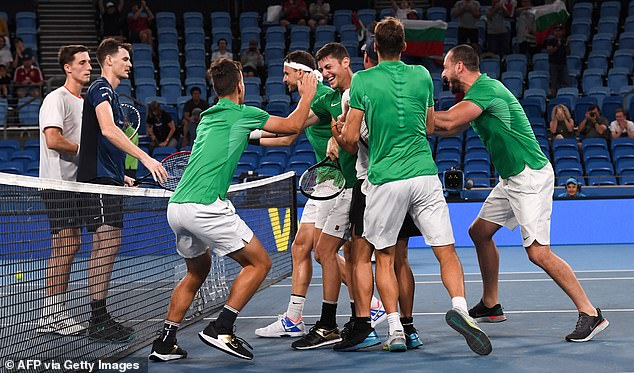 ‘It’s obviously just annoying isn’t it, to play at that time, for everyone involved in the tournament,’ said Murray, who in the company of first-time partner Joe Salisbury had gone down to a 7-6, 6-7, 11-9 defeat that began at 12.45am. Cam Norrie won his earlier singles while there was defeat for No 1 Dan Evans at the hands of the outstanding Dimitrov.

‘It’s a shame because you start the match with singles and there’s five or six thousand people there but by the time you play there are just a few hundred,’ said Murray. ‘That’s not really what the event should be about. But we had enough chances to win the first set and the first tiebreak and didn’t.’

Late finishes are nothing new in Australia, but usually you have to wait until the Australian Open, where Jo Konta was beaten in the second round at 3.30am last year. 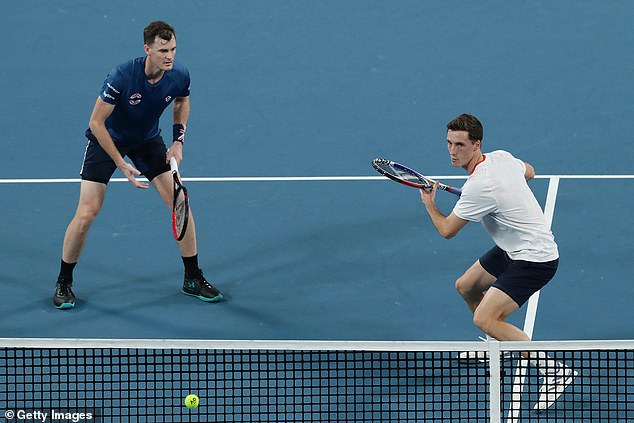 Murray and Salisbury are GB’s two highest-ranked doubles players (Neal Skupski could not be picked under the tournament rules) and the fact it was their first outing together occasionally showed in their positioning.

They paid a heavy cost for not breaking little-known Alexandar Lazarov when they had opportunities in the first set.

Henman remained calm as he sat in the new ‘Player Zone’ in the corner of the court. He offered measured support and advice, with animated GB team-mates seated behind him.

Henman said: ‘All these sports at the highest level have very fine margins. It came down to one or two points at the end. Dimitrov hits a backhand winner that can go anywhere, but he deserved to come out on top because he played brilliantly. It’s a tough one to take right now.’

Henman’s team almost certainly have to win their remaining two matches, against Belgium on Sunday, then Moldova, to have a chance of progressing. 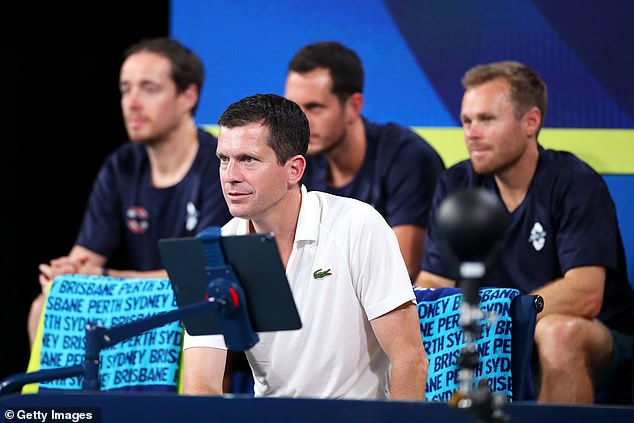 Henman’s team almost certainly have to win their remaining two matches, against Belgium on Sunday, then Moldova, to have a chance of progressing in the competition

The severe delays had begun nearly 15 hours earlier, when the first singles win for Belgium over Moldova in the same group took three hours, 10 minutes to complete. That was compounded by a power failure during the doubles rubber, in which the deciding tiebreaker took half an hour.

It meant Norrie did not begin until nearly two hours after the scheduled 5.30pm start. Thousands of fans were forced to loiter outside a largely empty stadium, adding insult to the injury they may have felt as many bought tickets for this match expecting to see Andy Murray face Roger Federer, before Switzerland were forced to drop out due to the latter’s withdrawal.

With conditions slow, Norrie was made to work hard by world No 423 Dimitar Kuzmonov before coming through 6-2, 3-6, 6-2. The thought occurred that had Kyle Edmund been available — he could not be selected due to his low ranking in November — he would have made easier work of it.

In a higher calibre encounter, Evans started brightly against US Open semi-finalist Dimitrov but was edged out of the second set before the classy Bulgarian turned on the quality in the third to win 2-6, 6-4, 6-1.