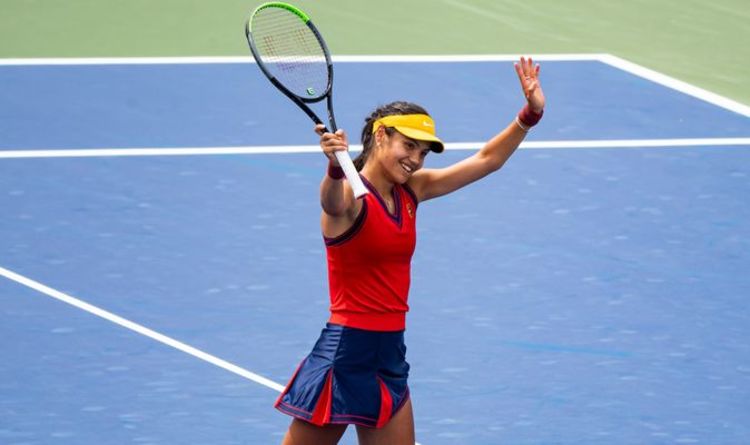 Emma Raducanu reacts to messages from the royal family

Emma Raducanu has packed her schedule for the rest of 2021 following a surprise early exit in Indian Wells. The 18-year-old made history a month ago when she became the first qualifier to win a Grand Slam title, coming through ten matches without dropping a set on her way to the US Open trophy. After an unsuccessful return to the match court in the Californian desert, she is set to play three tournaments and two exhibitions before the end of the year.

Raducanu became an overnight household name in the sporting world when she achieved the seemingly-impossible, failing to drop a set in three qualifying rounds and seven main-draw matches as she became the first qualifier to win a Major and the first woman to lift the title on her second appearance at Grand Slam level.

Having started the US Open ranked at a then-career high of world No 150, she now sits at No 22 and has gone from little-known underdog to the woman to beat.

The Bromley local made her highly-anticipated return to the match court in Indian Wells last Friday but was unable to notch an 11th successive win, looking flat in the slow conditions as world No 100 Aliaksandra Sasnovich defeated her 6-2 6-4.

While it was a disappointing first match since her historic US Open triumph, Raducanu will have plenty of opportunities to get more wins under her belt as she adjusts to life on the pro tour, after signing herself up for five more tournaments this year.

JUST IN: Federer and Nadal verdicts on underarm serve as Murray defends himself

Express Sport takes a look at Raducanu’s current schedule for the rest of 2021.

The Kremlin Cup was the first tournament Raducanu signed up for after winning the US Open.

The WTA 500 event in Moscow has attracted a strong field of players this year meaning the world No 21 will have her work cut out for her with the likes of Garbine Muguruza, recent gold medallist Belinda Bencic, and one of Raducanu’s idols Simona Halep all in the draw.

The ATP 500 event at the Kremlin Cup is also running simultaneously, with Raducanu’s fellow US Open champion Daniil Medvedev set to play alongside other top Russian players including Andrey Rublev and Karen Khachanov.

Raducanu has already shared her excitement to play in Romania’s new WTA 250 event, as her father hails from the country and her grandmother still lives there.

Simona Halep, Elise Mertens and Anett Kontaveit are among the players set to join the British teenager in Cluj-Napoca, where Raducanu has already said she is keen to get her grandmother down to watch her from the crowd.

The WTA 250 event has proven popular with young stars in the past, with fellow teenage sensation Coco Gauff’s first title coming at the tournament back in 2019.

The Linz tournament is the final tour-level event in Raducanu’s schedule for 2021, though she has also signed herself up for two exhibitions.

However, following her loss in Indian Wells, the 18-year-old hinted that she may not play all the tournaments she has entered, saying of her European hard-court schedule: “Yeah, we’ll see what happens when I get back. I’ll probably discuss with a few people on my team and see what’s right for me, what the next decision is going to be.”

Before Raducanu became a Grand Slam champion, she signed up to appear at the ATP Champions event which sees retired male players face off in London’s Royal Albert Hall.

The teenager from Bromley will be playing an exhibition match at the Champions Tour event that attracts legends including former British No 1s Greg Rusedski and Tim Henman.

The US Open champion was announced as playing in the 13th edition of the Abu Dhabi exhibition on Monday.

“I’ve never been to Abu Dhabi and can’t wait to play in the championship. I know the UAE is celebrating its 50th anniversary at the beginning of December, so I’m sure it’s going to be amazing there. I’m excited to experience everything the country has to offer, both at the event and culturally,” Raducanu said.

The exhibition has traditionally seen six ATP players battle it out for the title, attracting the likes of Novak Djokovic and Rafael Nadal to play, while two WTA players have previously faced off in a single match to win, with Maria Sharapova defeating Ajla Tomljanovic in 2019 and Venus Williams defeating sister Serena in 2018.

Serena Williams also played her first match after giving birth to daughter Olympic during the first women’s exhibition event at the tournament back in 2017, losing to Jelena Ostapenko, the French Open champion of that year.