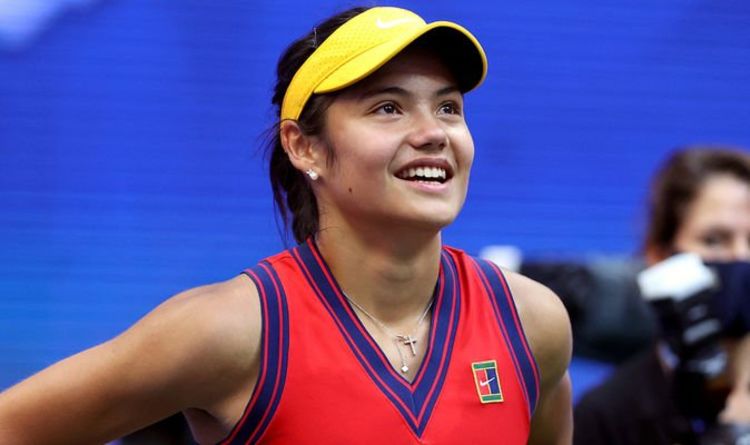 Emma Raducanu stunned the tennis world, and her father, on Saturday night as she defied the odds to win the US Open in just her second Grand Slam appearance. The 18-year-old didn’t drop a single set on her way to winning the title in New York.

Raducanu thrust her way into the limelight at Wimbledon and then secured her place in history by seeing off Canada’s Leylah Fernandez 6-4, 6-3 in the showpiece event at Flushing Meadows.

Her only other Grand Slam appearance had come at this year’s Wimbledon, but the teenager displayed the experience of a player well beyond her years on her way to Saturday’s success.

Raducanu was ranked 150th in the world ahead of the US Open and was forced to play three qualifying matches before the tournament even began.

She cruised through those encounters without being seriously tested and then stormed to the title to write her name in tennis history.

And following the triumph, Raducanu admits her ‘tough to please’ dad had a brilliant message for her.

“You’re even better than your dad thought,” gushed her proud father Ian, who watched the match back home in England.

Ian was unable to travel to the US to witness the final live, and neither was mum Renee, due to the country’s COVID-19 restrictions.

Raducanu’s maiden title has launched her straight into the record books as she became the first qualifier in history – male or female – to win a Grand Slam title.

She is the first British woman to win a Grand Slam since 1977, when Virginia Wade won Wimbledon. Wade was fittingly in New York to witness Raducanu’s glory.

And the new tennis sensation is the youngest Grand Slam champion since Maria Sharapova won Wimbledon in 2004 as a 17-year-old.

“To have them say they are proud and happy – it just means absolutely everything,” Raducanu said of her parents.

“My dad is definitely very tough to please but I managed to. I wouldn’t be here without them.

“We don’t really talk so much about tennis but they just really want to know how I am in these moments.”

Raducanu, from Bromley in south east London, will now fly home to celebrate her success with her parents.

Saturday’s victory will see her ranking skyrocket and she will leave the days of having to qualify for major tournaments well and truly behind her.

Raducanu is likely to enter a number of WTA events before turning her attentions to next year’s Australian Open – the next Grand Slam on the calendar.