Australian wheelchair tennis star Dylan Alcott has secured the golden grand slam, completing the remarkable achievement at the US Open barely a week after defending his Paralympics gold medal in Tokyo.

Alcott now has 15 major titles, winning his third US Open title with a straight-sets win over 18-year-old Dutchman Niels Vink, 7-5, 6-2. 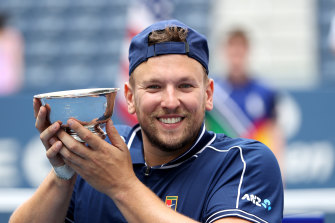 Dylan Alcott celebrates after defeating Niels Vink at the US Open to complete a golden grand slam.Credit:Getty Images

Alcott dug deep to claim the opening set and steadily wore down his opponent in the second set, putting his hands on his first US Open quad wheelchair singles trophy in three years.

But it was his achievement to claim the Australian Open, Roland Garros, Wimbledon and US titles in the same year that was immediately front of mind.

The slam was secured about 30 minutes before world No.1 Novak Djokovic was due to hit centre court for his history-making pursuit of the first men’s grand slam since 1969.

“I just can’t believe I just won the golden slam,” Alcott said on court, immediately reflecting on his journey after he found peace and purpose with wheelchair basketball and then wheelchair tennis. 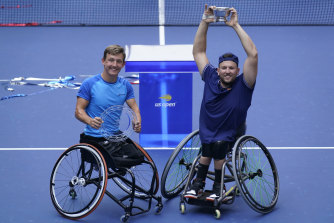 Alcott and Vink pose for a picture after the final.Credit:AP

“I used to hate myself so much, I hated my disability, I didn’t want to be here anymore, [but] I found tennis and it changed and saved my life.

“I’ve now become the only male ever in any form of tennis I think to win the golden slam, which is pretty cool.

“To everybody at home, I love you. Hopefully this puts a smile on your face. Better times are around the horizon.

“To everybody in New York, I feel honoured and privileged to be out here on this court.

“I’ll going to be upfront, I don’t know whether I’ll be back here, so I really appreciate everything.