Alex Bolt is desperate for more Australian Open success this summer after thrusting himself into the spotlight at his home grand slam earlier this year. 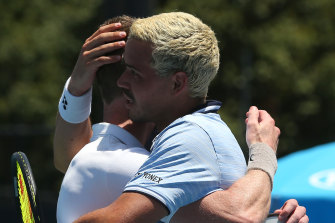 Alex Bolt is congratulated by Blake Mott after their clash on MondayCredit:Getty

Bolt rode a wave of momentum and local support before eventually losing in the third round to German star Alexander Zverev.

One avenue back to the big stage was almost slammed shut at Melbourne Park on Monday, when Bolt appeared headed for a first-round exit in the wildcard play-off tournament. The world No.160 trailed two sets to one when his opponent, in-form Blake Mott, tripped and hurt his wrist, leading to an injury-forced retirement. An emotional Bolt felt for his friend, with whom he shares a coach in Peter Luczak.

But the 26-year-old was relieved to get through to the quarter-finals and hoped the play-off tournament was a springboard to bigger things. He faces fellow South Australian Luke Saville today for a spot in the last four. Both men are three wins away from gaining wildcard entries.

‘‘This is always the best time of year coming up, the Aussie summer, so I’m always looking forward to it,’’ Bolt said. ‘‘I’m always confident with the way I’m playing.

‘‘I was playing some good tennis at the start of last year and hopefully I can replicate that again this year. Not a lot [has changed]. I just keep on keeping on, focusing day by day and trying to do the right things day in, day out.’’

Bolt has been hard at work with Luczak, the Polish-born Aussie who twice reached the Australian Open third round.

‘‘I’m working more so on my return games and making a lot more balls in the court, trying to accumulate as much pressure as possible,’’ Bolt said.