Australia's Ashleigh Barty has increased her lead as women's world No.1 in the latest rankings released by the WTA Tour following her round of 16 exit at Wimbledon.

Simona Halep, who won her first title at the All-England club, has moved from seventh to fourth and her beaten opponent Serena Williams improved one place to No.9. 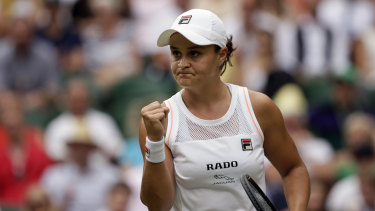 Australia’s Ashleigh Barty has mainted her spot atop the WTA rankings.Credit:AP

But Barty's best ever result at the grasscourt championship, along with a first-round knockout by Barty's predecessor in top spot Naomi Osaka, increased the Australian's lead to 348 points over the Japanese star.

Williams' ranking is her best since returning to the Tour last season after having a baby, while 2018 Wimbledon champion Angelique Kerber suffered the biggest drop of the leading players, slipping eight spots to No.13 after her upset second-round exit at the All England Club this year.

Coco Gauff's magical run from a wildcard entry in qualifying all the way to the fourth round at the All England Club allowed her to move into the WTA's top 150 for the first time.

The 15-year-old American rose 172 places to world No.141 from her world No.313 ranking before the tournament.

Gauff was the youngest player to ever qualify for the main draw at Wimbledon, then beat five-time champion Venus Williams on the way to reaching the fourth round, where she lost to Halep.

Meanwhile, after Halep became her country's first Wimbledon champion, Romania's presidency and the Orthodox Church awarded here their highest distinctions on Monday while hundreds of fans cheered her arrival back home.

"I did the best I could and that's why I managed to win," a beaming Halep told reporters at Bucharest international airport, clutching her trophy and flowers as fans shouted: "Bravo, Simona!"

"I've been staying focused on my tactics … Serena is the best player of all-time."

The presidency awarded her the Star of Romania while the church gave her the Patriarchal Cross.

"I always make the sign of the cross and believe in God because nothing can be done without the help of God," Halep said last year after winning in Paris.