Organisers have fixed a leak in the roof of Rod Laver Arena which required constant attention on the opening night of play at the Australian Open.

Melbourne Park was hit hard by hours of torrential rain on Monday afternoon and while play was not suspended on Rod Laver Arena for Ash Barty’s win against Lesia Tsurenko or Novak Djokovic’s four set result against Jan-Lennard Struff, a leak required constant attention at one end of centre court. 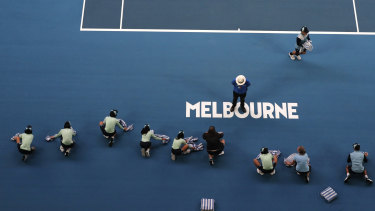 Rod Laver Arena had a leak in its roof on Monday night.Credit:AP

A Tennis Australia source said tournament organisers are confident the issue will not rear its head again, given the amount of rain which was required to trigger the leak.

The Rod Laver Arena roof has not leaked before and a TA spokesperson said the issue had been raised and susbequently fixed in time for forecast rain on Tuesday and Wednesday.

"During the heavy rain on Monday night there was a small leak in the Rod Laver Arena roof," the spokesperson said.

"This has since been repaired." 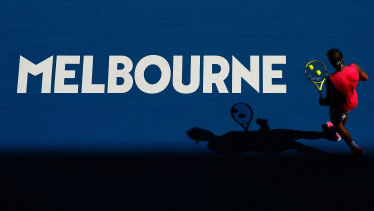 The roof at Rod Laver Arena required attention on Tuesday.Credit:AAP

Perfect conditions for tennis on Tuesday allowed the tournament to clear the backlog of first-round matches which were called off on Monday, when Melbourne Park copped the brunt of the rain which hit the Victorian capital.

There is a strong chance of rain on Wednesday night and morning showers predicted for Thursday morning but not to the same extent as Monday's downpour.