World No.1 Ashleigh Barty is treating her return to Roland Garros as a “clean slate” and doesn’t consider herself a defending champion for next week’s clay-court major.

After a successful but busy return to the WTA tour in 2021 with titles won in Australia, Miami and on clay in Germany, the Queenslander had an injury hiccup two weeks ago and pulled out of the Italian Open in the quarter-finals with the recurrence of an arm injury. 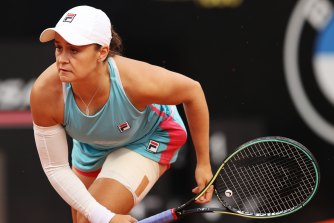 Ash Barty is feeling refreshed and ready to go at the French Open after an arm injury. Credit:Getty Images

In some ways, the rest and recuperation the 25-year-old had before heading to Paris has been a blessing in disguise.

“It was quiet. It was peaceful. We were down in the south of France, which was beautiful, the weather was great,” said the 2019 Roland-Garros champion.

“We were at a very small club down there which for me was perfect. I felt like we were able to do exactly what we wanted to on court. We were able to control loads [training time] and make sure my body was feeling 100 per cent.

“To be able just to control that week was really important, making sure that we’d arrive here feeling great and we have. I feel like I’m ready to play.”

The last two Parisian women’s champions – Barty and rising star Iga Swiatek – head favouritism but a dream match-up in the final isn’t possible with both women in the same half.

Barty was unable to defend her clay-court major title in 2020 after opting to skip almost the entire season due to concerns about travelling during a pandemic.

She returns to the French capital with the top ranking in women’s tennis and no doubts about her standing as one of the world’s best.

“Honestly, it feels like a lifetime ago,” Barty said about her breakthrough major 24 months ago.

“Coming back to the site here at Roland Garros is obviously pretty special. It’s pretty cool to be able to walk onto Chatrier [Roland Garros centre court] and have so many memories kind of come flooding back. 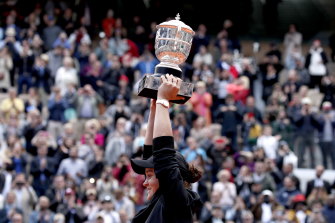 Ashleigh Barty with the trophy after her French Open triumph in 2019.Credit:EPA

“A lot of them I also don’t remember and it feels like it was such a long time ago, so it’s certainly a clean slate for us this week.”

Barty meets American Bernarda Pera in the first round.

While the 2020 Roland Garros champion, 19-year-old Swiatek, is also in Barty’s half, some of the Australian’s leading rivals in the bottom half include the powerful Belarussian Aryna Sabalenka and four-time major winner Naomi Osaka.

World No.2 Osaka was in the headlines this week after announcing she will not take questions from the press in Paris, saying the nature of news conferences puts an undue burden on players’ mental health.

Barty would not comment on Osaka’s personal circumstances, but said speaking to the media was one of her responsibilities.

“In my opinion press is part of the job. We know what we sign up for as professional tennis players,” said Barty.

“I can’t really comment on what Naomi is feeling, or on decisions she makes. At times press conferences are hard, of course, but it’s also not something that bothers me.

“I’ve never had problems answering questions or being completely honest with you guys. It’s not something that’s ever fazed me too much … It doesn’t keep me up at night what I say in here or what you guys ask me.”

It will be the second match on clay against the Spaniard in a manner of weeks for 21-year-old Popyrin, who lost to him in the round of 16 at the Madrid Open.

In an otherwise uneventful draw for the Australian contingent, wildcard Astra Sharma – winner of a WTA event this year – has drawn a qualifier.

The draw for the 2021 version of Roland-Garros threw up a twist with Nadal, Novak Djokovic and Roger Federer all in the same half.

According to the International Tennis Federation, it’s the first time that has happened for the distinguished trio, winners of nearly 60 major titles between them.

Nadal beat Djokovic in straight sets in the 2020 final for his record-extending 13th championship.

Djokovic is seeded No.1, and Nadal is seeded No.3 – the seedings adhere strictly to the ATP rankings, so the Spaniard’s unprecedented previous success in Paris is irrelevant.

The only certainties before the draw were that Djokovic would be on one side and No.2 Daniil Medvedev on the other; Nadal and No.4 Dominic Thiem were randomly placed and could have shown up in either half.

Federer, whose record for most weeks at No.1 in the ATP rankings recently was broken by Djokovic, turns 40 in August.

The Swiss legend is ranked No.8 after playing only three matches over the past 15 months because of two operations on his right knee. He could meet Djokovic in the quarter-finals but it won’t surprise if the 20-time major winner exits in the early rounds.