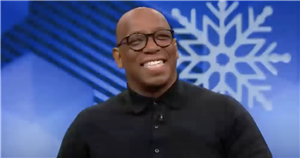 Arsenal legend Ian Wright has hailed Mikel Arteta for his “perfect” management of one star to avoid a Serge Gnabry situation.

The Gunners have been criticised for their management of academy players as part of their transfer strategy over the years.

And one player that has stuck in the mind of fans is the German, who made just 18 appearances for the north London side before being sold to Werder Bremen in 2016.

A transfer to Bayern Munich came two years later, with the forward scoring 40 goals to help them win the Champions League last season.

But Wright, who scored 185 goals in nearly 300 games for Arsenal, believes Arteta is avoiding a repeat with his management of a current youngster.

Speaking onThe Ringer’s Wrighty Housepodcast, the former forward said: “It must be brilliant going into training at the moment for someone like Emile Smith Rowe.

“He’s somebody who has had his injuries, he’s gone on loan, he’s done his stuff. For me, Emile Smith Rowe has paid his dues out there, waiting for his chance.

“I think that what Mikel has done now, the timing with which he’s done it, is absolutely perfect because I think if Emile Smith Rowe doesn’t get into this team, at this stage, and they carry on doing what they’re doing and persisting with people who are not performing at the levels they should – whether it’s Willian or [Nicolas] Pepe – I think you lose him. “Especially with January coming and then we’ve got a Serge Gnabry on our hands.”

Smith Rowe has started all three of Arsenal’s last games, which they have won consecutively to climb up to 11th in the Premier League table.

And Wright went on to praise Arteta for helping all of his players to raise their level.

“[Kieran] Tierney is amazing, future captain, you can see. Holding, [Pablo] Mari looks okay, he’s going to be tested at some stage and we’ll see that.

“[Granit] Xhaka and [Mohamed] Elneny in the middle there, just the energy.

“It’s seems like everybody has risen up a little bit.

“We beat a Chelsea side where people were thinking we were going to get hammered and we beat West Brom. West Brom drew with Manchester City!”

Arsenal do appear to be parting ways with Mesut Ozil after “agreeing” a deal with Fenerbahce.