These are worrying times for Melbourne Victory.

Touted as potential champions before a ball was kicked this A-League season, in their present form they will struggle to make the lower reaches of the top six.

It is early in the season – after four games it would be folly to write them off – but already they lag key rivals by anything between three and six points. 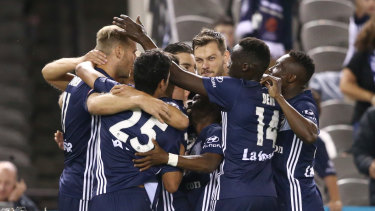 Victory took an early two-goal lead before collapsing to a 3-2 loss to Western United on Saturday night.Credit:Getty Images

Increasing the difficulty for new coach Marco Kurz is the fact that they will be without key players such as Robbie Kruse and Tim Hoogland for some weeks to come.

Kurz made it clear after they collapsed at home having been two goals to the good against Western United on Saturday night that their return was still some way off. Andrew Nabbout, who scored the only goal in Victory's only win of the season, against Brisbane, is also out with injury.

Victory are not getting enough out of their midfield, and while Ola Toivonen is a class act who can create chances for himself and his teammates in the forward third, he cannot do it all alone.

In what should concern Victory's restive fan base even more, Kurz said after they surrendered their 2-0 lead on Saturday night that the team lacked confidence when they conceded a goal to Western United in that frantic opening 15 minutes when three goals were scored.

"We started really well, you cannot start better in a derby. After we conceded the first goal, we dropped a little bit too much back, gave them too much time to set up their game.

"I think the biggest point was what was happening after the first goal from [Western striker Alessandro] Diamanti, that we lost a little bit the confidence, we lost our behaviour to press them at the right moment."

Kurz, as he must, preached caution and patience.

"The season is long. For us at the moment it's not easy, but for sure we keep going, we come back in a good way for sure. The start isn't what we expected, but we are positive and hard working for the return."

There are also some concerns about midfielder Kristijan Dobras, who scored his first goal for the club to put Victory 2-0 up early in the game and Toivonen, who netted the opener a minute before. The Swede fell heavily and left the pitch for treatment in the second half before returning.

"I think Kristijan got a knock and Ola landed on the foot from an opponent and ankle a little bit, but he finished the game. We must have a look now at the medical stuff and then we can give an answer," said Kurz.

Victory have seven days to regroup before they face Wellington at home before a difficult away trip to big rivals Sydney.