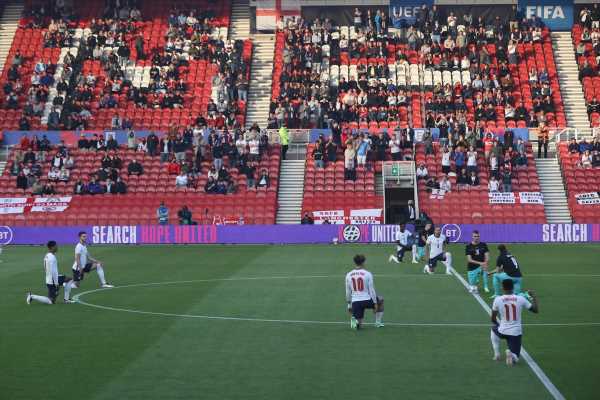 On Wednesday night, 563 days after England supporters were last inside a stadium to watch their national team who are priming for a major tournament, a swathe decided to mark the occasion by booing players taking the knee.

To frame it another way that highlights the reality of this action: some were heckling the symbol for equality for the black and mixed-raced players in the squad, which is supported and was pushed for by their peers.

A demand that transcends football but has seen its figures be leading lights in this fight as with other athletes across sport.

Stop. Right. There. No, it’s not about the Black Lives Matter movement, no matter how much you want to ignore what has been said about it and the history of the gesture.

And black lives do matter. There is no addition to that phrase to suggest other lives do not, no matter how much you want to convince yourself it’s in the fine print.

No, it’s not about politics either. Human rights are not attached to any party.

If you genuinely want to be informed about taking the knee, here is a brief history.

In 1965 during a civil rights march, Martin Luther King Jr. bent down with one arm resting on his knee during a group prayer prior to going to jail in Selma. They had wanted the right to vote and were peacefully protesting but 250 were arrested for parading without a permit.

Further back, a drawing from the 1780s of an enslaved black man became an emblem of the British abolitionist movement in the 1800s. Behind the sketch was a scroll with the question: “Am I not a man and a brother.”

Fast forward and in August 2016, American Football quarterback Colin Kaepernick sat on the bench during the US national anthem to protest police brutality and racism in a pre-season game.

“I am not going to stand up to show pride in a flag for a country that oppresses black people and people of colour,” he said a day later.

“To me, this is bigger than football, and it would be selfish on my part to look the other way. There are bodies in the street and people getting paid leave and getting away with murder.”

Nate Boyer, a military veteran and former NFL player, had been discussing taking a stand against oppression with Kaepernick and advised him to kneel as it was more “respectful”.

The former San Francisco 49ers star switched from sitting to getting down on one knee on 1 September 2016. He was ostracised, playing his final game four months later.

On 5 June, when commissioner Roger Goddell admitted the league were wrong “in silencing our players from peacefully protesting,” he failed to mention Kaepernick during his one minute and 21 second statement.

In the NBA, the activism of LeBron James, Dwyane Wade, Kyrie Irving and the late Kobe Bryant – to name a few – compelled the sport to be more open and involved in shunning discrimination and promoting meaningful transformation.

Lewis Hamilton has been trying to steer Formula One in the right direction too.

All they and the footballers are after is equality, forcing sport and the world at large to be more representative of and open to everybody.

When Alexandre Lacazette walked up to Slavia Prague in order to face them while taking the knee, before eviscerating them with his goals, it was a direct middle finger to racism.

Their defender, Ondrej Kudela, had been banned for 10 matches after racially abusing Rangers’ Glen Kamara, a former Arsenal player, during the Europa League last-16 tie in March.

Both the club and the guilty party had vehemently denied they did anything wrong. Kudela was extremely fortunate to have such a lenient suspension – zero tolerance doesn’t equal such a slight punishment.

Repeatedly, players have explained why they take the knee. Their reasons are overlooked, while they are screamed back at via social media about some other nonsensical factors.

There is also a routine flagging of the very few that believe it has become too much of a token gesture.

That emotion is derived from the fact that oppression, systemic, overt, or otherwise, is still unfortunately alive and well.

When you boo their act against inequality, you fuel that feeling.

England’s match-winner against Austria was a supremely skilled 19-year-old from Ealing, born to Nigerian parents.

Bukayo Saka’s first name, which is derived from the Yoruba tribe, means “adds to happiness.”

Seeing him and so many gifted young black and mixed-race footballers take centre stage for England is indeed joyous.

They deserve support, applause and understanding – not the booing of a fundamental belief, of a basic right, and on a wider scale, their entire identity.