It has been a strange start to the Spanish top-flight season. Real currently sit fourth in La Liga after eight games, despite victory over Barcelona at the Nou Camp.

Zinedine Zidane’s men are four points behind league leaders Real Sociedad and ten clear of bottom-placed Huesca. Complacency has been blamed for two league defeats, to newly-promoted Cadiz and at Valencia, where they were soundly beaten 4-1 in their last outing.

Madrid’s defence was a shambles against a Valencia team stripped of their key assets as a result of no European football and Covid-19. Head coach Javi Gracia had even threatened to walk after a mass clear-out of his squad to reduce the club’s operating budget by 40 per cent.

Ferran Torres, Dani Parejo, Ezequiel Garay, Francis Coquelin, Rodrigo Moreno and Cristiano Piccini all departed but Carlos Soler scored a hat-trick of penalties to turn up the heat on Zidane. 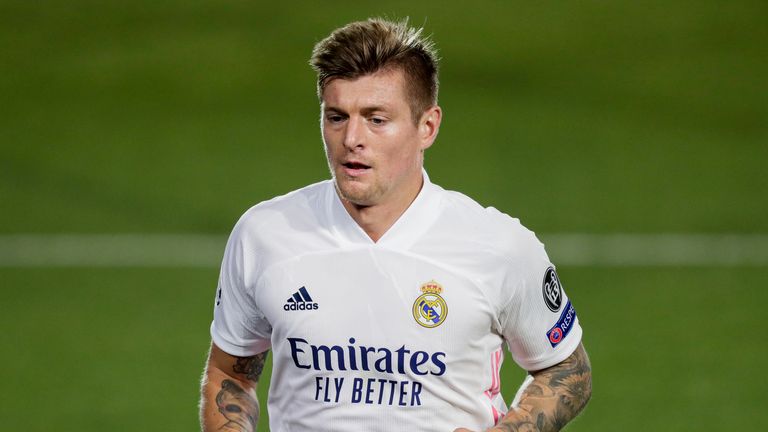 Of equal concern to the board will be Real’s hopes of qualifying for the Champions League knockout stages, with the side currently third in Group B at the midway point, ahead of Inter Milan but trailing Borussia Monchengladbach and Shakhtar Donetsk.

Toni Kroos has been vocal in the press this week, telling Spanish outlet Marca: “It’s true we’re missing something.

“It’s not a secret. We need to be constant – if you look at our results, you see two good, one bad. We have to do better. We have to improve if we want to win something.”

Zidane will be the first to acknowledge that at Real Madrid, where there are not results, there will be discussions. 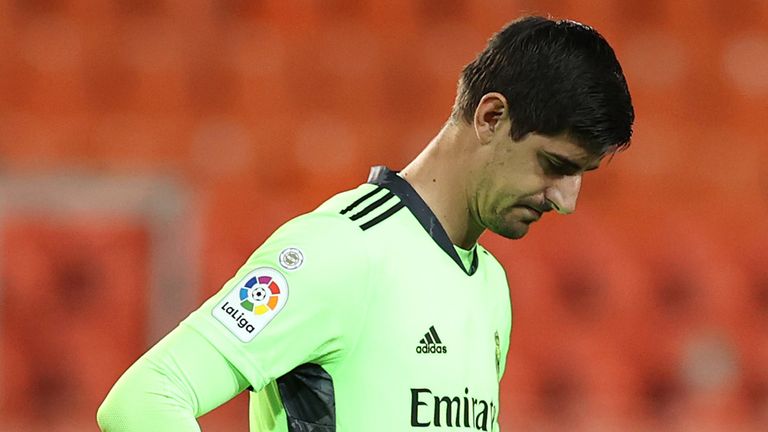 Just over 12 months ago, the Frenchman was under immense pressure when he took his side to face Galatasaray in Istanbul where failure to meet expectations might have ended his second spell as manager. Kroos’ strike was enough to secure a narrow 1-0 win that proved the turning point in Real’s season, and the start of a 21-game unbeaten run.

The German midfielder added: “With Zidane, we’ve already lived through times like this and we usually come out of them. In the end, all we can do is improve and try to win games. The coach will find the solution.”

Real’s currency has always been trophies, but the context of their recent struggles cannot be removed from the ongoing global pandemic that has placed greater emphasis on a transfer strategy focused on young players with potential as opposed to established names. 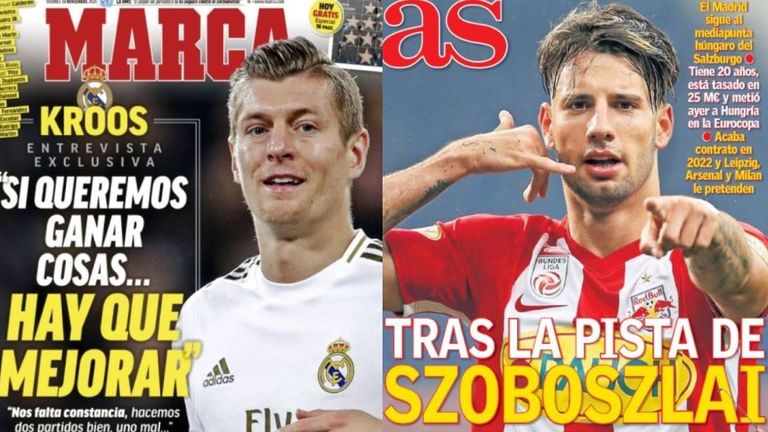 Juni Calafat, the club scout behind the signings of Vinicius, Rodrygo and Eder Militao, is said to have been impressed after witnessing him score during his side’s recent 3-2 defeat to Atletico Madrid in the Champions League.

Szoboszlai’s dramatic last-minute winner to send Hungary to Euro 2020 with victory over Iceland will only add to his value, but with his current deal at Salzburg running out in 2022, they will most likely look to cash in next summer following the tournament.

But if Madrid’s results don’t improve, they may be forced to move during the January transfer window to inject energy into an ageing midfield.

La Liga TV presenter Semra Hunter believes Zidane will have a lot to think about over the international break, telling Sky Sports: “The defence has been their Achilles’ heel pretty much all season long. They’ve been very poor at the back. Against Valencia, it was next level bad.

“All four of Valencia’s goals were a direct consequence of errors made by each of the four defenders – Sergio Ramos, Lucas Vazquez, who was filling in as a right-back, as well as Marcelo all gave away penalties while Raphael Varane scored an own goal. 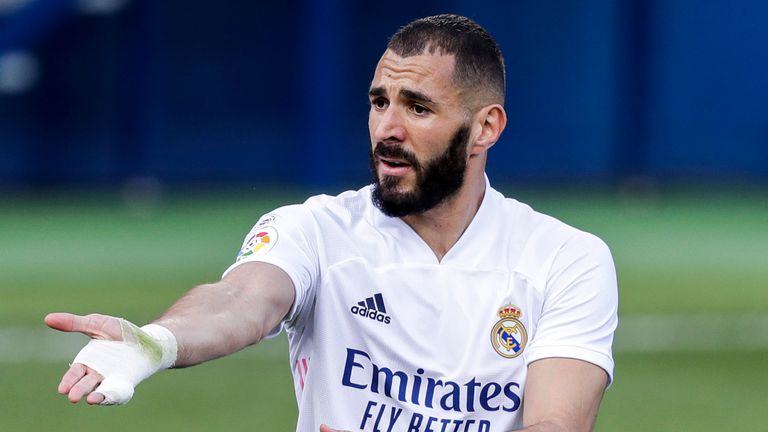 “To put that defeat into context, this was the first time in Madrid’s 118-year history that they’ve conceded three penalties in the same game. On top of that, in La Liga’s 90-year history as a competition… in 25,521 games, this has only happened three times – in 1958, 1996 and now.

“Certainly, Madrid have come under a lot of pressure following that performance against a side that before the game were just one place outside of the relegation zone. Zidane has a lot of soul-searching to do.”

Those unforgiving Spanish front pages didn’t hold back, claiming that Madrid are ‘in ruins’ while another referenced there being a ‘crisis in the White House’ but there were mitigating factors in their latest setback. 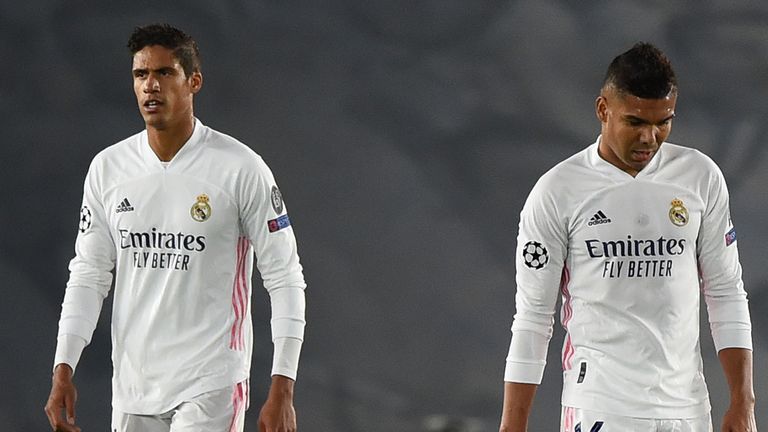 Eden Hazard and Casemiro were both absent at the Mestalla after positive coronavirus tests, but Zidane’s preference to start with Isco ahead of Kroos was still criticised by some sections of the Spanish media as well as supporters. Ferland Mendy was also rested at left-back with Marcelo being given the nod, but those decisions backfired badly.

In the 27 league games the experienced Brazilian defender has played since Zidane returned as manager in March 2019, Madrid have lost nine of them compared to no defeats in the 29 fixtures he has been absent. It’s only one of the areas that must be addressed if Real are to get their season fully up and running.

It is unlikely Zidane will field the same XI as he did at Valencia again this season, but he will be concerned with the lack of goals in his squad. Karim Benzema has scored five in his last four games, but the 32-year-old will be demanding more from his team-mates to help carry the load.

Changes in personnel is understandable given the congested fixtures list and demands of playing every three days, but the buck will ultimately stop with Zidane. He has guided the club to three of their 13 Champions League titles – but failure to progress out of the group stages for the first time in their history would be unthinkable.