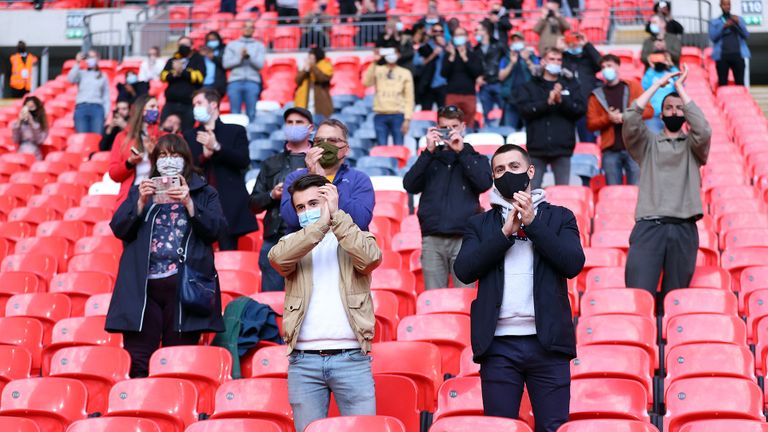 In The Times, Henry Winter writes: ‘What is staggering about their approach of these rebels without a conscience is their sheer naivety. Does anybody of sound mind and proper understanding of football actually advise these sheikhs, oligarchs and billionaire businessmen?

‘Clearly not. Because the first hint of a closed shop was always going to anger supporters, including those of the shameless six. Even in such a tribal club world, these fans can see the dangers of a European Super League, how it stifles competition, and kills dreams.

‘There is an arrogance bordering on the laughable, particularly, of Arsenal and Spurs to consider themselves part of a European elite.’

In The Daily Mail, Martin Samuel scorns: ‘A plastic competition, watched by plastic fans, of plastic clubs. Forget the past, forget the Busby Babes, or the treble, forget Istanbul, or the doubles. These might as well be new clubs, in a new league, and newly moulded, in plastic.

‘A league that no one else can get into; a league that you can’t get out of no matter how useless you are. The end of meritocracy. That’s plastic. A plastic closed shop that only the shallowest glory hunters would find distracting.’

Labelling the proposal a ‘cowardly move’, The Sun’s Dave Kidd calls on fans to lead the opposition: ‘True supporters of those clubs will appreciate the importance of the English footballing pyramid as well as those who follow less wealthy clubs – and they will be appalled by these proposals.

‘Now these, along with supporters of Manchester City, Arsenal and Tottenham, must make their voices heard. Loud and clear.’

In The Daily Telegraph, Jason Burt states starkly: ‘The desire for a closed-shop European Super League is purely driven by greed’ and describes the proposal as a ‘declaration of war’.

And on Twitter, the Telegraph’s chief football writer Sam Wallace concludes: ‘The greed is, sadly, not surprising. More remarkable is these 12 clubs really think they can ‘win the argument’, with fans, govts. They truly believe this is ‘better for the game’. I can’t think of a more universal condemnation of a football proposal. Even Var has its supporters.’

And how the condemnation continued on social media…

What an embarrassment we’ve become @LFC think of all the people who have come before us at this club who would be equally embarrassed as well. #SuperLeague https://t.co/zLxhNyeaXB

So Leicester, relegated to English football's third tier in 2008, have since become English champions, reached the quarter-finals of the Champions League and are now in the FA Cup final. A minor antidote to news of the Gordon Gekko league.

Look at the state of the Super League masthead design and imagine how bad the new Super League trophy is going to look. You'd have to think somewhere between the Emirates Cup and the ICC Champions Cup

Super League has always been inevitable. It turns out these very rich, ruthless people did not buy your club because they love heritage old stories and community sport

Arsenal: “More information can be found in a joint statement released by the Founding Clubs below. In the meantime, our focus is on finishing this season as strongly as possible.”

Why bother? Not like it really matters if this all goes ahead.