West Ham 4-2 Burnley: Felipe Anderson bags a second-half brace as Javier Hernandez kills off a late comeback from the Clarets

Manuel Pellegrini is not a man for big, emotional gestures, but even he allowed himself an air-punch of relief here.

In a mad game that ebbed and flowed against Burnley, West Ham emerged with the points to delight the London Stadium and relieve their manager in the same moment.

Pellegrini this week called out club-record signing Felipe Anderson’s struggles for form; here, he witnessed his team dominate but fail to tighten a grip on Burnley or take control. 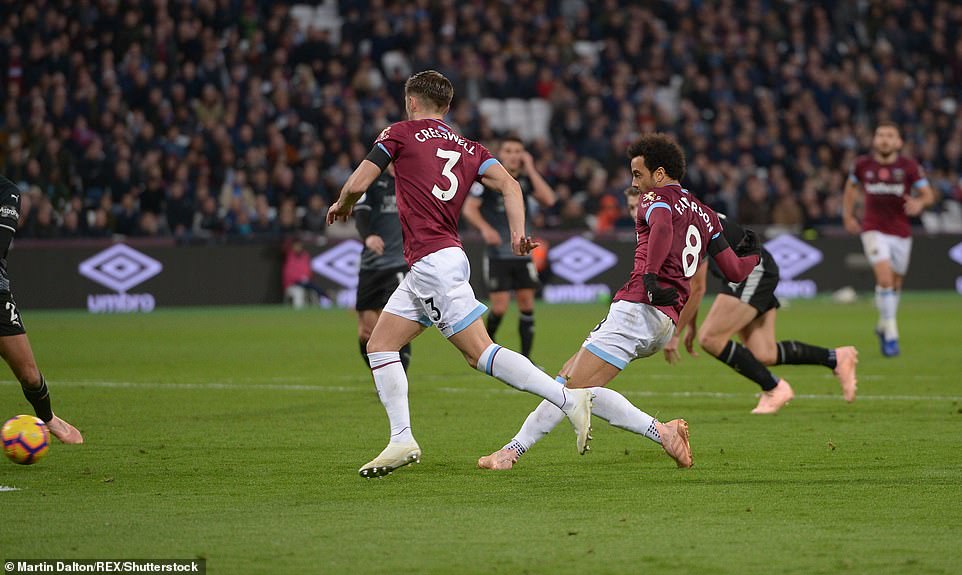 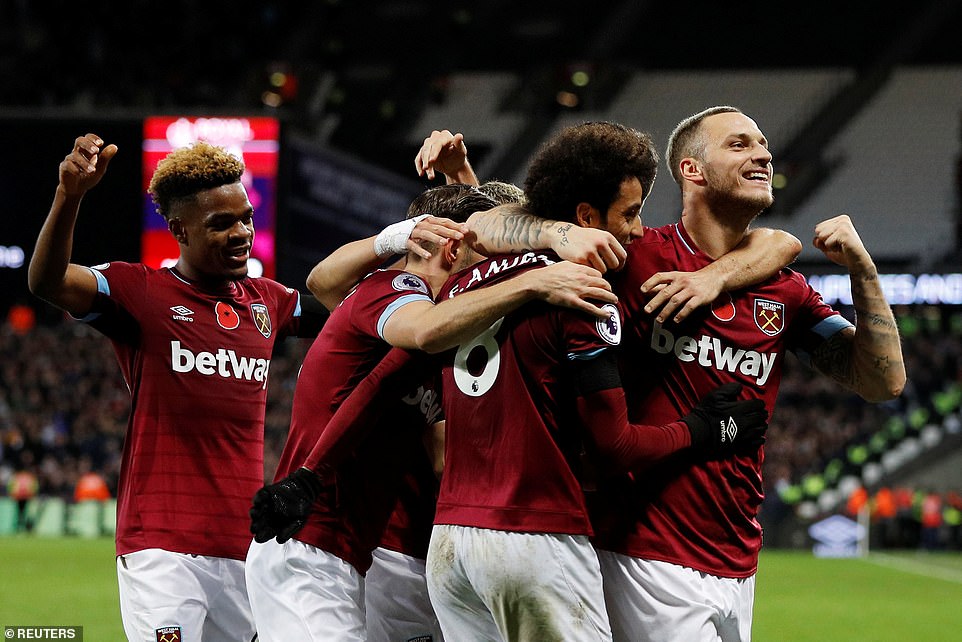 MAN OF THE MATCH: Felipe Anderson Marko Arnautovic (No 7) pounced on a James Tarkowski mistake to give the Hammers an early lead on Saturday. For more of Sportsmail’s fantastic MATCH ZONE feature, click here.

Twice they were pegged back by the visitors before Anderson saved the day.

Two goals and a starring role alongside the excellent Marko Arnautovic and fearless youngster Grady Diangana and West Ham rescued a win in the last six minutes.

West Ham splashed £40million on Anderson from Lazio and have seen limited return so far. This, they hope, was a vision of what is to come: quality, a calmness of mind and a clinical streak.

West Ham certainly started the slicker of the two sides, Burnley perhaps cowed by the fear that comes with having lost their last two matches by an aggregate score of 9-0.

But those games were against title-chasing Manchester City and Chelsea, not a 20-year-old winger making just his second Premier League start. 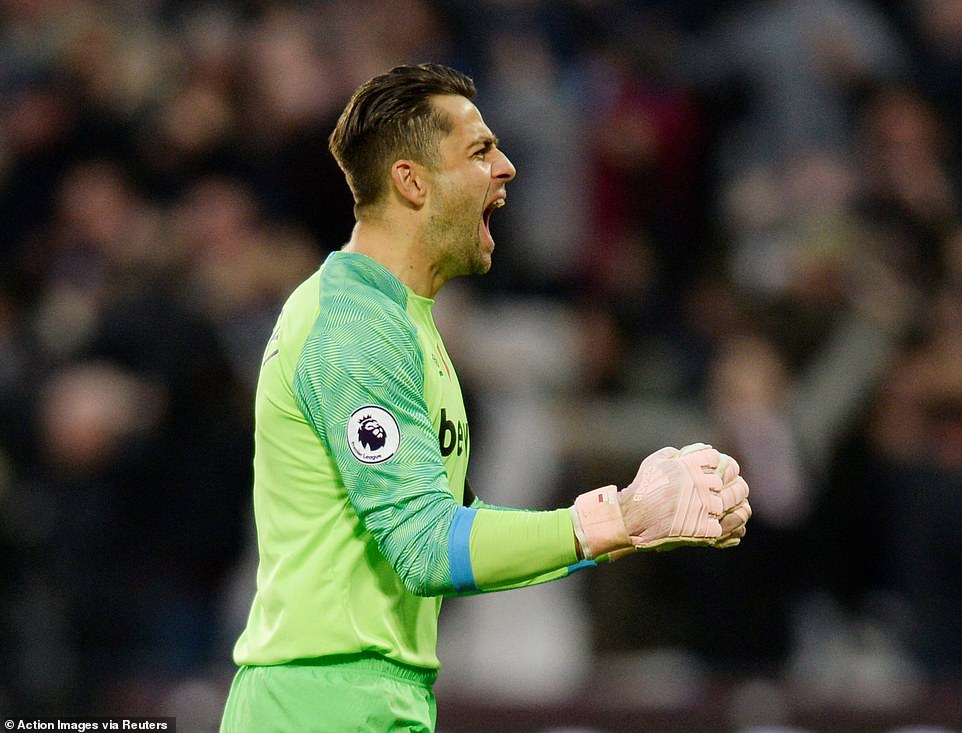 West Ham academy graduate Diangana looked fearless, seeing plenty of the ball and dancing around Charlie Taylor at any opportunity — the chance offered to him by Andriy Yarmolenko’s injury absence being gleefully taken.

But there was little joy in the early battle between Arnautovic and Tarkowski that frequently threatened to bubble over.

Tarkowski snapped at the ankles of the Austrian forward six minutes in – unpunished, to Arnautovic’s annoyance.

He made that very clear to his marker, going nose-to-nose moments later when Ben Mee’s foul on Pedro Obiang provided a break in play. 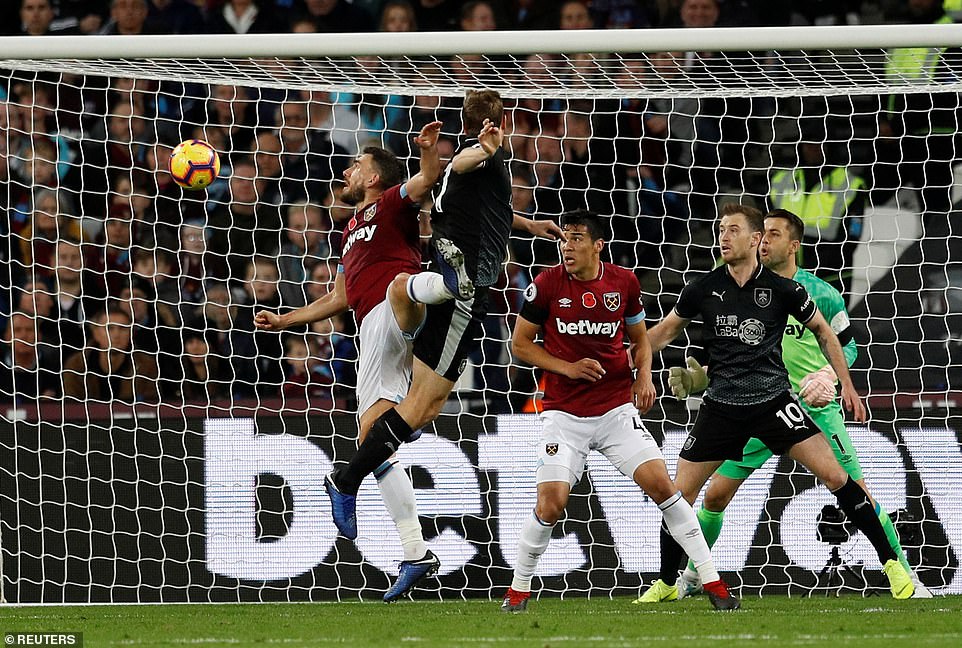 Chris Wood (centre) rose high above Robert Snodgrass to level things up for Burnley, minutes after coming off the bench 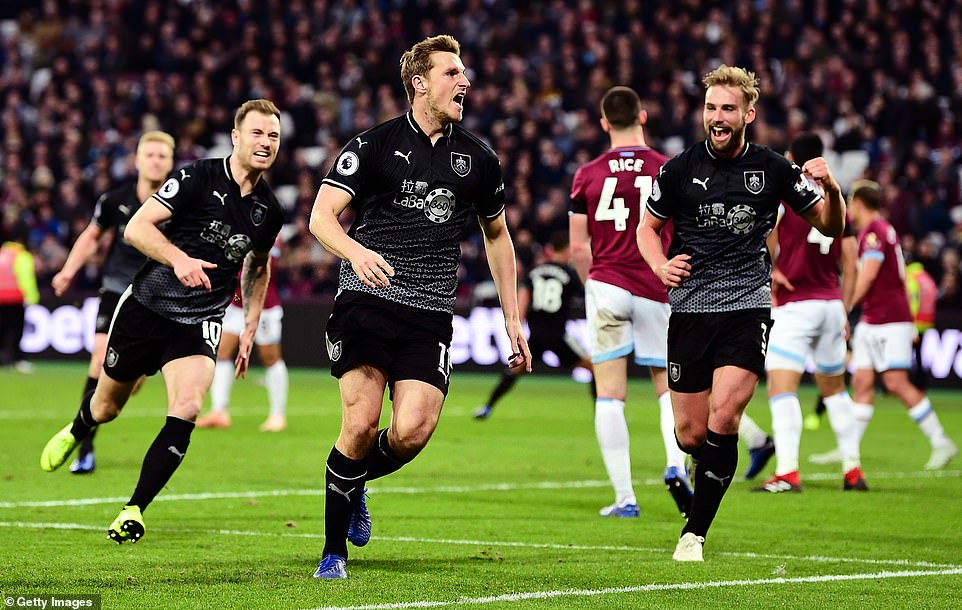 So perhaps Tarkowksi’s guard should have been up when he turned on Ashley Westwood’s pass with the intention of playing it back to goalkeeper Joe Hart on 10 minutes.

Instead, Arnautovic was straight on to him, taking advantage of the second of hesitation to rob his rival of the ball before slotting past Hart.

Subtle as ever, Arnautovic celebrated by laughing in Tarkowski’s face.

The hosts continued to press forward and when Arnautovic escaped his marker again, this time on the end of a one-two with Felipe Anderson, Hart saved well to stop the lead being doubled.

Back at the stadium he called a temporary home last season, the former England No 1 was being regularly tested.

At the other end Lukas Fabianski was far more relaxed until he had to nervously steer a Mee header at a rare Burnley corner away from goal with a few black away shirts lurking.

Mee was certainly faring the better of Burnley’s two centre backs and brilliantly scooped an Anderson curler, bound for the top corner, over the bar from his own goal-line moments later just after the half-hour mark. 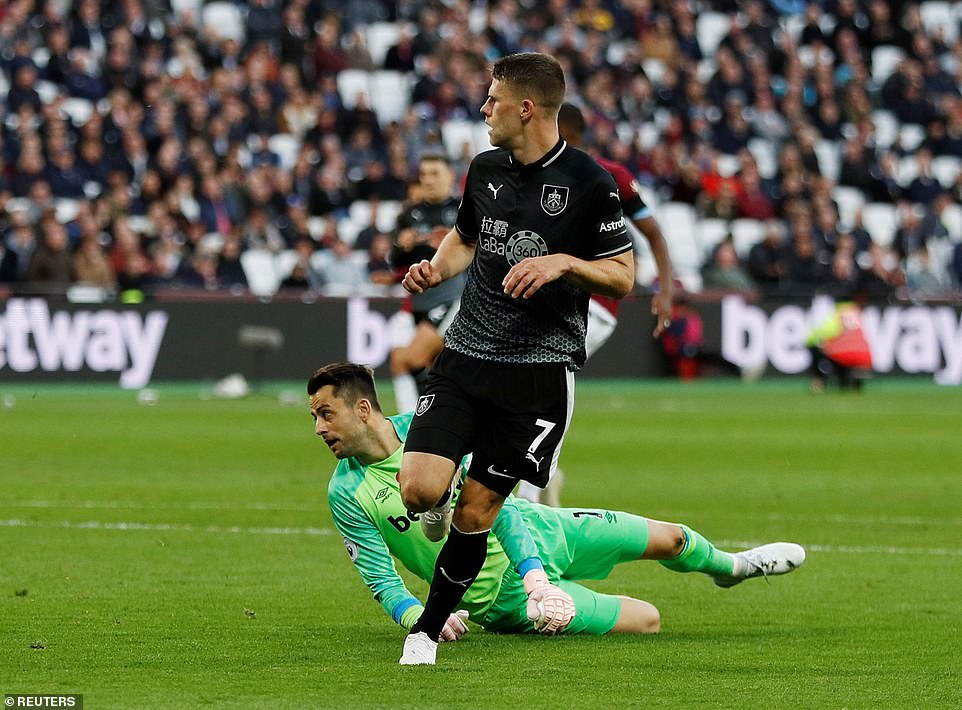 There was less to admire about Steven Defour’s challenge on Diangana moments later which should have seen West Ham given a penalty, little of the ball won. Referee Roger East was unmoved.

And as so often happens with these things, that decision would prove crucial minutes later.

Issa Diop’s header away from a long ball was unconvincing, falling to the feet of Westwood who weaved a lovely pass through to Johann Berg Gudmundsson to touch home a classy finish.

Half-time, and a sense of injustice mixed with opportunity squandered haunted West Ham as they headed down the tunnel.

The second half started with plenty more West Ham possession — Hart saved from Snodgrass and Arnautovic — but the zip seen from the start of this game seemed to have disappeared.

Enter Javier Hernandez, offside with his first touch of the ball and almost converting an Arnautovic cross with his second, the Mexican at least breathed some life into a fading attack.

Mee, again, was the man to intervene to stop Hernandez scoring, this time robbing him of the ball as Arnautovic’s cross looked on a plate for the No 17 to score after good work by Anderson down the left. 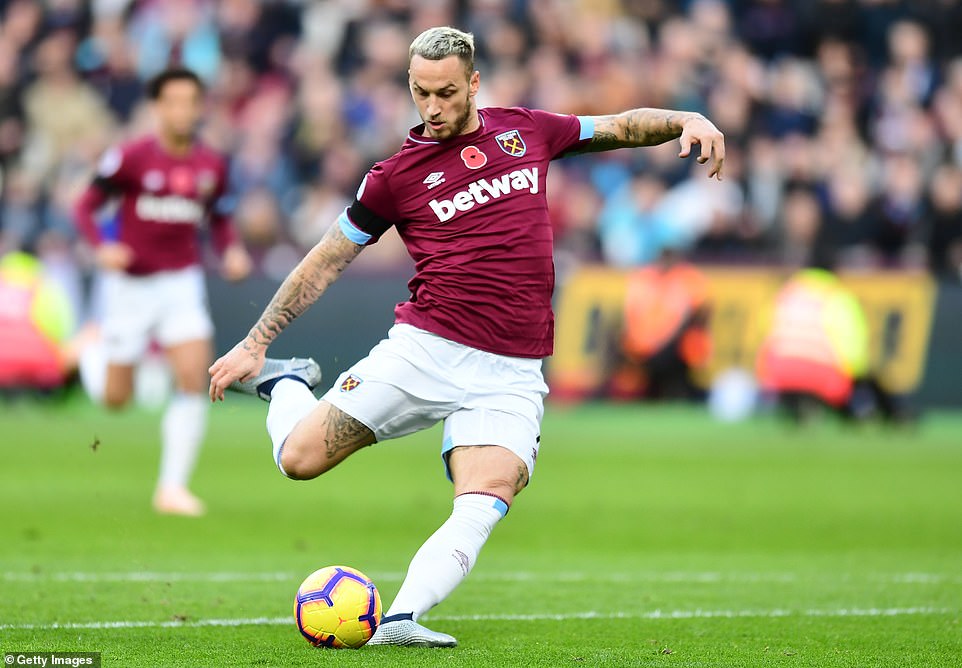 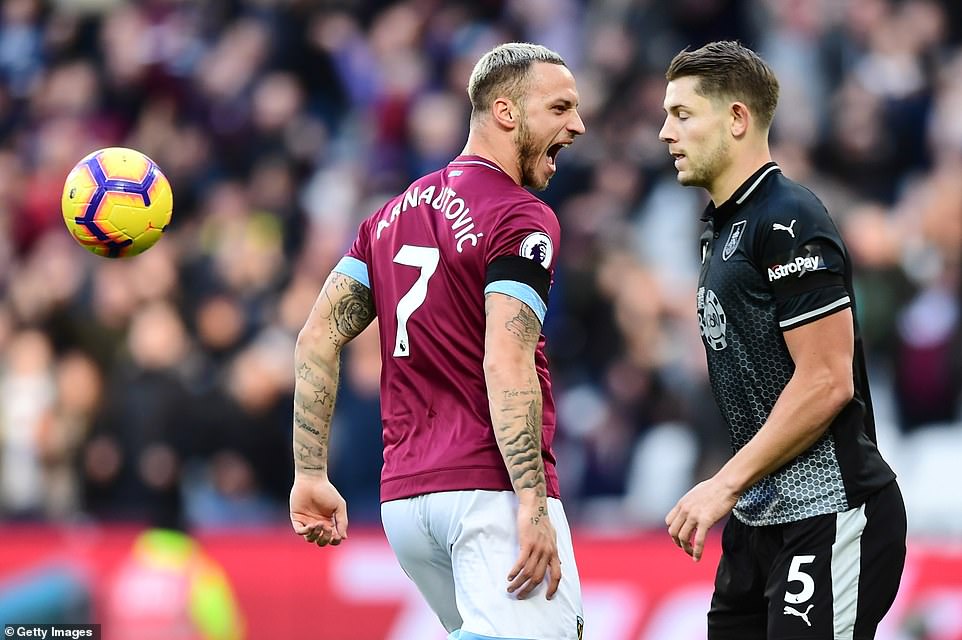 West Ham poured forward again and this time, with some end product.

If Mee had been brilliant for Burnley, partner Tarkowski was his team’s undoing. With theArnautovic turned from the centre circle, drove forward and passed to Diangana.

Driving forward with intent, the youngster was clattered by a terrible Tarkowski challenge — but not before he had slipped the ball left and into the path of Anderson, unmarked, to put it through Hart’s legs.

But Burnley came back into it again, somehow. Wood and Ashley Barnes came on as substitutes on 72 minutes, followed by Robbie Brady three minutes later. 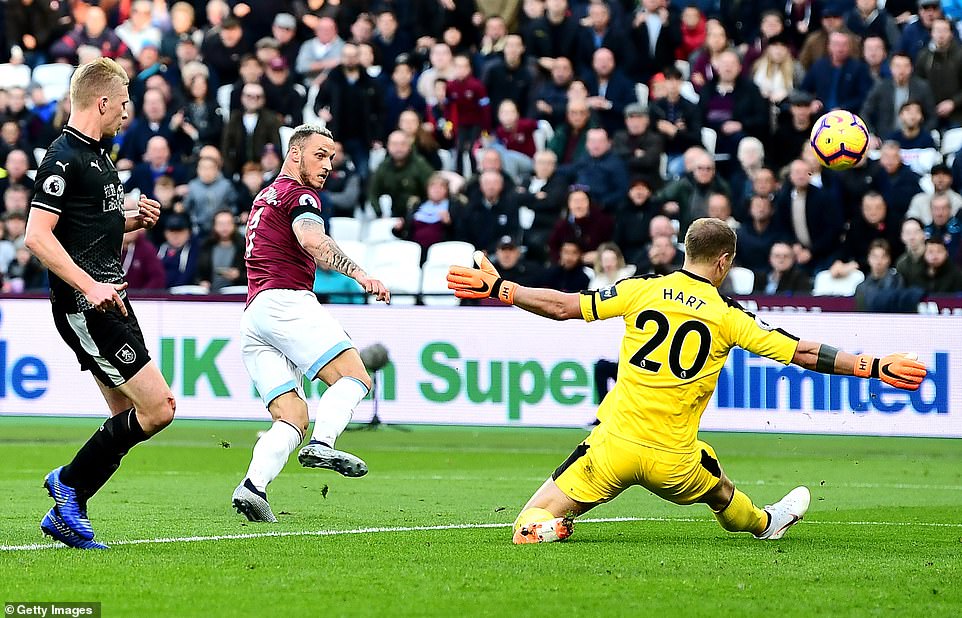 Give it another two and they were back level again: Brady’s corner guided straight on to the head of Wood who, after a grapple with Robert Snodgrass, smashed his header home.

Still time for more drama: Anderson hit the post at the end of another Diangana-Arnautovic cycling of the ball.

Burnley could not heed this warning quick enough when the summer signing from Lazio scored the fifth goal, and eventual winner of this mad game.

Wood headed on to the bar again with five minutes to go.

For a team so dominant, West Ham could not breathe easy — at least until Hernandez fired in the fourth from Michael Antonio’s stoppage-time shoulder-pass.