Report and free match highlights as Raul Jimenez scores an own goal and Sebastien Haller heads home fourth; West Ham net their first goals against Wolves since Nuno Espirito Santo’s side were promoted to the Premier League two seasons ago

The Hammers had performed well against Arsenal last weekend but were unable to take any points and looked far from a side without a Premier League win this term when Bowen (17) curled home a neat finish early on.

The chances continued to fall for West Ham – with David Moyes managing the team from home as he completes a period of Covid-19 self-isolation – and they finally added their second when Bowen (57) slotted home from close range after the break.

The third came via an own goal when Tomas Soucek’s glanced header was diverted into the net by Raul Jimenez’s shoulder (66), piling the misery onto an out-of-sorts Wolves, who were mostly restricted to efforts from distance. Substitute Sebastien Haller (90+3) then powered a header home in injury time to seal West Ham’s first win of the season.

The victory sees West Ham move up eight places in the table and into tenth and have kept their first clean sheet at home since New Year’s Day. Wolves, meanwhile, drop into 16th.

How West Ham swept Wolves aside 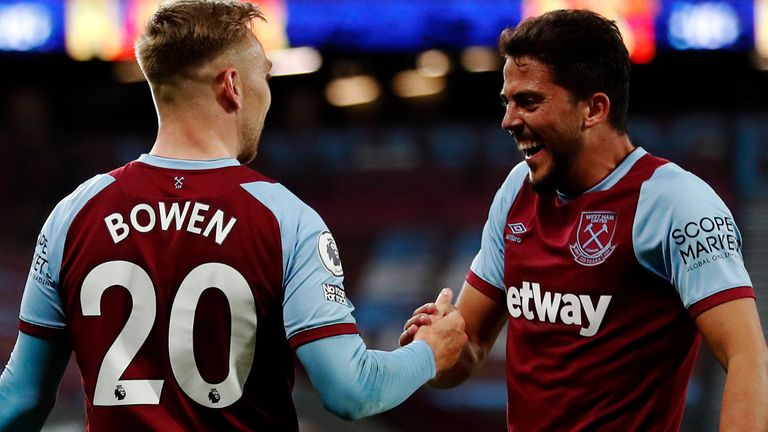 The first half took a while to get going, and it was Bowen’s neat finish that sparked the game into life. Referee Martin Atkinson allowed Pablo Fornals to take a quick free-kick near the centre circle, and he swept the ball into Bowen’s path. The forward then curled the ball low around Romain Saiss as the Wolves defence closed in and found the back of the net.

Rui Patricio was twice called in action not long after, first saving from the lively Michail Antonio before Soucek forced a leaping save from the Wolves goalkeeper after a good run from Arthur Masuaku down the left. At the other end, Pedro Neto tried to curl home from the top of the area but it flew wide.

Man of the match: Michail Antonio.

But it was West Ham who continued to carve out chances. On the half an hour mark, Antonio held the ball up well on the left before picking out Soucek in the middle, but his header was saved by Patricio. Bowen was then waiting to hook the rebound towards Antonio at the back post but Willy Boly just did enough with a glancing header to see the ball away.

Their biggest miss came two minutes before the break. Antonio was involved once again, easily turning past Saiss on the right before striking but it was saved by Patricio. The loose ball then fell to a waiting Fornals, who only needed to slot it home, but he caught the ball with his shin and sent it thundering into the empty London Stadium stands.

West Ham would have been disappointed to have not scored another in the first half but only had to wait 12 minutes after the break to find the net again. It was some more good play from the hosts as Antonio picked up a pass down the left before cutting it back for Fornals at the top of the area. His strike smashed onto the post but Bowen was lurking to slot home his second of the evening.

West Ham continued to look comfortable and added a third in the 66th minute. Aaron Cresswell delivered a wonderful corner, which an unmarked Soucek met at the near post with a glancing header. It took a deflection off the shoulder off Jimenez on the way through and he was awarded the own goal in what was the Wolves striker’s only real goalmouth action of the game. 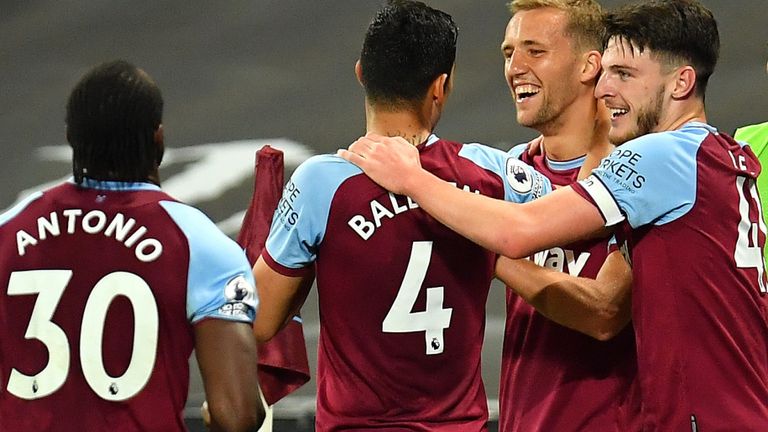 The Hammers then rounded off their emphatic victory with almost the last kick of the game. Having scored four goals in two Carabao Cup fixtures so far this season, Haller came on as a late substitute and bagged a much-needed Premier League goal. It was some good work from Declan Rice at the top of the area to pick out Masuaku on the left. His cross was then powered home by a bullet Haller header as West Ham dealt one final blow.

Man of the match – Michail Antonio

It was another impressive performance from the West Ham forward, who has carried his wonderful form after the Premier League restart into the new season.

He was involved in nearly every West Ham attack – and there were plenty of them – and Wolves just could not contain him as he made runs to set up his team-mates. He won 52 per cent of his 25 duels and won five fouls.

Antonio was unlucky to come away with a goal or assist to his name – having had two shots on target – but once again demonstrated his importance to West Ham’s attacking success.

West Ham will be in Carabao Cup action in midweek when they travel to Everton on Wednesday (kick-off 7.45pm). They will then visit Leicester on Sunday in the Premier League (kick-off 12pm). Wolves will also play on October 4 when they host Fulham, live on Sky Sports (kick-off 2pm).