Central Coast Mariners are on the cusp of ending their seven-year search for finals football after claiming a 2-1 win over Macarthur on Thursday night but, despite their title rivals being significantly weakened due to national duty, are still considering themselves rank underdogs.

Newly crowned premiers Melbourne City and second-place Sydney FC have each lost three players for the finals due to international selection but Mariners coach Alen Stajcic doesn’t expect those absences to diminish the credentials of the top two. 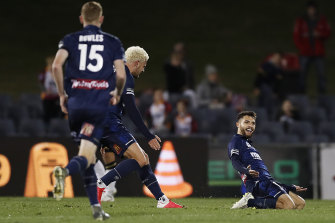 Daniel De Silva celebrates what turned out to be the winner for Central Coast.Credit:Getty

The selections may appear to even the field heading into next month’s finals series but Stajcic says the two biggest-spending clubs have more than enough depth at their disposal to remain favourites. The Mariners will only lose one player to the Socceroos – defender Ruon Tongyik – but are light on depth of talent as the club operating on the smallest budget in the A-League.

“If we are going to be real, have look at City’s line-up and budget and depth compared to ours. They could lose 10 players and they still have more budget in their line-up than we have,” Stajcic said. “We have to punch above our weight every time we go onto the field.”

Similarly, attacking midfielder Daniel De Silva shrugged off suggestions their road to a possible title would be made easier by the absences of City and Sydney FC stars in the finals series.

“They have a good squad depth as well,” De Silva said. “We go into the game with the same mentality and same focus to get the job done.”

De Silva scored the winner as the Mariners continued their surprising season by beating the Bulls in Campbelltown, coming back from a goal to move up to third on the table.

Macarthur started the brighter and took the lead in the 17th minute through Spanish attacking midfielder Markel Susaeta. Latching on to a long-range through ball by Denis Genreau, Susaeta chipped Mariners’ goalkeeper Mark Birighitti with his first touch to open the scoring.

Central Coast drew level on the half-hour through the unlikely source of full-back Jack Clisby. After clever link-up play between Marcos Urena and Matt Simon, the latter played a smart pass across the top of the box to the oncoming Clisby who lashed a powerful shot into the far corner of the net to score his first goal of the season.

Clisby thought he had his second minutes before half-time, firing another ferocious shot into the corner of the net. However his celebrations were cut short by VAR, which spotted Urena offside in the build-up.

The Costa Rican remained the architect for the Mariners after the break, finding Silva in space on the edge of the box. With time to pick his placement, the Olyroo struck a curling shot into the top corner of the net to seal the win.