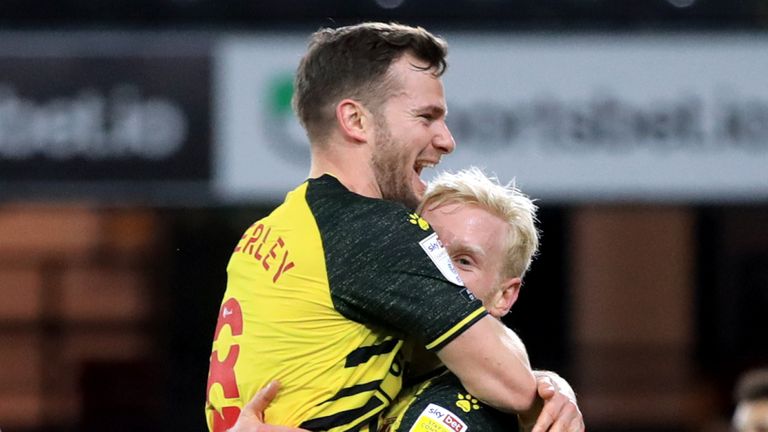 Watford moved level on points with second-placed Brentford as they held off a late fightback from Derby to win 2-1 at Vicarage Road.

Wayne Rooney’s Rams made a confident start but the hosts took the lead when Joao Pedro flicked the ball past David Marshall (19), before Will Hughes added a quickfire second (21) in his first game against his former employers after leaving Pride Park in 2017.

Watford defender William Troost-Ekong turned Nathan Byrne’s cross into his own net to reduce the deficit late on (77), before Byrne’s corner inside the final 10 minutes was kept out by a combination of the woodwork and goalkeeper Daniel Bachmann, though they could not find an equaliser.

Xisco Munoz’s team are now four points behind leaders Norwich after their third straight win without conceding, though they have played a game more, while Derby stay 17th, six points clear of the Championship relegation zone.

How Watford began to close on the Championship top two

Though Andre Wisdom’s last-gasp winner against Wycombe in midweek gave Derby a fifth win in six, Rooney rang the changes in search of an improved performance at Vicarage Road, with Byrne among five players to return to the starting line-up in Hertfordshire. 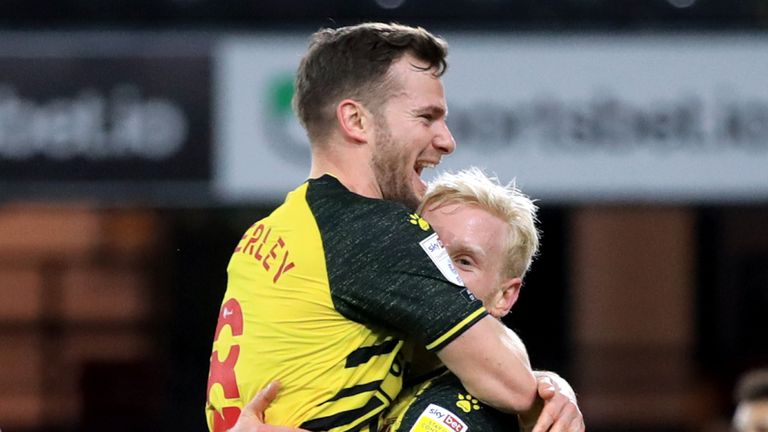 In the opening 15 minutes of the game, the Rams looked confident as they stroked the ball around the pitch, though their path to goal was narrowed by a Watford side content to soak up the early pressure placed upon them and wait their turn, despite Munoz’s animated gestures in the dugout, urging them to get forward.

It was not long before they did. Kiko Femenia threaded the ball through to Ismaila Sarr on the right flank, whose pace proved too much for Lee Buchanan, allowing him to square the ball for Joao Pedro to improvise a flicked finish that crossed the line via his heel.

Within two minutes they added what would prove to be a decisive second, when Tom Cleverley steamed into the box and fed Nathaniel Chalobah. The one-time England international then backheeled into the path of Hughes, who steadied himself and fired in through a crowd.

Before the break, Colin Kazim-Richards headed home from a corner but saw his effort chalked off for a foul on Daniel Bachmann, despite replays suggesting referee Tim Robinson’s decision was incorrect, with the goalkeeper having moved into trouble of his own accord.

It would be harsh to say the hosts rested on their laurels, though they did pass up opportunities to extend their advantage after the break, most notably when Sarr ghosted in off the right, opted for power over placement and skewed wide. 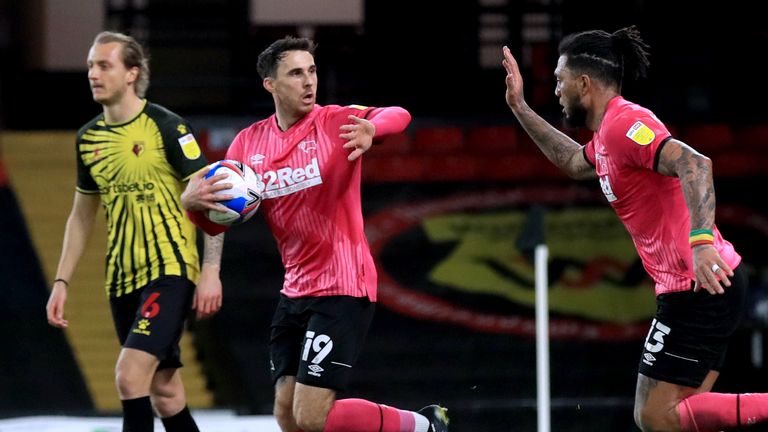 Derby pulled a goal back when a teasing cross was turned into the roof of his own net by Troost-Ekong inside the final 15 minutes and the fact Bachmann mouthed ‘wow’ after he kept out Byrne’s corner at the near post illustrated how close the visitors were to finding the equaliser late on.

Man of the match – Will Hughes

“He was so influential in the game having been involved in the first goal and scored the second. It was another brilliant performance from him.”

Derby are next in action at 7pm on Tuesday, February 23 when they welcome Huddersfield to Pride Park, while Watford travel to Ewood Park to face Blackburn at 7.45pm the following evening. Both fixtures are live on Sky Sports Football Red Button.