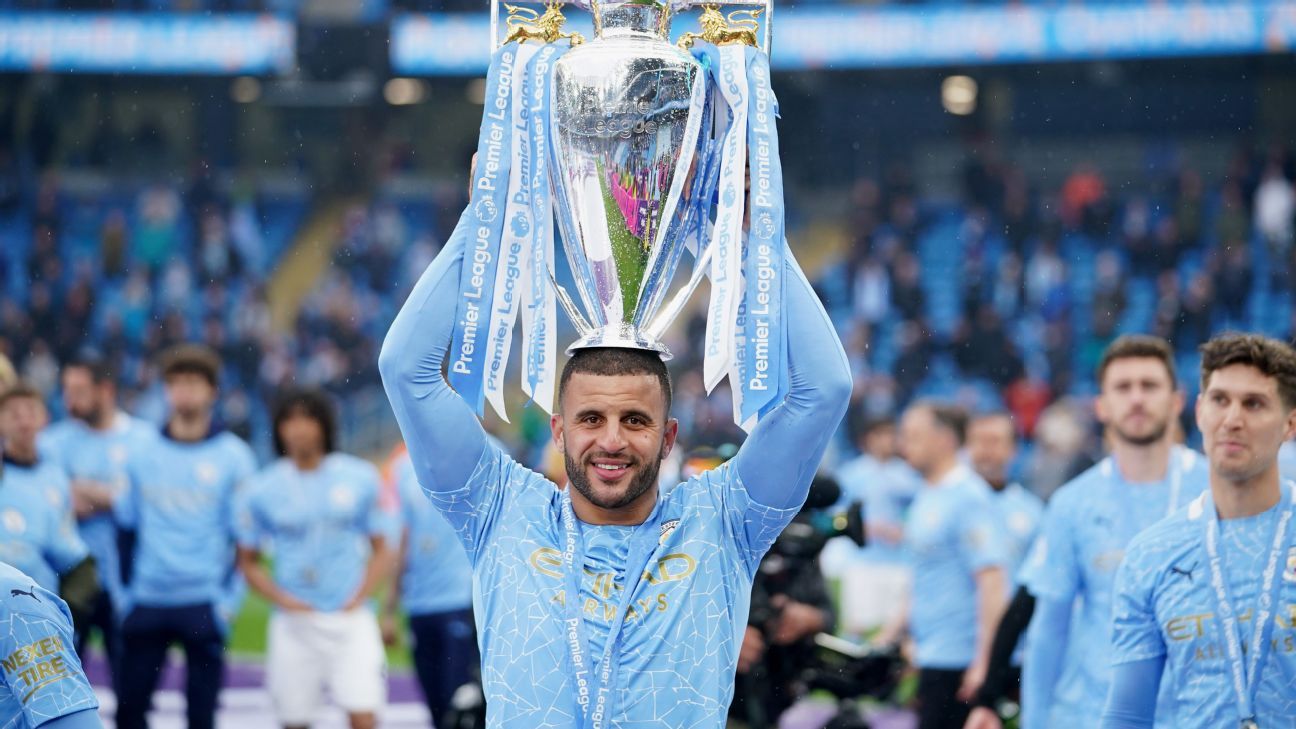 Manchester City’s pursuit of a maiden Champions League success is viewed by many as the club’s holy grail, but Kyle Walker explains to ESPN that the situation is more complicated.

“It’s a question that’s always asked in the changing room: Premier League or Champions League,” says Walker in an exclusive interview with ESPN. “Now, for me, it is Premier League because I’ve grown up watching it. It’s a 38-game slog that you can go to [Leeds United’s] Elland Road where we found it difficult. Or you can go to a beautiful stadium like the Tottenham Hotspur Stadium and find it difficult. Then you’ve got [places as] hostile as Anfield is. Everything’s different.

“Everyone always says, ‘Tuesday night at Stoke’ — you get those games, you have to dig in and get the result. But I’ve been very fortunate. In four years [at City], I’ve won three Premier League medals. The only one I’m missing is the Champions League.

“I think it would just really put the icing on the cake. And as well, maybe [make] people sit back and actually appreciate a little bit more than what they do, how talented this group of players is and what we’ve done over the four years, because I think sometimes, it does go underneath the radar a little bit.”

City face Chelsea in Saturday’s final having already reestablished their domestic preeminence by regaining the Premier League from Liverpool, extending a record of three titles in manager Pep Guardiola’s five seasons at the club. It is his 10th trophy in all with City, comprising four League Cups, one FA Cup and two Community Shields, each one achieved with an enterprising, unique brand of football that earns them a place in pantheon of English football’s greats.

Yet one final hurdle remains: conquering Europe. This weekend’s trip to Porto will be their first appearance in the final; they could become only the 23rd side to win the European Cup if they defeat Chelsea, and the first new name on the trophy since the Blues broke their duck against Bayern Munich in 2012.

“To be recognised as one of the best teams, we do probably need to [win] a Champions League,” admitted Walker. “And I also think for the club as well, for Manchester City, for the amount of money that the owners have pumped into the facilities — not just the players, but the facilities as well — on building this club up to where it is now, we owe it to them as well.

“They’d love a Champions League and for us to finally say that we’ve got one … OK, we’ve made history, we’re in the final now, but for the City fans having Manchester United as your neighbours for so long winning as many trophies as they’ve won over the number of years, it can’t have been pleasant.”

Sheikh Mansour bin Zayed al Nahyan of the Abu Dhabi ruling family has invested around £1.5 billion since buying the club in 2008, transforming the Eastlands area of Manchester around the stadium and creating an elite infrastructure to supplement a lavishly assembled team. The importance of legacy building is apparent to Walker, who moved to Cheshire in 2017 after completing a £50 million move from Tottenham.

“Now I go to the school, I pick up my little boy, everyone’s a City fan,” he said. “Seven years ago, eight years ago, was everyone a City fan? Probably not. They’d probably be Manchester United fans or Liverpool fans. So it’s swinging, but we need to make sure that this success isn’t just short, it just keeps coming and coming and coming. So we can make sure that we’re living up to the expectations and the standards that we set individually and collectively.”

Those standards appeared to slip markedly earlier in the campaign. City dropped to 11th place on Nov. 21 after a 2-0 defeat at Spurs, and following a 1-1 draw at home to West Bromwich Albion a month later, an inquest began.

Walker explained: “Did I believe? Yeah, because of the players that we’ve got. Did I think it was realistic? Especially from last season, where Liverpool went on a run and never seem to lose a game? I didn’t think it was possible.

“He’s got such a good football knowledge that you trust everything he says. So when he said that, I can remember some of the lads coming out and thinking, ‘Not again, like, we can’t not win it again.'”

A remarkable 21-game winning streak across all competitions followed between Dec. 19 and March 6, sending them so far clear of the rest that they still had an 11-point lead when they finally lost again, a 2-0 home defeat to Man United. Gundogan, Foden, Stones and Dias were among those producing sublime performances during this period, but Walker believes veteran 36-year-old midfielder Fernandinho’s role behind the scenes warrants special praise.

“He’s probably not played as much because Rodri has been doing so well,” said Walker. “But off the field, in the dressing room, day to day with us as players making sure that none of us take our foot off the gas and keep wanting to achieve what we can achieve and what we believe we can achieve, has been a really good captaincy role he’s played this year.”

Walker has stepped up in this regard, too. Born in Sheffield, where his parents still live today, he joined Spurs in 2009, initially being loaned back to his boyhood club Sheffield United, Queens Park Rangers and then Aston Villa before flourishing in a career that has so far earned him 55 England caps. There were well-documented lockdown breaches and off-field issues last year, but the trust shown by his teammates increased prior to the start of the season as he was voted onto City’s five-man leadership group, alongside Fernandinho, vice-captain De Bruyne, Gundogan and Raheem Sterling.

“My role in the team has never really been a serious role, as in my personality around the dressing room,” said Walker. “I’m always joking. I’m always laughing. Whenever there’s some banter flying around, it’s ‘OK, Kyle’s done that’ even though I’m not even in the building. ‘That was Kyle, Kyle’s stitched someone up there.’ But I think it’s something that I needed to take into my game being 31 at the end of the month, playing as many games I had and having the experience that I’ve had, maybe it was time for me to pass some of my knowledge on to the younger players.

“Anyone wants to talk to me about anything whatsoever: you can always come and grab a cup of coffee with me and have a chat with me. As much as it might not be believable, I can be serious.”

So much so that captaining City is a target one day?

“I’d love to be captain. I’d love to lead my team out onto the field on a weekly basis,” he continued. “I’d really like that. But there are probably better-suited captains in this team. I like my role in the team now: I like that I can still have a joke, still have a laugh and stitch people up. But if people need me, my phone is on 24/7 if you want to ring me.”

That willingness to take responsibility is a reflection of Guardiola’s growing trust. Joao Cancelo provided fresh competition for Walker at right-back and excelled at times, but Walker has still made 41 appearances this season, starting every Champions League knockout game as City overcame Borussia Monchengladbach, Borussia Dortmund and Paris Saint-Germain to reach a final that has been several years in the making, the team learning from past mistakes along the way.

“The Dortmund one for me was the turning point because in the last couple of years, it’s been Liverpool or Tottenham and we haven’t got past the quarterfinals,” said Walker. “We’ve said in the last three [ties], where it doesn’t matter about the first [leg]. OK, let’s not lose that; if it’s a draw, we’ll back ourselves in the second [leg] to go and get the victory. I think it’s taken us three years to learn that, but three years and we finally got to a final? I’m over the moon.”

And so to Chelsea. Guardiola has amassed 31 trophies during his time with Barcelona, Bayern Munich and City, but it’s been a decade since he lifted the Champions League title, a Lionel Messi-inspired success against Manchester United at Wembley. The Blues have impressed under Thomas Tuchel, but three defeats in their past four matches, including losing the FA Cup final and relying on London rivals Tottenham to secure a win at Leicester City to keep them in the top four, only enhances the sense this feels like City’s time.

“It’s a roll of a dice,” insists Walker. “I don’t want to sit here and sound so confident, like ‘we just need to turn up and go win the game.’ Chelsea are a very, very good team, with a very good manager who has proven tactically he is up there with the best given what he’s done for the club in a short period of time.

“Pep’s way, and our way, is by keeping the ball, but when you get to a Champions League final, the fine details make a massive difference. A lapse of concentration or a set play. We just have to make sure that we’re finely tuned, defensive and offensive on both of them.”

Victory would cement this City team’s place in history, but Walker allows himself a final moment to reflect, pondering how their achievements have perhaps slipped “under the radar.”

“Maybe in five years’ time, we’ll look back and think, or I definitely will look back and think, ‘I was actually a part of that team that went and won 10 trophies in four years?'” he added. “That’s not bad going considering that I’ve been playing from [the age of] 19 and not won anything until I was 27 except a playoff promotion with Queens Park Rangers.”

The next step for Walker and City awaits.