Melbourne Victory coach Kevin Muscat took heart from the battling qualities shown by his 10-man team to fight back and salvage a point in the derby draw with Melbourne City on Saturday night.

Victory will need all of that courage and commitment – and a bit more –  over the next few weeks as they enter one of the most gruelling phases of the A-League season. 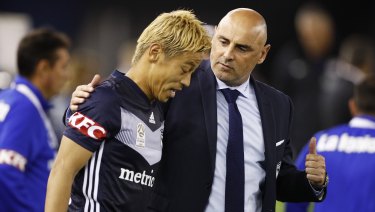 Victory boss Kevin Muscat says there is plenty for his side to achieve in the league.Credit:AAP

In March, the Asian Champions League kicks in and Victory, like Sydney FC, will find the air miles rack up and the fatigue builds as they look to progress in continental competition and on the domestic front, where hauling in runaway league leaders Perth Glory looks an almost impossible task.

Beginning next Saturday night, when they host Newcastle in Geelong, Victory have to play four games in 14 days.

After the Jets match, Muscat's men back up three days later to face Korean side Daegu in their ACL opener at AAMI Park.

Then they must travel to Japan to take on Hiroshima Sanfrecce in a midweek Champions League fixture seven days later before heading home to resume their A-League schedule with a home game against Brisbane Roar.

It will not only test Victory's squad strength but also their mental capacity – an examination they passed with flying colours on Saturday night.

''To go down to 10 men so early and also concede off the same incident, it was a big challenge, it was a big task ahead of us,'' Muscat said.

''I think half-time was really important for us and then from there, I just think a huge positive. The amount of courage and heart that we played with was really good, really nice to watch, really good to be involved in.''

He shuffled his line-up at the break, brought in Ola Toivonen off the bench and the big Swede's class and ability to hold up the ball and into play bring his strike partner, Kosta Barbarouses, paid dividends.

Shortly after the restart Barbarouses gave Victory an equaliser with a shot from an oblique angle that City keeper Eugene Galekovic should have dealt with on his near post.

Although Victory are well behind Glory with only seven games of the season remaining, Muscat is not prepared to concede the title battle is a foregone conclusion.

Victory came from fourth to win the grand final last year and as a result, the coach knows that his team can succeed whatever the odds.

"There's so much to achieve in the next seven games in the domestic competition.

''We've got an opportunity to keep getting better and better and perform at a high level so during those seven league games, that's going to be the objective.''