Melbourne Victory's W-League side have the chance to make history this week by becoming the first Asian women's club champion in a four-team tournament being staged in South Korea.

Jeff Hopkins' side qualified for the inaugural AFC Women's Club Championship by virtue of their table-topping exploits in the W-League last season, although they could not go on to add the championship to their premiership after their semi-finals loss to Perth Glory. 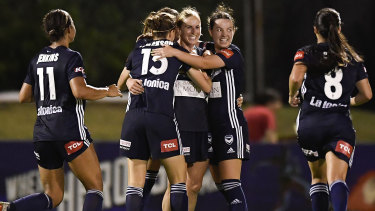 Natasha Dowie (centre) and Melbourne Victory will take on the top clubs of Asia.Credit:Getty Images

Victory's squad depth will be tested in their first foray into continental competition as they play three games in five days, beginning on Tuesday night against Korean champions Incheon Hyundai Blue Steel Angels.

They then follow up on Thursday night against Chinese champions Jiangsu Suning before concluding with a final match against Japanese team Nippon TV Beleza.

The tournament will not only be a test for Victory but will give those participating and running the women's game in this country a benchmark to see where the W-League sits in the region.

The Matildas are one of the strongest women's teams in the world and this will be a chance to see if the Australian league is equally competitive against the best leagues in Asia.

In the men's game the A-League clubs – with the exception of Western Sydney Wanderers, who won the Asian Champions League in 2014 – have struggled against the cashed-up and talented club giants from Japan, China and South Korea.

But Sarah Walsh, the former Matilda who is now head of game development at the FFA and formerly the general manager of women's football, believes that a Victory squad, which includes several top Australian and international players, will be more than competitive.

And, she believes, participation in this competition will only help boost the profile of Australian women's teams and the female game in general.

"It's very important and it's been a long time coming. It's great to see Victory in it," Walsh said.

"We have a strong league in Australia and you are starting to see the A-League clubs starting to leverage their W-League teams and improve them.

"I think Victory will be very competitive. This is a tournament which will grow if FIFA and the AFC invest in it. We have seen the impact of the UEFA Champions League, with some of the top female players in the world, including Sam Kerr, move to European clubs because the lure of playing in a tournament like that is very strong."

Drew Sherman, who is the technical director at Victory, oversees both teams.

Victory has taken its whole squad to South Korea although it can only play three foreigners – in this case English striker Natasha Dowie, American defender Emily Menges and her countrywoman, midfielder Hayley Hanson – in each game.

"It's a very tough schedule and it's going to be a real test of our depth because we have restrictions on availability," Sherman said.

"The three teams we play against have got quite a high proportion of players in their national team. The Korean teams have got 10 women who were at the last World Cup. Their domestic leagues tend to retain more of their players than ours, where we see so many of the Matildas playing in America or going to Europe now.

"But we will use the tournament to have a look at some of the younger women in our squad as well. It will be a great experience for them and help them mature and develop as players as they will be exposed to tough competition with little recovery time."

Victory have travelled in a positive frame of mind after winning their last W-League match against Brisbane Roar 3-2, with Dowie netting twice.

INCHEON HYUNDAI STEEL RED ANGELS have been a powerhouse of the Korean women's game from virtually the moment the WK League began in 2009. They have won the championship play-off for the last seven seasons and have lost just once in their last 56 regular season games.

NIPPON TV BELEZA are giants of the Japanese game, winning 17 league titles in 30 years, 14 more than their nearest competitors. Nine of their squad were in the Japanese contingent at the Women's World Cup in France. They have won the Japanese competition for the past five years in succession.