Melbourne Victory has confirmed that it is bolstering its defence with the signing of German centre-back Tim Hoogland, who once scored against Real Madrid at the Bernabeu in a Champions League game for one of his previous clubs, Schalke.

Victory have also re-signed centre-half James Donachie, who won an A-League Premiership medal as part of the Victory side that beat Newcastle Jets in the 2018 grand final.

Reports earlier this week suggested both players were expected to join the club. 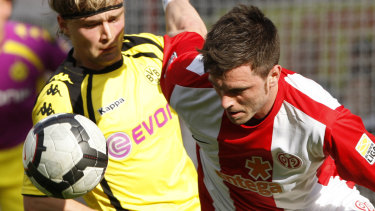 Got their man: Victory have signed German defender Tim Hoogland (right), seen here playing for Mainz in the Bundesliga. Credit:AP

Hoogland signed from German side VfL Bochum on a one-year contract, while Donachie formally returns on a one-year deal following a loan from Korean side Jeonnam Dragons.

Hoogland played last season in Germany with another returning Victory player in Robbie Kruse, the Socceroos forward who was part of the Victory line up from 2009 to 2011.

"I'm excited to join Melbourne Victory and by the new challenge that awaits me in Australia," Hoogland said in a club statement.

"I've heard great things about the club and about the A-League, and with Robbie and Marco (Kurz, Victory's new coach) there too, I will definitely feel at home."

Donachie represented Victory on 62 occasions across all competitions in his previous spell, and is looking forward to rejoining.

"I've played some of my best football with Melbourne Victory, and I feel like I still have plenty more to offer," he said.

Kurz said the signings would bolster Victory's defence as well as provide leadership for the club's emerging players.

"Tim is a solid and fast centre-back and James is a player with great quality and respect here at Victory," the coach said.

"Both players will strengthen our defensive unit and provide valuable insights for our younger players to learn from, and also great support for our more established players."