The clock is ticking towards transfer deadline day and there is still plenty of business to be done in the Premier League and beyond. The top teams have already splashed out millions on new acquisitions – but don’t expect that to stop any time soon, with the rumour mill still very much in full swing.

Manchester United continue to fill the lion’s share of the column inches, with the Red Devils desperately searching for options to bolster Erik ten Hag’s quite clearly inadequate squad. Atletico Madrid star Joao Felix and Real Madrid midfielder Casemiro are among the latest names to be linked, and who knows if there will be any further developments today.

Chelsea, meanwhile, are another team who want to make at least one or two new signings. Will the likes of Wesley Fofana, Frenkie de Jong or Anthony Gordon move closer to a switch to Stamford Bridge in the coming days?

And with Liverpool, Arsenal and Tottenham also set to monitor the market until the final day, expect plenty more twists and turns in this most fascinating of transfer windows. 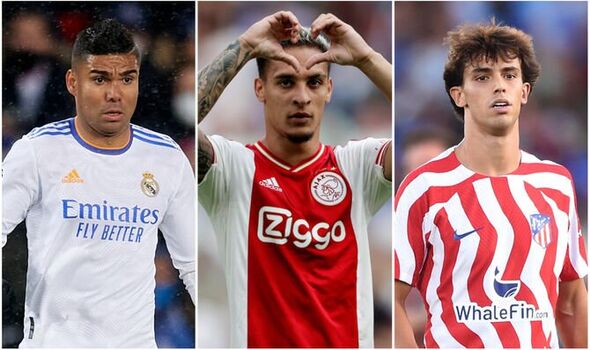 Casemiro emerged as a target for the Red Devils earlier this week. A move for Adrien Rabiot fell through during discussions over personal terms, so Erik ten Hag is in the market for another midfielder.

But 90min claim that Chelsea actually have a long-standing interest in the Brazilian and are considering a move before the end of the window. The report says signing a player of Casemiro’s style has been a priority for Thomas Tuchel.

Manchester United are ready to bring their interest in Ajax winger Antony back to life and make a blockbuster approach for Erik ten Hag’s priority attacking target. The Red Devils are set to launch their final push for Antony in the coming days amid a dramatic end to the summer transfer window.

United had hoped to reunite Ten Hag with the 22-year-old earlier this summer, after their successful relationship in the Netherlands. However, Ajax inflated their asking price from £68million to £84m to signify that he wasn’t for sale after losing several other key first-team stars.

But just as United’s pursuit was seemingly dead and buried, there could be hope for Ten Hag and supporters. According to Sky Sports, the club are back in for Antony and will present a ‘massive offer’ to Ajax this week.