Mauricio Pochettino does not think it would be embarrassing if Tottenham were knocked out of the Champions League at the group stage ahead of their crunch clash with PSV Eindhoven.

Spurs realistically have to beat PSV at Wembley on Tuesday if they are to have any chance of extending their stay in the competition until after Christmas, with games against Inter Milan and Barcelona still to come.

They have managed just one point at the halfway point of the group stage – which came in Eindhoven in the reverse fixture a fortnight ago – but Pochettino would not be ashamed if his side were knocked out in the coming weeks.

“When you compete at that level against Inter Milan or PSV, of course Barcelona, it is not easy to go to the next stage of the Champions League and qualify,” he said.

“If you don’t deserve to go, it’s disappointing but not embarrassing. We all feel disappointed because we cannot deliver the possibility of playing the Champions League in our new stadium, but it wasn’t in our hands, there were many things that complicated it. It is impossible to blame the club.”

PSV coach Mark van Bommel knows Tuesday’s Champions League encounter with Tottenham will not be easy, with both teams chasing their first Group B victory.

He said: “It won’t be an easy game, it is a must-win for Spurs but if we want to do something as well we have to win as well. Both teams will want to win, so let’s enjoy.

“If you are thinking about the pitch then it is not good. You have to prepare and that is it. You cannot complain, you cannot change the situation. I played here with Holland against England, we won, that’s a very good memory. It’s the history of football so everybody loves to play at Wembley.”

Mousa Dembele is Tottenham’s latest injury concern. The Belgium midfielder suffered an ankle injury in the 3-2 win at Wolves on Saturday and is awaiting the results of a scan. 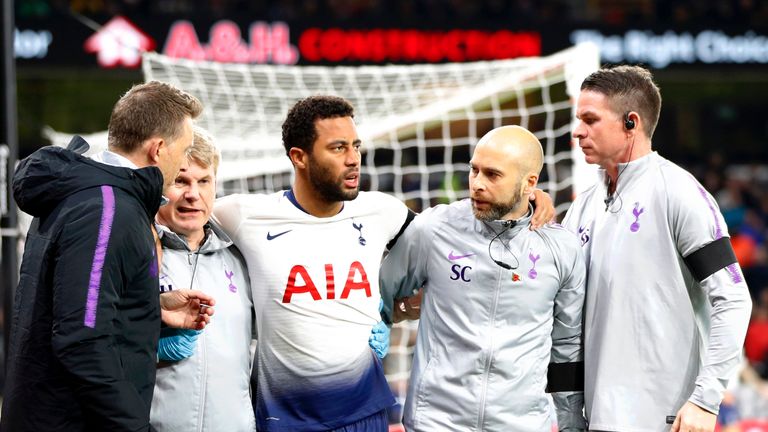 PSV have won none of their last 11 Champions League matches (D5 L6) since winning 2-1 against CSKA Moscow in December 2015.

Spurs striker Harry Kane has the best goals per game ratio of any player in Champions League history to play at least 10 matches in the competition (0.85 – 11 goals in 13 matches). Only Red Star Belgrade (75) have faced more shots in this season’s Champions League than PSV (69), with the Dutch side facing at least 20 in each of their three matches.

Three of the five English sides to achieve just one point or fewer from their opening three Champions League group stage games went on to qualify for the next round – Newcastle United in 2002-03, Arsenal in 2003-04 and Liverpool in 2007-08.

None of Spurs’ 10 home Champions League group stage matches have ended as draws – they have won seven and lost three.