After hosting three NFL games in a fortnight, the Wembley turf has been ravaged ahead of Tottenham’s huge clash with Manchester City.

Grounds staff have a mammoth task on their hands to nurse the iconic surface to a playable state with only 24 hours between the Jacksonville Jaguars’ defeat by the Philadelphia Eagles and Monday night’s Premier League showdown.

The average weight of an NFL player is 17.6 stone. These behemoth’s wearing cleats designed to dig into the turf have cut up the pitch and the top layer of green has been worn away down to an ugly brown. 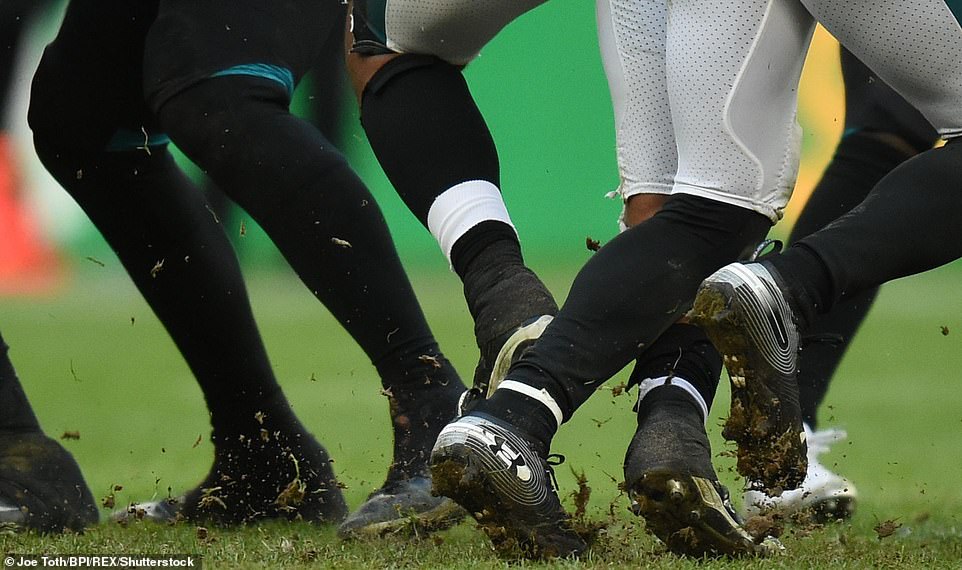 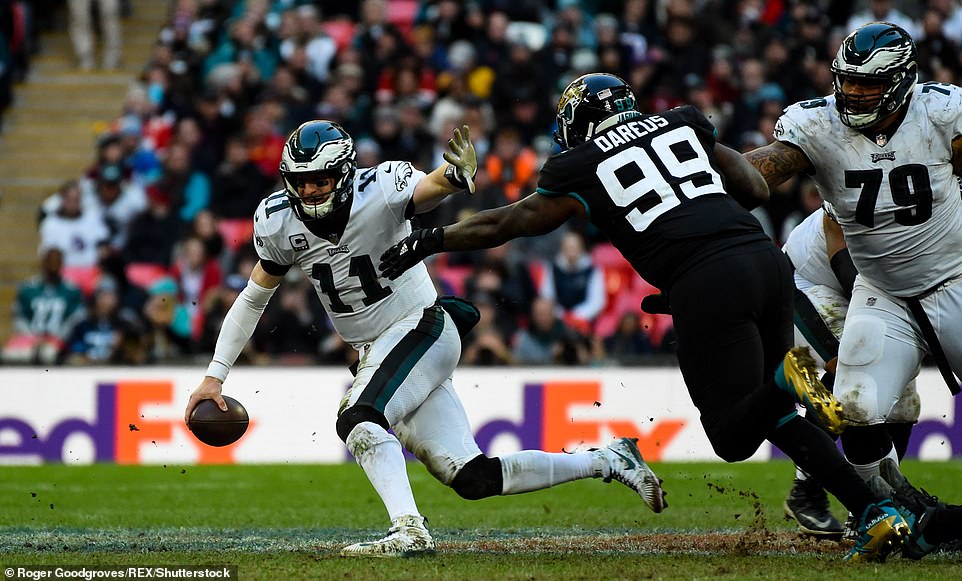 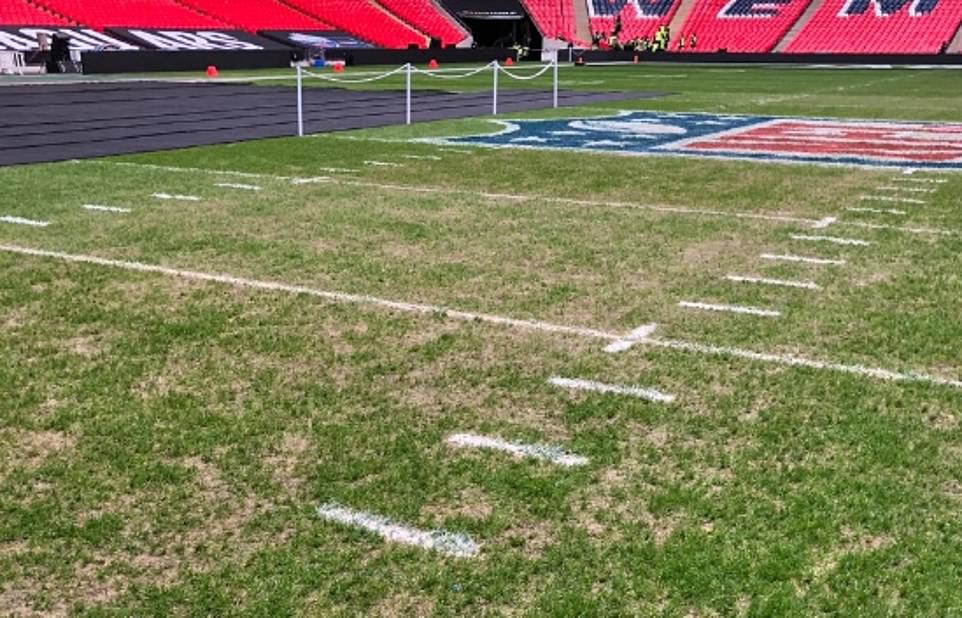 The formerly velvety green surface has been worn away to a patchy brown colour, particularly down the centre

Down the centre of the field, where the line of scrimmage sets down on every play, the damage is at it’s worst.

Offensive linemen require the ability to steady themselves and grip the ground to protect their quarterback and the constant twisting, turning and hammering of the field has parts of it looking like a day five Test cricket surface on the subcontinent.

Mooen Ali would be licking his lips at the prospect of bowling into some of the dry areas and footmarks. Pep Guardiola and Mauricio Pochettino’s slick footballing sides won’t be quite as enamoured.

Staff at the national stadium will be working around the clock to not only attempt to revitalise the turf, but also remove the extensive yard markings and huge NFL logo emblazoned where the centre circle will be on Monday evening. 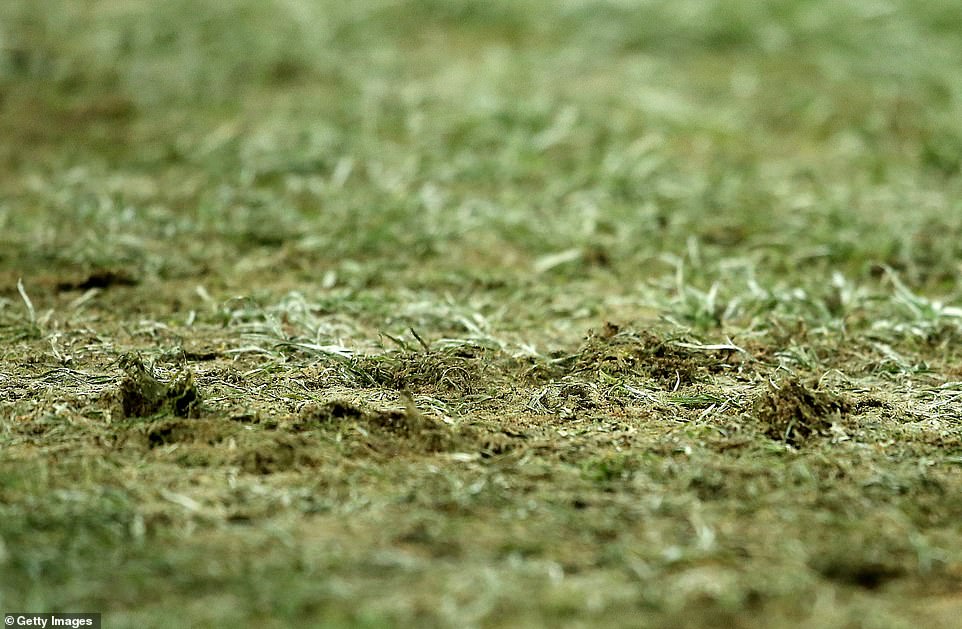 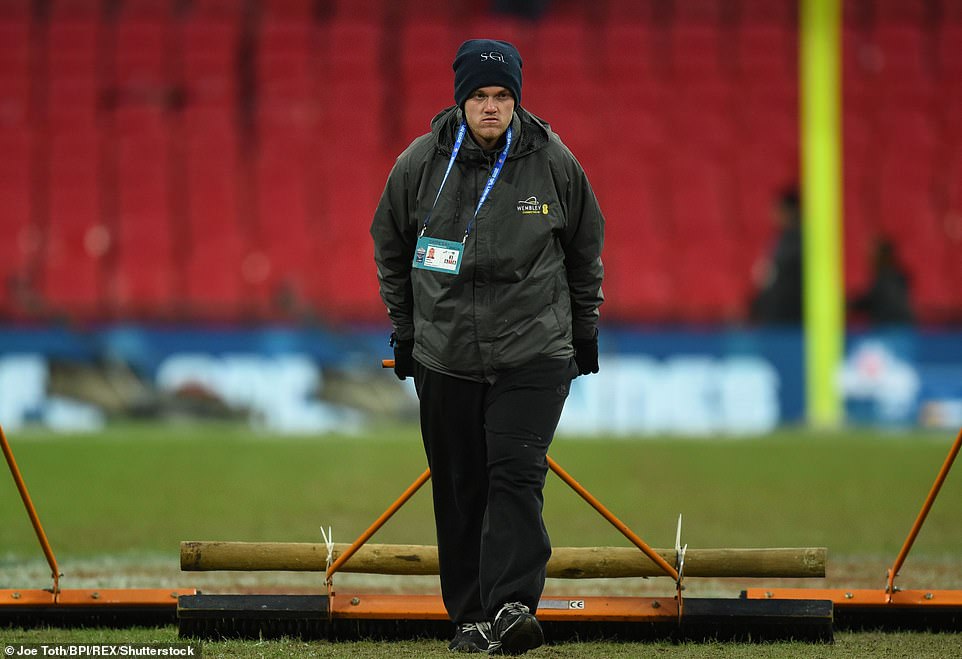 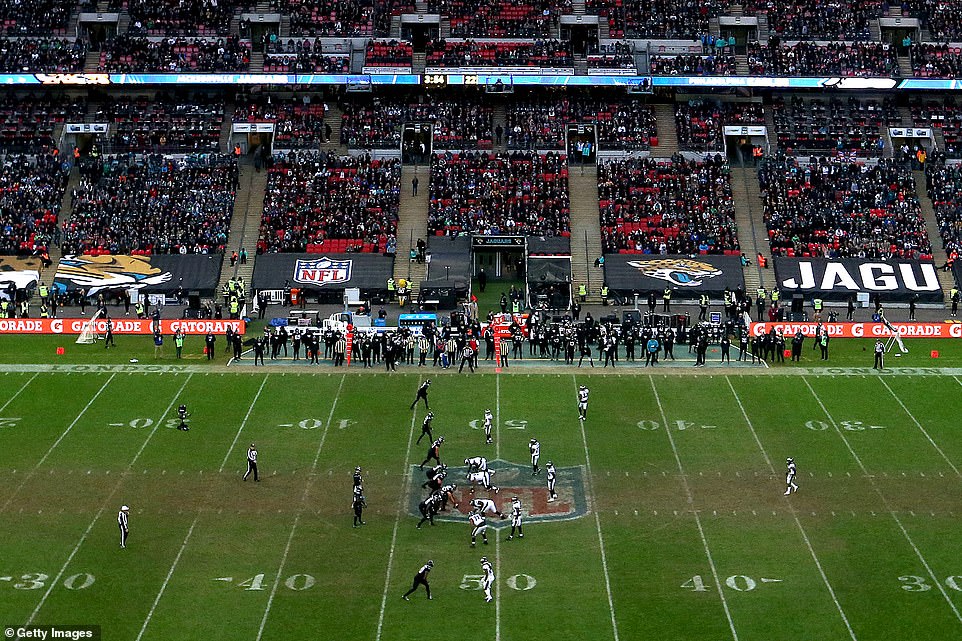 A close inspection shows loose grass and dirt laying on top with distinctive stud marks littering where the pristine green carpet used to be.

The work to repair the damage started almost as soon as the Jaguars’ game against the Eagles on Sunday reached a 24-18 conclusion in favour of last season’s Superbowl champions.

Wide brushes being dragged behind groundsmen were the first instrument called upon to sweep the more hefty clumps of loose debris off the ground.

No doubt there will be an array of tools used to revive the pitch but it remains to be seen how much of the damage is simply irreparable in 24 hours.

The operation to salvage the Wembley pitch before tomorrow night’s game is underway. pic.twitter.com/MvOlFmWuHd 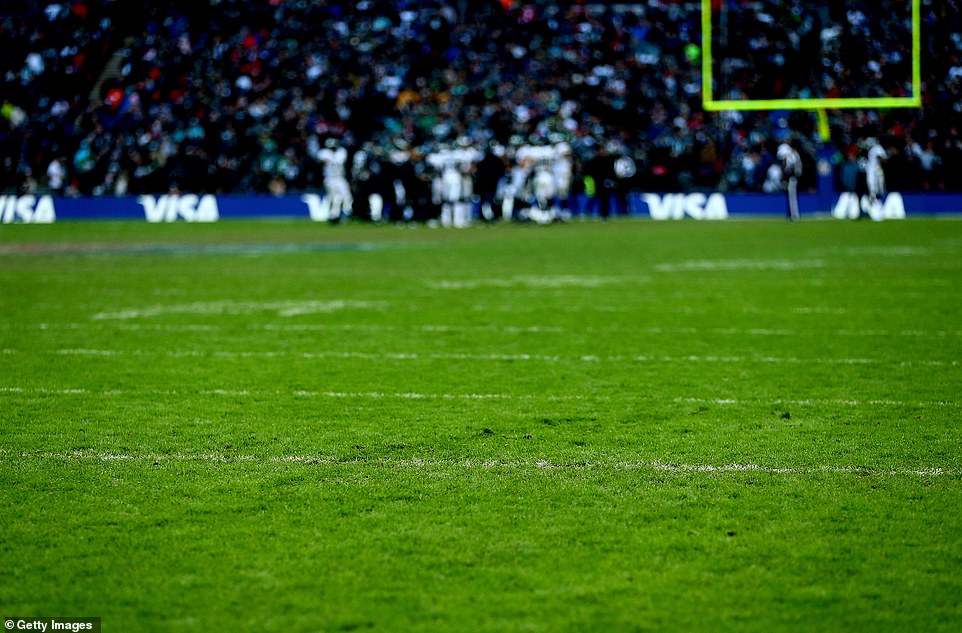 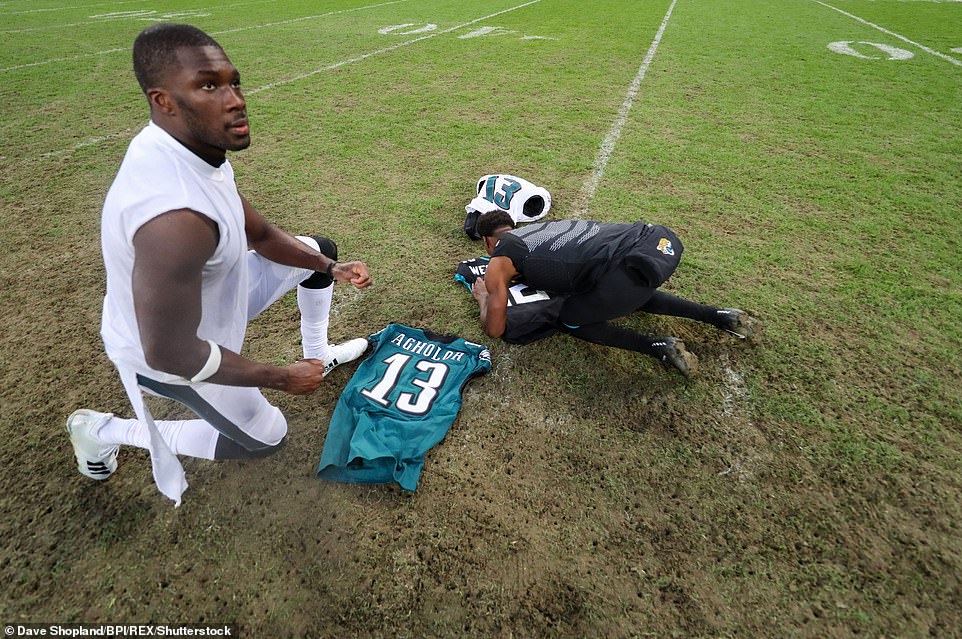 Delays to the construction of Tottenham’s new stadium mean that Spurs won’t entertain fans in their new home until 2019.

Given the unforeseen extended tenancy at Wembley, they have been forced to slot in around the packed NFL schedule and as a result, have to deal with the lumpy ground to play on.

Jacksonville Jaguars duo Josh Lambo and DJ Chark warned City and Spurs players of what to expect. ‘It might be challenging, definitely right after a game, with us guys tearing it up. It’ll probably be difficult,’ said Chark.

Lambo added: ‘It’ll be difficult for Pep Guardiola’s side to play their style of football (after we’ve played on the pitch), the way that they want to play.’

Kevin de Bruyne raised concerns about the conditions and the way a slow, uneven surface could hamper his side’s football.

‘It’s going to be difficult. I’m not sure how it’s going to be. We hope it will be OK and we can play like we normally do. These games are the most important ones. A big game. We have to go and show our intent to stay on top,’ he said. 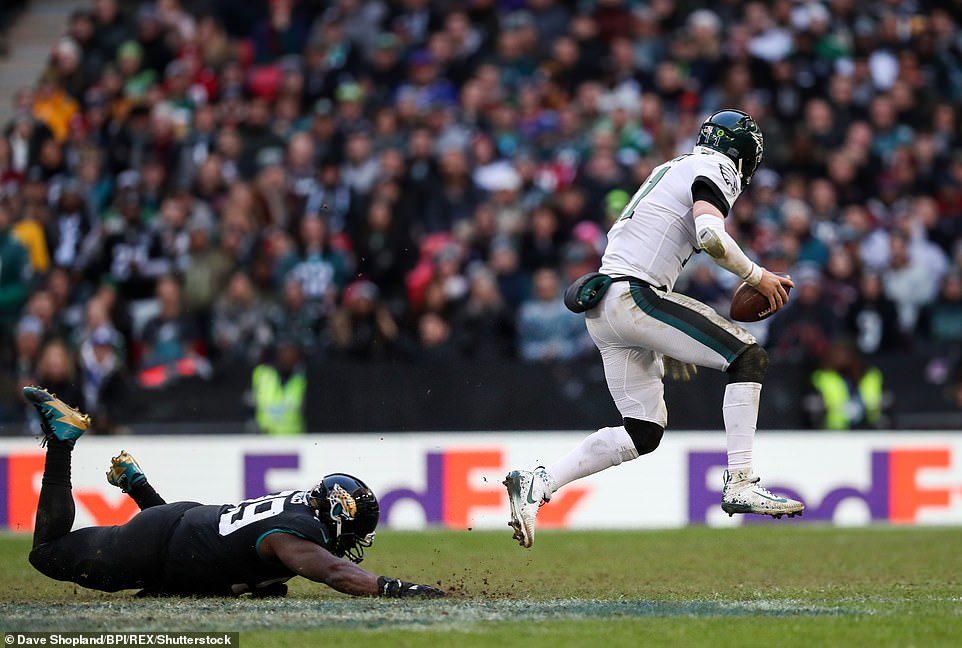 But Guardiola is keen to ensure the Premier League champions have no excuses and insisted the worn-down Wembley is not a concern.

He allayed fears that the pitch might lead to injuries, ‘We have full focus on what we have to do to avoid injuries. When you take care properly and focus, knowing that the pitch may not be in the best question, you have to be ready.

‘It is what it is. I’m pretty sure Tottenham have a good greenkeeper. There’s no point complaining, we have to adapt.’

Time will tell whether the nips and tucks of Wembley’s 24 hour face-lift will render the game a slug-fest or not.