Jose Mourinho turned to his old foe Pep Guardiola and smiled at the sound of the final whistle.

Just over 12 months on from his arrival, the Portuguese had witnessed his Tottenham side produce one of his trademark performances to secure a 2-0 home win over Manchester City and send out a message in the Premier League title race.

Counter-attacking goals in each half from Heung-Min Son and substitute Giovani Lo Celso handed Spurs a statement victory despite Pep Guardiola’s men dominating possession in the capital.

So was this another Mourinho masterclass?

Harry Kane didn’t have a single shot but he won six fouls for his team, laying on the assist for Lo Celso’s crucial second to give the hosts breathing space.

“Kane is messing with them. He has been spectacular,” Gary Neville purred on commentary for Sky Sports. “Kane has got both centre-backs where he wants them. He’s playing with them.”

On his role in Tottenham’s second, Neville added: “This is a classic Jose Mourinho performance. A wonderful touch and turn from Kane. Brilliant for Spurs, a nightmare for City.” Pierre-Emile Hojbjerg was everywhere on the evening for Tottenham. Guardiola played a pivotal role in the Denmark international’s development following their time together at Bayern Munich – where he became the youngest player to play for the Bavarians in the Bundesliga as a 17-year-old.

But Hojbjerg eventually fell out of favour at the Allianz Arena, being loaned out to first Augsburg and then Schalke before being sold to Southampton for £12.8m in July 2016 as Guardiola himself departed for City.

Now 25, the defensive midfielder is emerging as a vital cog in Spurs’ rise under Mourinho, his renaissance mirroring his manager. With 30 of his 32 passes completed, Hojbjerg proved a point to his former boss. 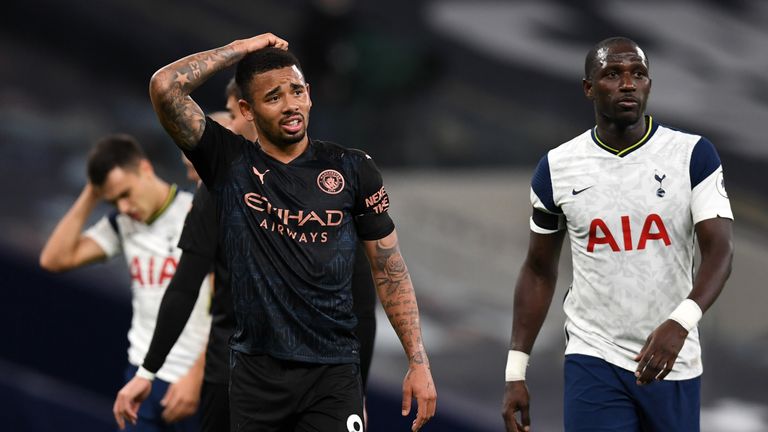 Here was further evidence of City’s decline in attacking output this season. Guardiola’s men have scored just 10 goals in eight Premier League games this season – at the same stage of last term, they had scored 27.

“I thought City played well in the first half,” Neville told Sky Sports. “In this half, they haven’t played well. It’s been ragged.”

While the defence has improved since the arrival of Ruben Dias, Sergio Aguero’s return to full fitness cannot come soon enough. Gabriel Jesus managed nine touches in Tottenham’s penalty area, but none of his four shots were on target.

“The reality is so far we didn’t score much, and that’s why we struggle to score goals,” Guardiola said.

A case of deja-vu for City? Back in February before lockdown, City were also beaten 2-0 by Tottenham here with 67 per cent possession. This time, Guardiola’s men had 66 per cent of the ball, and yet were on the wrong end of the same outcome.

But this felt different. That result lifted Spurs up to fifth but they are much-improved since then. Guardiola sounded resigned from the start, so are Tottenham now genuine title contenders?

“I doubted it a few weeks ago,” Neville said. “I’m not going to change from that. But they are certainly gaining in confidence and this was a really good performance.

“In the first half it was resilient and the Mourinho of old. In the second half, they were just better than City.”

Curiously, 41.3 per cent of Tottenham’s first-half attacks came down the right through the marauding runs of Serge Aurier.

But Mourinho flipped that in the second period with 40.6 per cent coming down the left through the indefatigable Sergio Reguilon as Spurs looked to exploit the space behind Kyle Walker as he increasingly committed himself going forward with City seeking a route back into the game.

Here was further indication of Mourinho’s return at the sharp end of the game. In overcoming his old nemesis, this was Mourinho playing on City’s weaknesses, hitting his opponents on the counter-attack. 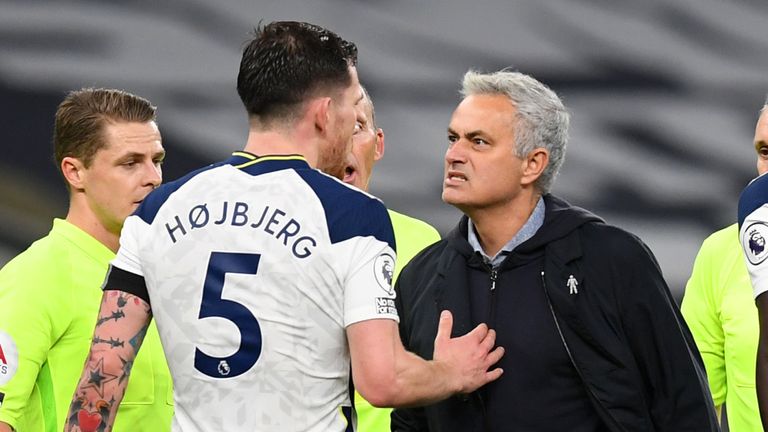 It’s not the brand of football that Spurs fans have come to associate with their club down the years, but will they care if Mourinho can once more earn silverware in his second season?

“Spurs have had some great teams over the years, seen great footballers, beautiful footballers, but they’ve not won a thing,” Jamie Redknapp told Sky Sports.

“If Spurs fans have to take watching that style to win trophies, they will take that. Mauricio Pochettino built a lovely team – what did they win? Zero. I wasn’t sure Jose Mourinho could do it at Spurs but he makes players work so hard. It’s unbelievable how hard Harry Kane and Son Heung-Min work without the ball. Spurs did so well without the ball – it was a masterclass from Jose and the team.” Can you have an invisible assist? It was Kane’s movement in sucking two City defenders out of position for Son to take Tanguy Ndombele’s pass to slot home after five minutes.

City became the latest team to struggle to get to grips with the England captain’s movement, with his heatmap indicating his positional play more as a central midfielder than as a striker, dropping deep to outnumber City in midfield.

Kane had as many duels (14) as Hojbjerg while he even made more tackles than any other player during the first half.

Tottenham now host Ludogorets in the Europa League on Thursday at 8pm, before going to Chelsea next Super Sunday at 4.30pm, live on Sky Sports Premier League.

Man City are at Olympiakos in the Champions League at 5.55pm on Wednesday, before hosting Burnley in the Premier League at 3pm on Saturday.