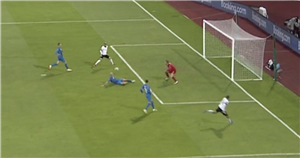 Chelsea forward Timo Werner may have found the net against Iceland on Wednesday evening – but the blunder that preceded his goal is sure to capture just as much attention.

The former RB Leipzig forward has struggled in front of goal since leaving the Bundesliga for the Premier League, managing just six strikes across 36 league outings.

While those numbers pale in comparison to his Leipzig return of 78 goals from 127 league appearances, he has remained in the Germany side under new boss Hansi Flick.

Having been named in the starting line-up against Iceland on Wednesday, Werner did manage to get on the scoresheet and create another in the 4-0 win, but also miss a sitter.

With the away side going ahead through the prolific Serge Gnabry, Chelsea's Antonio Rudiger grabbed a second following a Joshua Kimmich free-kick.

Going into the break 2-0, Werner had a golden chance to make it three after the restart, but couldn't beat the keeper from a one-on-one before Leroy Sane found the net.

Werner was then given another great chance to score, but missed the target from just outside of the six-yard box with an open goal to aim at after a cross from Lukas Klostermann.

With just two minutes of normal time remaining, Werner got his goal after Kai Havertz left him with only the keeper to beat, his shot striking the post and narrowly crossing the line.

Will Chelsea win the Premier League this season? Let us know in the comments section

Although he did find the net, Chelsea will need to have a more regular goalscorer if they want to win the Premier League title, and look to have done so in Romelu Lukaku.

Tuchel said earlier this season: "I truly believe that this can be a big upgrade for [Werner].

"Having the attention on Romelu, who likes to be in the centre of the pitch and to fight physically with defenders, can create space for Timo.

"[With] the position, he can play a bit wider than he used to play for us last season.

One fan wrote on Twitter: "He lost a lot of confidence, a top striker always needs confidence."

With a second adding: "How many times is he gonna do this. Feel sorry for him."

With a fourth adding: "If he’d just kept running straight it would have bounced off him into the net."