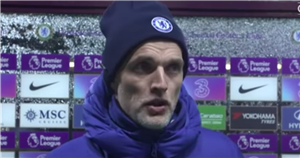 Thomas Tuchel may be aware that he needs to move one of his Chelsea attackers on in the summer transfer window after admitting that Christian Pulisic didn't deserve to be left on the bench in Monday's win over Newcastle.

Tuchel has got off to a dream start since replacing Frank Lampard in the Blues hot-seat last month, winning five of his first six matches and keeping as many clean sheets.

The German has made a number of intriguing tweaks to Lampard's system, shifting from his predecessor's preferred 4-3-3 to a 3-4-2-1 formation and reintroducing ostracised stars Marcos Alonso, Kepa Arrizabalaga and Andreas Christensen.

He has also used Callum Hudson-Odoi at right wing-back on several occasions, while snubbing N'Golo Kante in the centre of midfield for a Jorginho and Mateo Kovacic partnership.

Zouma already appeared to have lost his place at centre-back to Antonio Rudiger before Lampard's sacking, while Chilwell has still been afforded two starts in Tuchel's first five league games.

Ziyech, on the other hand, has not featured since starting Tuchel's debut match against Wolves.

Pulisic, too, has fallen out of favour since his arrival and is yet to start a league game under the new head coach.

The two outcasts, who both operate primarily as wingers, were unused substitutes in Chelsea's 2-0 win over Newcastle on Monday night.

Pulisic's lack of game time comes as more of a surprise given he previously worked under the 47-year-old at Borussia Dortmund.

And when asked about his absence against Newcastle, Tuchel said: "It was a tight decision if he started or not.

"Unfortunately we only had three changes, which makes it very difficult for the players and what they might deserve. He deserves to start, he deserves to come in."

Tuchel's admission that Pulisic was left on the bench despite deserving to come on shows he is dealing with a bloated attack in west London.

With Mason Mount, Timo Werner, Kai Havertz and Hudson-Odoi seemingly ahead of Pulisic and Ziyech in the pecking order, he may need to offload at least one of the latter pair when the summer transfer window opens.

Get the latest football news straight into your inbox!

Ziyech only arrived at Stamford Bridge for £36million last summer and, due to a series of injuries and his current struggles under Tuchel, has racked up a mere 11 Premier League appearances.

As for Pulisic, he has scored 13 goals in 55 games for Chelsea since sealing a £58million move from Dortmund in 2019.

READ MORE:Thomas Tuchel needs to weave magic on Chelsea's Kai Havertz like he has Timo Werner