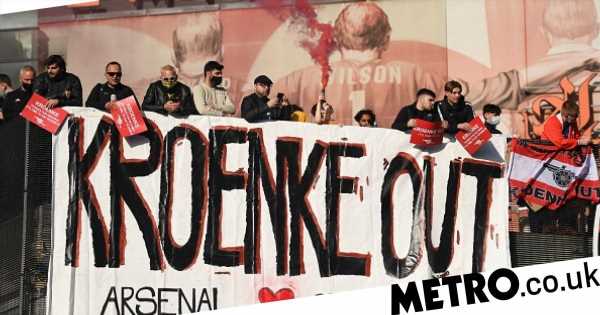 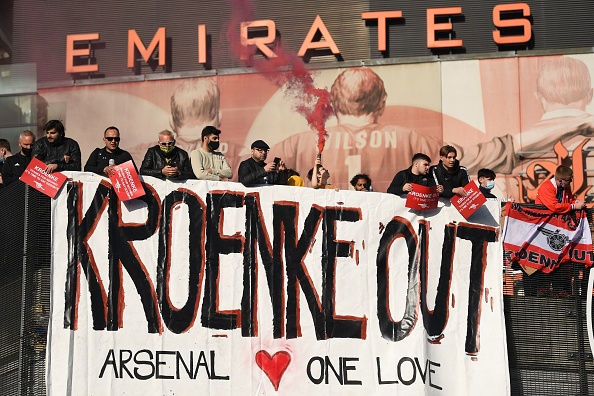 Thierry Henry confessed he hardly recognises the club he still adores following a tumultuous week in Arsenal’s history which culminated in Friday night’s protests outside the Emirates Stadium.

Arsenal’s decision to join the aborted European Super League was met with widespread condemnation earelir this week and their subsequent decision to withdraw has done nothing to appease an increasingly disgruntled fanbase.

Josh Kroenke, son of majority shareholder Stan Kroenke, along with chief executive Vinai Venkatesham, apologised to a group of supporters during an online fans’ forum Q&A session on Thursday but that did little to restore their tarnished reputations.

Fans descended on the Emirates last night en masse ahead of a 1-0 defeat against Everton and protested against the owners and even went as far as hanging an effigy of Stan Kroenke.

Responding to the unprecedented scenes, Henry, the club’s all-time record goalscorer, told the Daily Telegraph: ‘This club belongs to the fans, I love the club and I will support the club until I die, but I do not recognise my club and what happened just now, with them trying to join a league that would have been closed, makes no sense to me.

‘They have been running the club like a company, not a football club, and they showed their hand. Maybe it’s a lack of understanding of the core football values and maybe the money was too big of a temptation. But whatever it was, they got it wrong. Badly wrong.

‘I was genuinely shocked like most people and couldn’t believe what was unfolding. I have never talked before, but what happened recently made me realise fans, this is your club. It is your club and I’m an Arsenal fan too. I’m proud of what the fans achieved. Not just Arsenal fans, all the fans. The result was a victory for football.’

On the damage caused by joining forces with 12 rebel clubs and forming a breakaway competition, Henry added: ‘I remember when I arrived, not the Tottenham fans or our rivals, but a lot of the time I used to hear, ‘My second team, if I had to pick one, is Arsenal’, because of the history, the culture, the class, the family.

‘But I don’t hear that or see that anymore and it pains me. We need to get that image back. We need our identity back.’