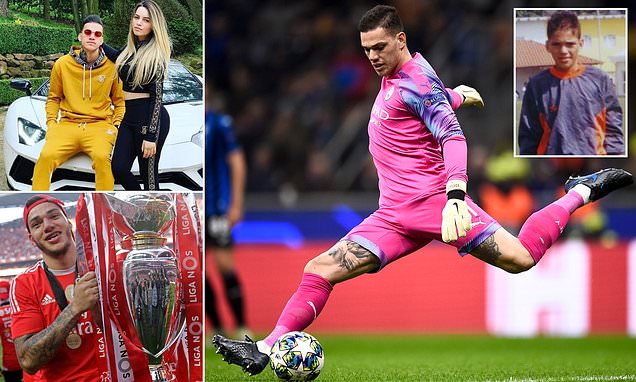 The rise of Ederson the kicking king: Man City goalkeeper has gone from a failed left back nicknamed ‘DUCK’ due to his waddle… to pass master on the brink of Champions League glory – SPECIAL REPORT

In Brazil, the undisputed master of those goalkeepers who look good on the ball considers the impact of Ederson at Manchester City.

‘A modern goalkeeper,’ says Rogerio Ceni, who scored an astonishing 131 goals during a 23-year career in goal at Sao Paulo, mostly from free-kicks and penalties. He is now manager of Flamengo, where last year he won Brazil’s Serie A title.

‘When it comes to passing, Ederson is the most complete goalkeeper of the Brazilians, if not the world. Short pass, long pass, you name it. City, of course, have Kevin De Bruyne and midfielders that help the fluency of the game, opening spaces, but the beginning of a lot of plays is built by Ederson. He is fundamental to the City scheme, and has a coach who motivates him, making him part of the game in long and short passes. 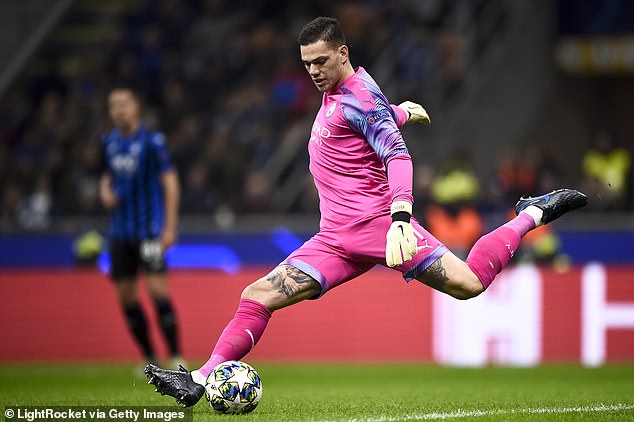 It wasn’t an easy ride to the very top for Ederson, who is now on the brink of European glory

‘The short pass is essential and the grass is good, which makes it easier to look at the game, with head up, not at the ball. And Ederson has the virtue of the long pass because he is very strong. When opponents move up to create an offside line, he can kick it 15 metres behind and create a counter-attack.’

The long ones do catch the eye. In the Champions League semi-final second leg against Paris Saint-Germain, his precision delivery for Oleksandr Zinchenko created a goal for Riyad Mahrez.

Against Tottenham in the Premier League, one pass sliced the game in two for Ilkay Gundogan. He may not have the prolific goalscoring ratio of his hero Rogerio, but Ederson has redefined goalkeeping in Europe. 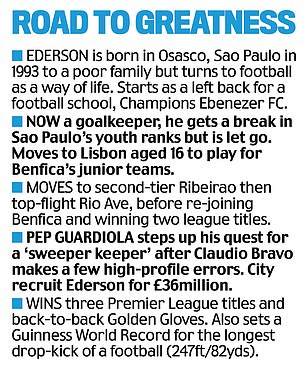 Few Brazilian boys grow up dreaming of being a goalkeeper and Ederson was no different.

He was a budding left back when he turned up to play on the orange dirt pitch of Champions Ebenezer, a club founded by ex-professionals Gilberto Lopes, known as Giba, and Ozias Matos, to keep boys off the streets and out of trouble in the municipality of Osasco, in Sao Paulo.

Ederson displayed a powerful left foot but had little else in his favour, according to Giba, who died last year, after suffering Covid-19.

‘He was a bit clumsy and I sent him to play in goal,’ said Giba in 2017, in an interview with the Brazilian news website UOL. ‘He didn’t like it much but he closed the goal and soon we realised he had natural talent.’

Ederson warmed to the role, tapping into ability he never knew he had, and soon came to the attention of Toninho Rodrigues, a Sao Paulo coach.

‘I saw him practise at Ebenezer on Saturday and by Tuesday he was training with Sao Paulo,’ says Toninho. ‘We called him “Gordo” (fat) because he was very skinny. You could see his bones. He was very quiet and humble.’

Ederson continued to learn his craft at the club where Rogerio was a hero and the legendary goalkeeper dropped in one day after training to talk to the kids in Toninho’s team.

In 2005, when Sao Paulo beat Liverpool in Yokohama to become club world champions — and Rogerio scored 21 goals in all competitions — Ederson travelled to Japan with the club’s Under 12s for a tournament in Shizuoka. 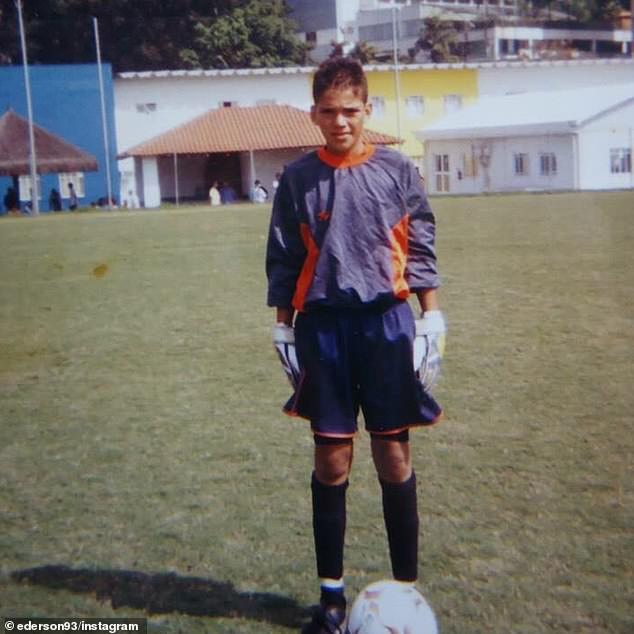 All of this was an inspiration for a young keeper keen to display how gifted he was with a ball at his feet.

But the dream ended abruptly when the teenager was released without warning, via a phone call to his mother. ‘I cried a lot,’ said Ederson. ‘I spent a month away from football.’

‘It was hard to understand and lacked humanity to send him away like that,’ he tells Sportsmail. ‘I still get sad today, thinking about it. Ederson was so humble and it probably ruined his expectations. I couldn’t call him. I was ashamed.’

Ederson was back training with Giba and Ozias in Osasco when Toninho heard Benfica’s scouts were scouring Brazil in search of a good, young goalkeeper. He told them to go and take a look at Ederson. ‘I knew Gordo would still have his chance,’ says Toninho. ‘Maybe it worked out for the best because it pushed him to become what we see now.’

In Portugal, the coaches tried to add positional sense and tactical awareness to Ederson’s natural gifts and Brazilian technique.

‘He was very calm,’ says Paulo Marques, a goalkeeping coach at Benfica since 2007. ‘That stood out. The world could fall around him and he would be OK. He was taller than the other boys. Very confident. Great strength, with a good, long pass. One game against Braga, he kicked the ball from his box, strong, very strong, we watched as the ball crossed the whole pitch… Goal!

‘He wanted to be like Rogerio Ceni, his idol. He’d like to score goals, take free-kicks and penalties. We helped him but we were worried. We couldn’t let him go up and down the pitch 10 or 15 times in a game. We had to keep him behind bars so we didn’t make him our official free-kick taker.’ 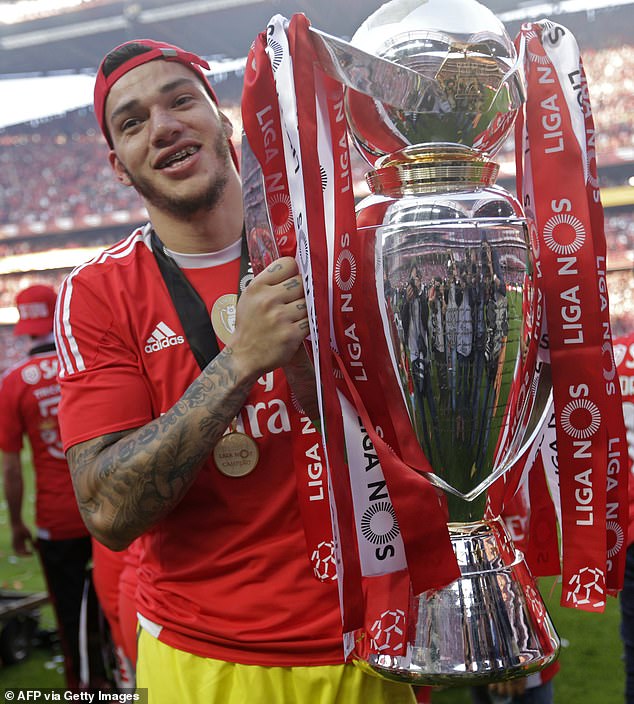 Ederson left Benfica for Ribeirao, at the time in the second tier of Portuguese football, and, one season later, joined Rio Ave, who were coached by Nuno Espirito Santo. He was back-up to Jan Oblak, who was on loan from Benfica and is now at Atletico Madrid.

‘We called him “Duck” because of the way he walked,’ laughs Brazilian full back Lionn, a team-mate at Rio Ave. ‘It’s still hard for me to call him Ederson. We had a lot of fun together. We’d hang out and have dinner, get to know places in Portugal.’

They also shared a passion for tattoos and Lionn reveals Ederson, since his move to Manchester City, has bought a machine to do some of his own ink work.

‘He does not draw, but probably is able to do some nice things,’ says Lionn. ‘He loves it. We went together for tattoos a few times. He’s the kind of guy who sees a nice drawing on his phone and says, “Hey, I’ll tattoo it”. So he gets inked and life goes on.

‘I was with him when he got the rose tattoo on his neck. He slept on the table, man. I asked him how he could sleep through it and looked at me, laughing and said, “I don’t feel pain, idiot”.’

Ederson stepped up when Oblak returned to Benfica and Nuno’s Rio Ave team enjoyed a memorable season in 2013-14, reaching the finals of both the Portuguese Cup and League Cup.

They were beaten on both occasions by Benfica — on their way to a domestic Treble with Oblak in goal — although the young Brazilian keeper was making an impression on his Rio Ave team-mates. 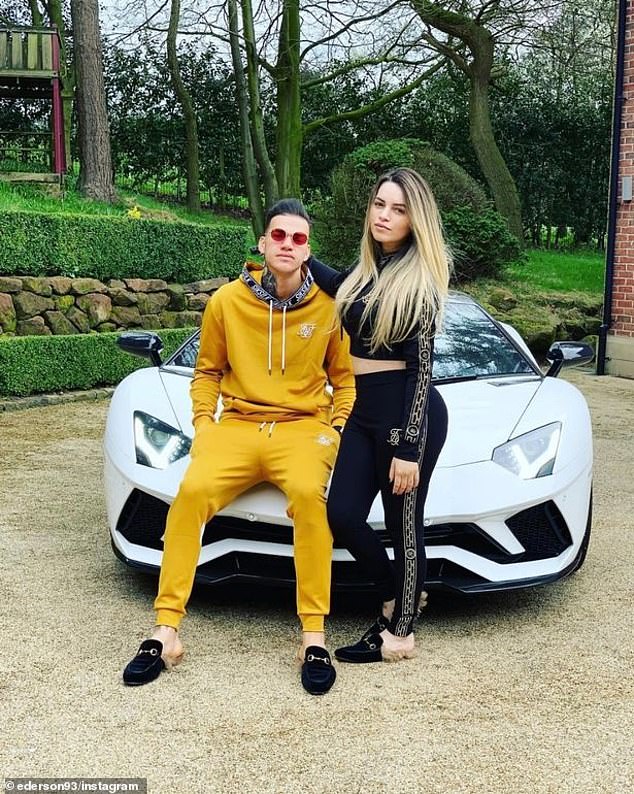 The goalkeeper, arguably the best in the world, has been married to his wife Lais since 2014

‘Ederson was very motivated,’ says former striker Joao Tomas. ‘Always with the ball after practice, trying to learn. He was creative and made small bets of how he could score.’

Marcelo dos Santos Ferreira, a Brazilian defender who now plays for Pacos Ferreira, recalls a bet made with Ederson about kicking the ball higher than the towering stands at Braga’s Municipal Stadium, built inside a quarry.

‘Of course he could kick the ball above the stadium,’ says Marcelo. ‘He was so strong when it came to kicking the ball that he needed to learn how to use it better.

‘Teams tried to pressure him and he would make a good pass to our attacker. We had quick players and it worked out well for us. We achieved a lot. Now he’s the best goalkeeper in the world, especially with his feet.’

Oblak left Lisbon for Atletico Madrid in 2014 and Benfica swooped for Ederson the following year, before his move to City, where he has proved the perfect keeper for Pep Guardiola’s style.

‘With his feet he is the best,’ said Guardiola, when asked to rate him alongside Victor Valdes and Manuel Neuer, his keepers at Barcelona and Bayern Munich. ‘The quality of pass I would say is the best.’ 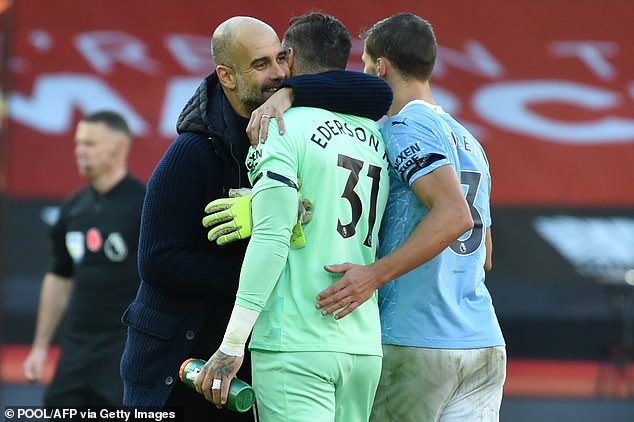 At 27, Ederson has just 11 Brazil caps but is included in Tite’s squad for next month’s World Cup qualifiers against Paraguay and Ecuador, and will go to this summer’s Copa America to contest the starting role with Liverpool’s Alisson.

‘Ederson is the best goalkeeper in the world with his feet and he gets better every day,’ says Claudio Taffarel, 1994 World Cup-winning keeper and now Brazil’s goalkeeping coach. ‘Perfect at passing no matter the distances, and he controls the ball with ease.

‘Ederson and Alisson are different, they both have their qualities. They are on the highest level of goalkeeping. One thing they have in common is they are both cool during games. It is hard to say who will be Brazil’s No 1.

‘We have two games at the qualifiers and Copa America during this next period and we have to wait to see how they will be when they get to us.’

But first, the small matter of a Champions League final. 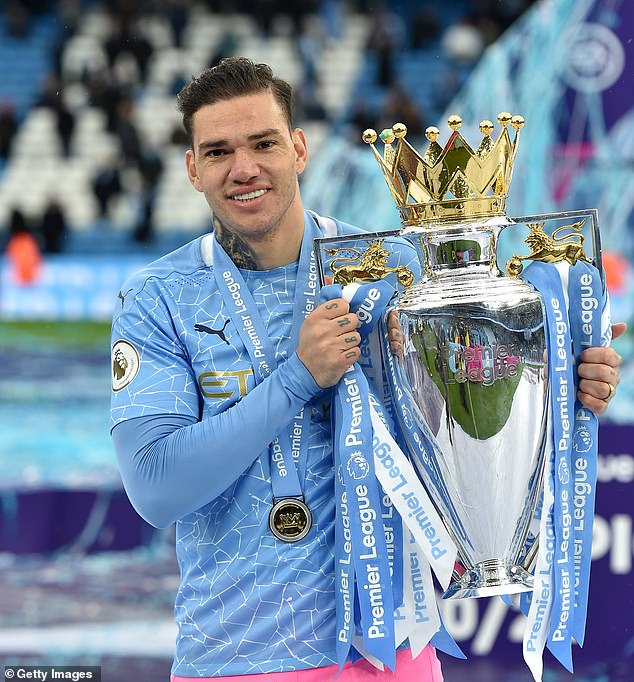