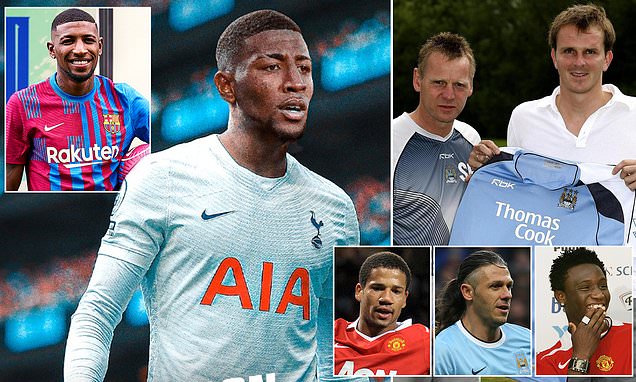 Tottenham new boy Emerson Royal is the latest star to move clubs TWICE in the same transfer window after being bought, then sold, by cash-strapped Barcelona… but who else has done the same?

Emerson Royal’s summer has been topsy-turvy to say the least. One minute he’s a Real Betis player, then he’s starting for Barcelona, now he’s at Tottenham.

The Brazilian international began this summer expecting to be at the Camp Nou for the next three seasons, after the Catalans exercised at £5million clause in his contract to sign him from LaLiga rivals Betis.

But Barcelona’s financial problems means Royal’s time playing for one of the world’s biggest clubs has last just under three months, with just three LaLiga starts to his name. 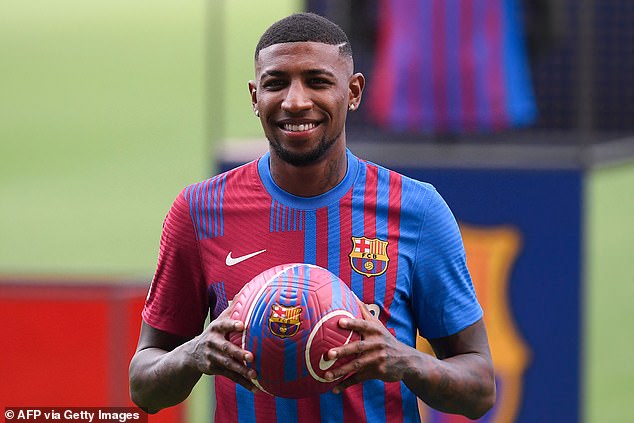 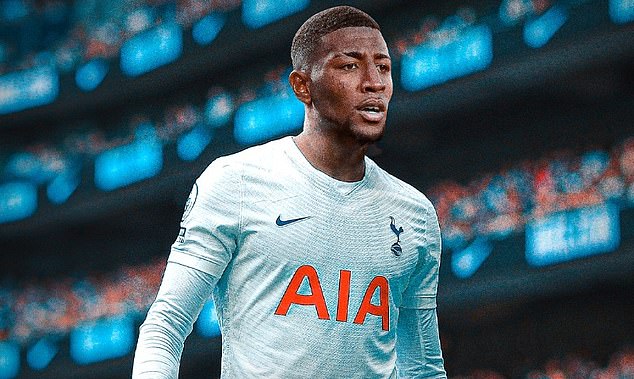 Now the 22-year-old has joined Tottenham in a £25.7m deal and can now settle down and focus on his football – but who else has endured a similar summer by moving to two different clubs?

Liverpool legend Didi Hamman endured some of the best years of his career at Anfield.

The German midfielder spent seven years on Merseyside, helping them to a Champions League final victory in 2005 by coming on at half-time when they were 3-0 down with the Reds going to draw the game 3-3 and win on penalties.

But a year after that triumph in Istanbul, Hamman left the club on a free transfer and signed a pre-contract with Bolton Wanderers in June. The former Liverpool man said it was a tough decision to leave the Reds but joining Sam Allardyce’s team was the ‘best move for my career’. 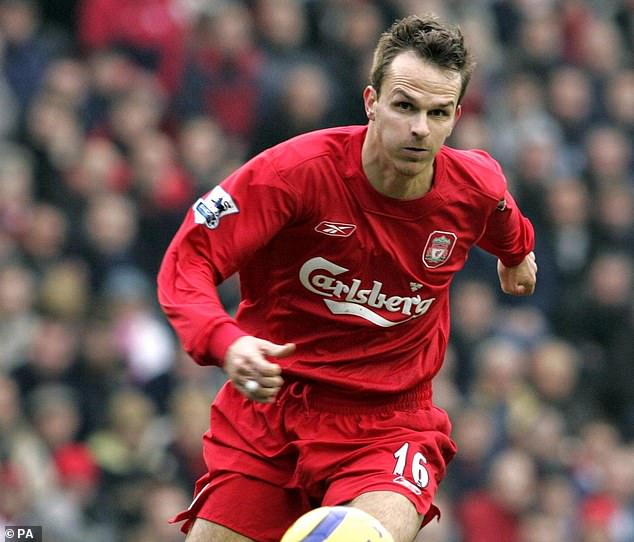 He was due to link-up with the club in the middle of July, but suddenly had a change of heart as Manchester City expressed an interest in signing the German midfielder.

After linking up with his club on July 11, he was named as a City player on July 12, with City paying Bolton £400,000 in compensation.

Wanderers boss Allardyce, meanwhile, was livid with Hamann for changing his mind before he had even kicked a ball for the club.

He said at the time: ‘Hamann didn’t tell the full story when he tried to get out of the agreement he had with us. 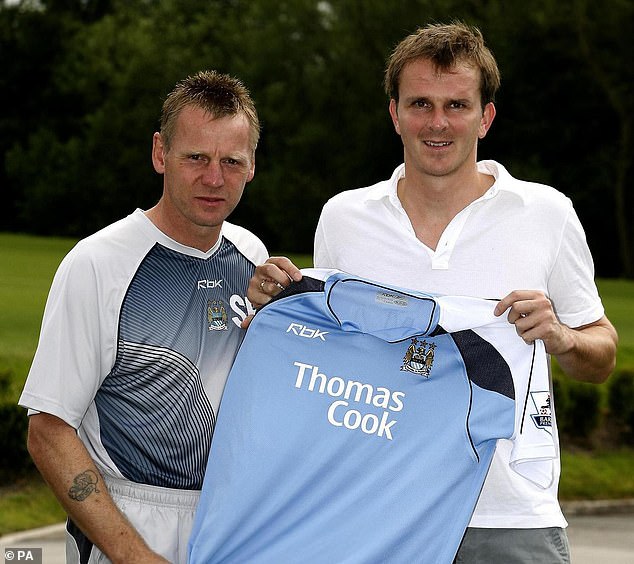 Hamann’s decision appeared to be the wrong one, as Bolton finished higher than City the following season, with a seventh-placed finish for Wanderers earning them a UEFA Cup spot. City ended that season in 14th.

The German’s time at City lasted three seasons, before ending his career at MK Dons in League One.

Sir Alex Ferguson did not make many bad signings during his time at Old Trafford. The decision to spend £7.4million on unknown Portuguese winger Bebe, however, was one of them. 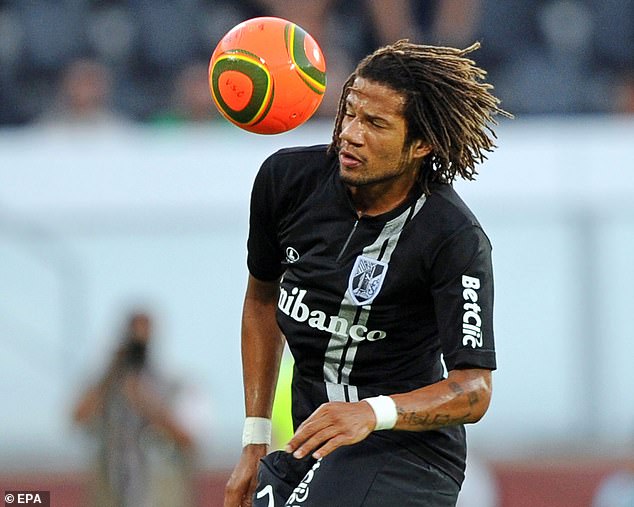 The young winger was recommended to Ferguson by his assistant Carlos Queiroz with the view of him being the next Cristiano Ronaldo.

While Ronaldo had impressed during first-team games for Sporting Lisbon, Bebe’s experience was slightly different in comparison.

He had only scored four goals for Portuguese third tier side Estrela the season before and was snapped up on a free transfer by top-flight side Vitoria de Guimaraes.

After scoring five goals in six pre-season matches for Vitoria, his release clause was raised from £2.5m to £7.4m, just in time for United to make a shock move for him. 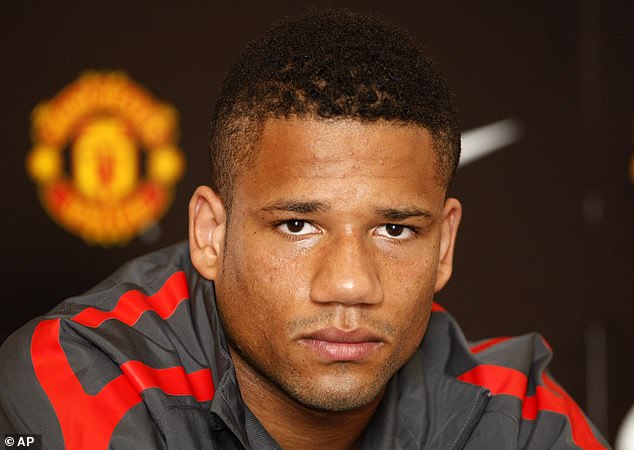 Bebe’s time at Old Trafford, however, was not particularly memorable. He was handed some first-team chances by Ferguson but ended his first season with just two goals in seven appearances.

After that season, he would never don the red of United again, heading back to Portugal on several loan deals before joining Benfica permanently in 2014, but his career did not take off there either.

Now 31, Bebe is still playing today at Spanish top-flight side Rayo Vallecano, after helping them achieve promotion from the second tier last term.

Argentine centre-back Martin Demichelis enjoyed three good years at Spanish side Malaga, taking them from near-relegation to the Champions League during his time at the club.

Demichelis even scored the club’s first ever Champions League goal in 2012, but ended up leaving the club two years later on a free transfer, with Atletico Madrid picking him up.

However, just two months into his time in the Spanish capital, former Malaga boss Manuel Pellegrini came calling as he wanted to bring the defender to Manchester City. 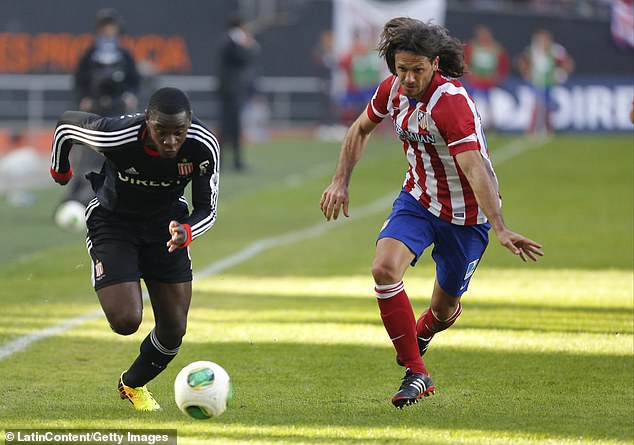 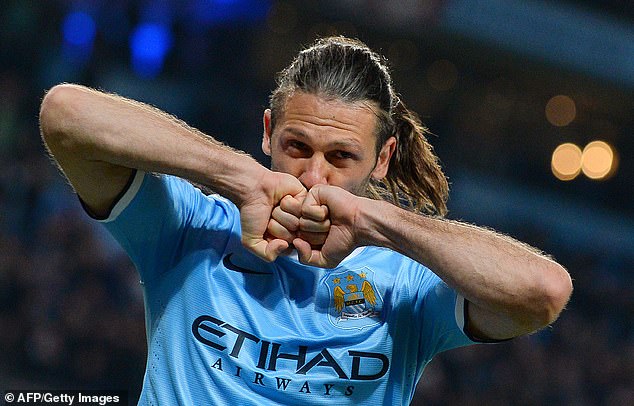 The super-rich Premier League side ended up paying just over £4m for a player Atleti signed for nothing just a few weeks before.

Demichelis was a regular at the back for City during their title-winning season in 2014. He would go on to spend another two years at the Etihad Stadium before moving to Espanyol in 2016, then returning to Malaga just six months later.

The Argentine is now at another former club, Bayern Munich, but the 40-year-old is manager of the German giants’ second team.

Brighton have just snapped up Spanish defender Marc Cucurella from Spanish side Getafe, but the left-back’s journey to the south coast club is another rollercoaster ride.

In the summer of 2019, Cucurella had just completed a successful loan spell at LaLiga side Eibar, who made the deal permanent by exercising a £1.7m buy-out clause in his contract.

However, Barcelona included a buy-back clause of £3.5m in his contract which could be activated at any time. What Eibar were not expecting is Barcelona activating that clause just 16 days later.

Cucurella then moved back to Barcelona but did the Catalan side want to keep him? Absolutely not. 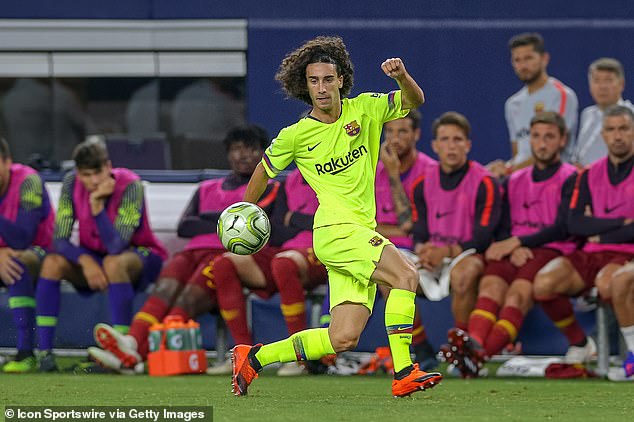 Barcelona loaned Marc Cucrella to Eibar, signed him again, then loaned him out in one summer 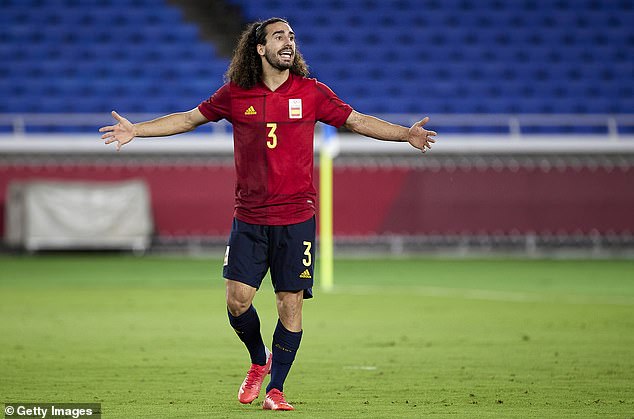 The left-back was then loaned out to Getafe with the option to make the deal permanent for £5m at the end of the 2019-20 season. Getafe did exactly that, but Barcelona chose not to include any other clauses in the deal.

Three different moves in one summer. Let’s hope he didn’t end up buying a house in Barcelona or in the Basque country that year.

Benik Afobe was tipped for great things during his Arsenal days, but has never really made any ripples in the Premier League during his career.

His best chance of making a name for himself in the top-flight came at Bournemouth, when Eddie Howe splashed out £10m on him in the 2015-16 season.

Afobe scored 11 goals for the Cherries in his first 18 months at the club but found himself out of favour at the start of 2018.

The striker was then loaned out to his former club, Wolverhampton Wanderers, scoring six goals in the final months of the season to earn promotion for Nuno Espirito Santo’s side. 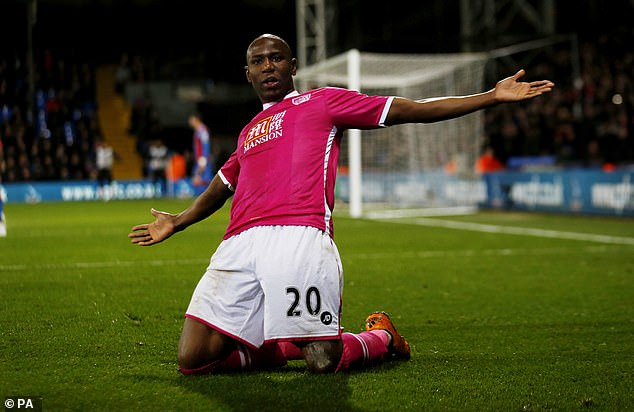 Benik Afobe struggled at Bournemouth and was loaned to Wolves, who signed him for £10m 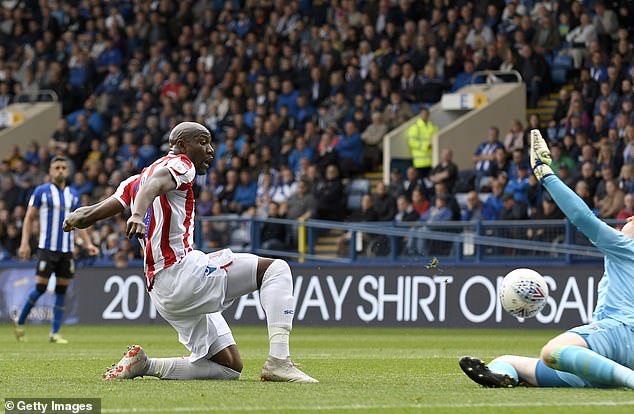 Just as Wolves made Afobe a permanent signing, they sold him to Stoke for £12m in 2018

Wolves then splashed out £10m themselves to make the deal permanent ahead of their first season back in the top-flight, but Stoke City tested their resolve with a £12m bid after he secured the move to Molineux.

The bid worked and Wolves made a profit on Afobe in the space of a few weeks. Stoke, meanwhile, did not get the Afobe that dazzled at Molineux, with the forward scoring just nine times in 49 games that season.

Afobe is still on the books at the Potters, but has spent the last three years on loan at Bristol City, Turkish side Trabzonspor and is currently at Millwall.

WHO ELSE HAS MOVED TWICE IN THE SAME WINDOW?

Back in the summer of 1980, Clive Allen was one of the top strikers in the country and the teenager joined Arsenal for what was then a whopping £1.25m from QPR.

Even though the forward had scored 32 goals in 49 games for the west Londoners the season before, Allen never actually got his chance at Arsenal, with the club swapping him for Crystal Palace left back Kenny Sansom that summer.

That deal worked well for Arsenal, with Sansom spending seven seasons at Highbury and playing nearly 400 times, going down as one of the Gunners’ best ever defenders.  Palace, meanwhile, were relegated that season, even though Allen was their top goalscorer with nine First Division goals. 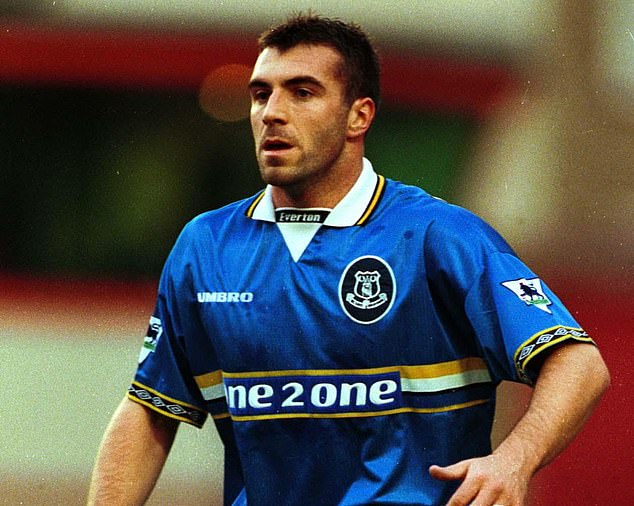 David Unsworth came through the youth ranks at Everton but joined West ham in the summer of 1997 after making over 100 appearances for the Toffees. Unsworth’s family struggled to settle in London so the defender asked for a move closer up north to Merseyside.

Unsworth joined Aston Villa a year after joining the Hammers but his family didn’t like it in Birmingham either. Before the 1998-1999 season had even begun, Unsworth asked for a move back to Everton, which was granted.

The defender made another 188 appearances for Everton in his second spell there and became part of the coaching set-up at Goodison Park after retiring. 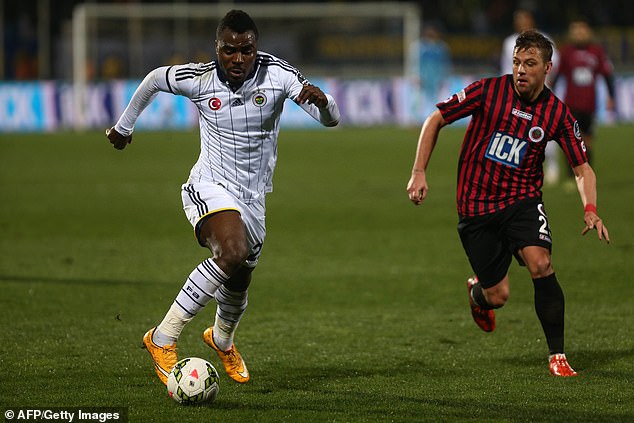 Emmanuel Emenike also moved to Fenerbahce in 2011, then left that summer, before rejoining

Former West Ham striker Emmanuel Emenike also had two moves in one window, joining Fenerbahce for £7.4m in the summer of 2011 – but the striker was embroiled in a match-fixing scandal, which he was cleared for, so the Turkish side ended up selling him to Spartak Moscow for a £1m profit a few weeks later.

Perhaps Fenerbahce were too hasty, as Emenike went on to score 24 goals in 51 matches, but the Turkish giants then splashed out £11m for him two years later, scoring a similar amount of goals for them.

AND WHAT ABOUT THE CURIOUS CASE OF JOHN OBI MIKEL?

In 2005, both Manchester United and Chelsea wanted to sign Nigerian midfielder John Obi Mikel from Norwegian side Lyn.

United announced in April of that year that they had agreed a £4m deal for the midfielder, but the player would arrive in January 2006.

The only problem was that Chelsea also agreed they had struck a deal to sign Mikel, with Lyn denying that transfer existed. Mikel then did a press conference at Manchester United, where he held up the number 21 shirt and revealed his delight of moving to Old Trafford. 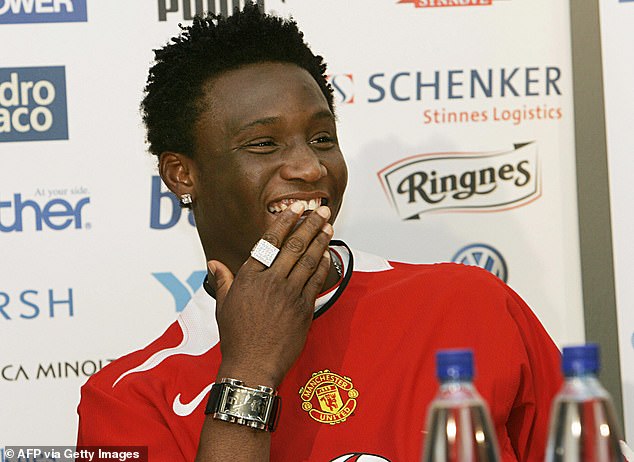 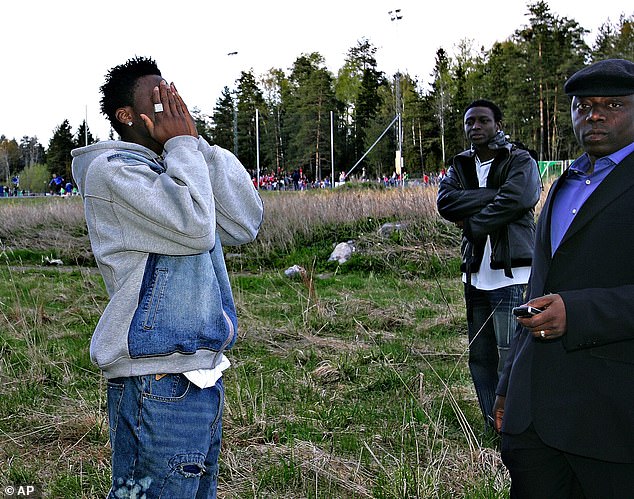 Mikel then claimed he wanted to join Chelsea, who said he also agreed a deal with that year

But in May 2005, Mikel – who was still contracted to Lyn – went missing during a Norwegian Cup game after watching the match from the stands.

Norwegian media hinted that the midfielder could have been kidnapped after previously reporting claims of threatening phone calls from unknown numbers.

Instead, Mikel emerged from a London hotel three days later, accusing United of trying to force him to sign a contract with them without his agents, and claiming that he actually wanted to join Chelsea after all. 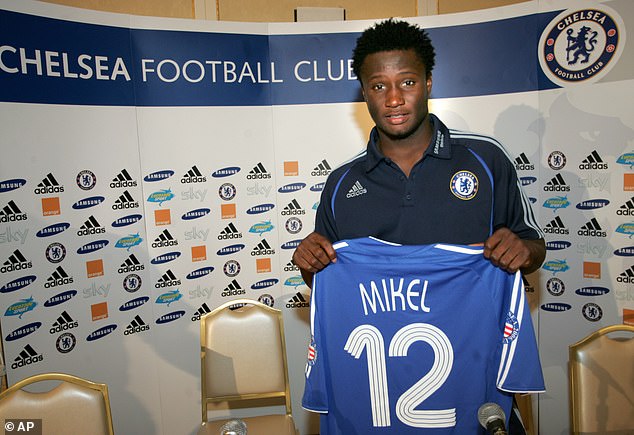 Chelsea then signed Mikel in 2006, paying Man Utd £12m for the player they never used

United reported Chelsea to FIFA for tampering with the deal they had, but football’s governing body found no evidence to accuse them. Mikel refused to return to Lyn, but FIFA overruled that decision.

Eventually, when United’s deal for Mikel was set to get underway, Chelsea stepped in to negotiate a deal with Manchester United. They reached an agreement in the summer of 2006, with Chelsea paying the Red Devils £12m for the player, whilst also giving Lyn the £4m fee United were meant to pay the Norwegian.

Mikel went onto play nearly 400 times for Chelsea until he left 11 years later, winning two Premier League titles and one Champions League trophy with the Blues.