Sydney FC have kept the W-League premiership race alive – for another 24 hours, at least – and avenged their heavy derby defeat from earlier in the season with a 3-0 victory over the Western Sydney Wanderers.

The Sky Blues proved there is plenty of life left in them after the loss of Matildas stars Caitlin Foord and Chloe Logarzo to English clubs, taking the lead in just the second minute through Veronika Latsko and completely dictating terms to a team that put five goals past them the last time they met. 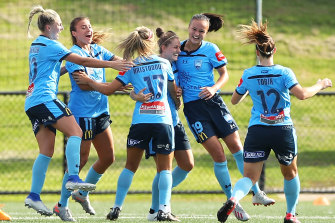 Ellie Brush celebrates with her Sydney FC teammates after scoring the second goal against the Western Sydney Wanderers on Saturday.Credit:Getty Images

Crucially, the result ensures Sydney remain a mathematical chance of finishing top, albeit not a particularly realistic one. A draw at Cromer Park in Manly would have locked in the premiership for ladder leaders Melbourne City  but they can sew it up on Sunday with a win in their rescheduled derby against Melbourne Victory.

Second spot, however, carries with it the advantage of a home semi-final, and the Sky Blues are now odds-on to clinch it after opening up a three-point gap ahead of the third-placed Wanderers with two rounds to go in the home-and-away campaign.

The Wanderers, meanwhile, will go into their clash with City next weekend having lost three of their last four games. Their early season momentum is an increasingly distant memory.

Making matters even worse, they won't have two of their most important players on deck against City.  Key midfielder Ella Mastrantonio copped her fourth yellow card of the season, triggering an automatic one-game ban, while import striker Kristen Hamilton was sent off when a late tackle on Ellie Brush earned her a second caution of the match and reduced the Wanderers to 10 players for the last 25 minutes.

It meant Dean Heffernan's side were desperately short on the sort of quality that powered the first half of their campaign, and they found themselves on the back foot from the outset.

Latsko punished their failure to clear a cross from Sofia Huerta to give the Sky Blues an early lead in front of a terrific crowd of 2309.

It was doubled in the 14th minute, when Brush bobbed up at the back of a pack of players to head in a Teresa Polias corner kick.

Though Sydney were in control of  possession and territory, the Wanderers had a couple of bright moments going forward.  Courtnee Vine's header forced a good save from goalkeeper Audrey Blesloe, and Matilda Amy Harrison rattled the crossbar with a long-distance strike halfway through the first half.

Heffernan made two changes at the break, sending on Alexandra Huynh and Liana Danaskos in a desperate but ultimately fruitless attempt to change the course of the contest.

Huerta added the cherry on top for the Sky Blues in added time with a pearler from the edge of the box.