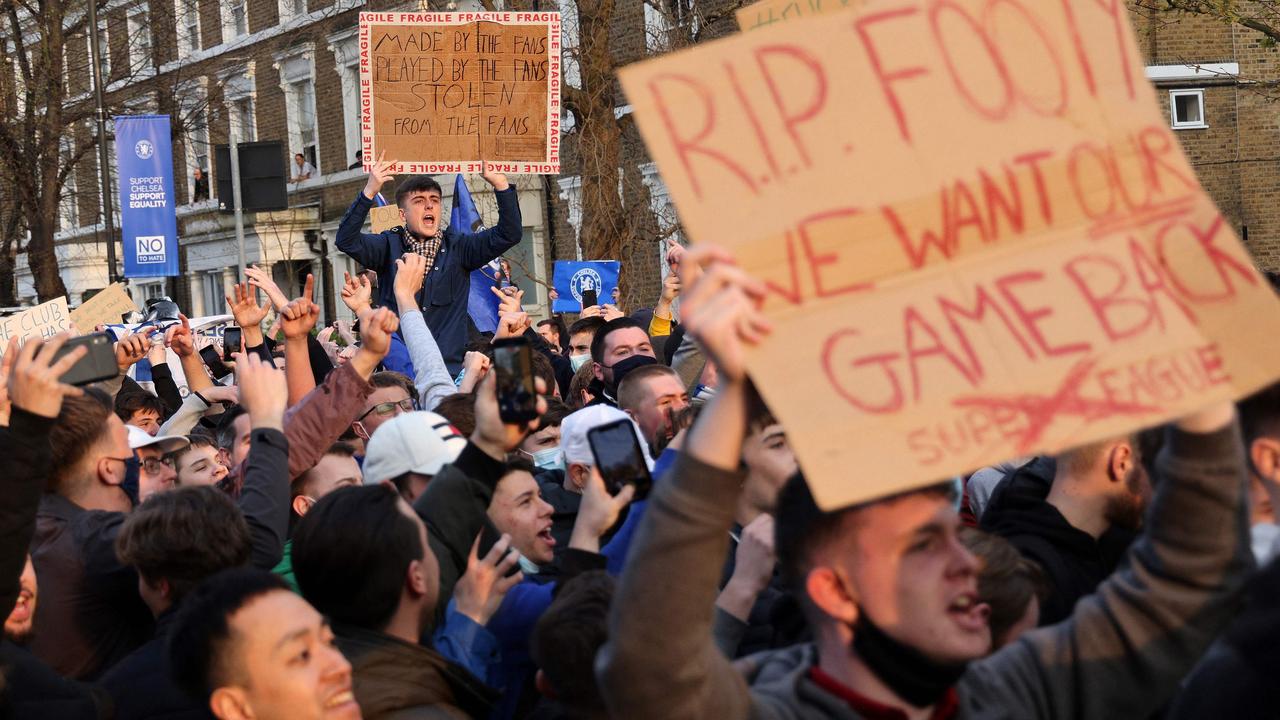 Chelsea and Manchester City are set to withdraw from proposals for a European Super League after a furious backlash against the controversial plan, which was floated less than 48 hours ago.

Chelsea and City were two of 12 leading European clubs to sign up to the breakaway league on Monday (AEDT).

But reaction to the incendiary scheme has been scathing, with politicians and football authorities threatening to take legal action against the so-called “dirty dozen” and potentially ban them from domestic leagues.

Manchester United, Liverpool, Arsenal, Tottenham, Juventus, Inter Milan, AC Milan, Real Madrid, Barcelona and Atletico Madrid were the other 10 sides to agree to the plan. However, reports have emerged that Atletico and Barcelona are both also considering withdrawing.

Chelsea and City’s decision to backtrack could spark the collapse of a project that has prompted outrage across the world.

The Athletic and the BBC reported that Manchester United executive vice-chairman Ed Woodward has resigned. There are also unconfirmed reports Juventus chairman Andrea Agnelli is preparing to quit his post too.

Earlier, UEFA president Aleksander Ceferin told the clubs it was not too late to admit they had made a mistake.

“Gentlemen, you made a huge mistake,” said Ceferin. “Some will say it is greed, some complete ignorance of England’s football culture. There’s still time to change your mind. Everyone makes mistakes.”

There were incredible scenes outside Chelsea’s Stamford Bridge stadium as fans gathered to protest against the plan ahead of their side’s Premier League match against Brighton.

Less than two hours after the protesters made their feelings known, it was first reported that Chelsea were preparing documentation to become the first club to withdraw from the competition.

The BBC reported that Blues owner Roman Abramovich is understood to have driven the decision.

The backlash has been severe.Source:Getty Images

There’s been universal outrage over the breakaway group.Source:Getty Images

Former Chelsea goalkeeper Petr Cech, now the club’s technical advisor, had come out of the stadium in a bid to persuade fans to clear the roads as the home side’s team bus was held up by the protest, causing kick-off to be delayed by 15 minutes.

Cech was heard shouting “give us time” before being drowned out by angry protesters.

The 20-team competition was designed by the European giants to guarantee revenue from regular matches against one another without the risk of failing to qualify for 15 founder members.

The 12 teams had signed up to share an initial pot of over $5.4 billion. However, the plan was fiercely criticised by even their own players and managers for acting as a closed shop.

“It’s not a sport when the relation between effort and reward doesn’t exist,” said Manchester City boss Pep Guardiola.

Manchester United forward Marcus Rashford shared an image on Twitter of one of the banners which covers the stands at Old Trafford.

The banner carries a quote from the club’s legendary former manager Sir Matt Busby, which reads: “Football is nothing without fans.”

All that needs to be said.Source:Getty Images

No wonder the match was delayed.Source:Getty Images